Right to Work Defeated in Montana and Colorado

In Montana, union members from around the state came to the Capitol to pressure lawmakers into voting against the bill. However, a Right to Work bill continues forward in New Hampshire 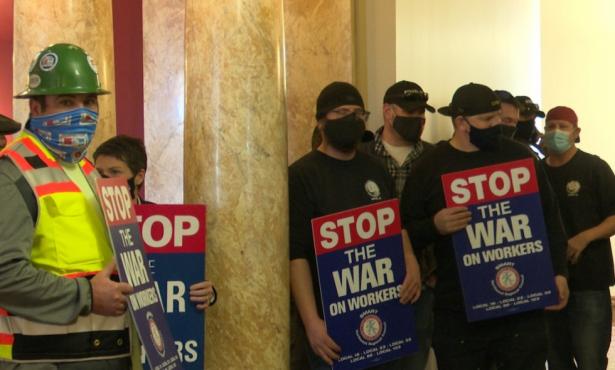 Montana and Colorado have both stopped attempts to pass Right to Work laws and will continue to be free bargaining states.

In Montana, Republicans have control over the entire state government, a first in over 16 years. Yet, over the past month, union members and employers have successfully pushed legislators to vote against Right to Work. On Tuesday, with union members filling the gallery and lining the hallways, legislators voted down the bill by a vote of 38 in favor to 62 opposed. In a show of bipartisanship, 29 Republicans joined with 33 Democrats in opposing the bill.

In speaking in opposition to the bill Rep. Derek Harvey, a Democrat from Butte spoke about the role that unions played in his city producing the copper that fueled the industrial revolution, electrified the nation, and supplied ammunition during both World Wars.

"I know my past. I know my town's past. I also know the history of a man named Frank. Frank (Little) was standing up for his fellow workers when one night he was drug out of his boarding house and beat nearly to death and drug behind a car through the center of my district," Harvey said before going on to list the Anaconda Road massacre and labor strikes of 1914 that led to martial law in his district. “This is an outrageous bill, and it's an outrage that it's made it (this far) through the process.”

Members from around the state came to the Capitol to pressure lawmakers into voting against the bill.

“These are not partisan members,” said Al Eklbad,  Executive Secretary of the AFL-CIO, who was among those in the hallway. “These are people who believe in their collective bargaining rights. They vote for a lot of different issues but the bottom line is our membership will stand for its right to collectively bargain.”

In Colorado, a similar Right to Work bill was rejected. By an 8-5 party-line vote, the House Business Affairs and Labor Committee voted down the bill. “What we didn't hear today was any examples of people saying that they had bad impacts from a union,” committee chair Dylan Roberts said. “What we did hear a lot of evidence of was the benefit of a union for workers across the state from all different types of professions. We certainly need to take more steps, whether government or non-governmental, to improve our economy but I don't think that this is one of those things.”

Mark Thompson, a member of the United Brotherhood of Carpenters and Joiners of America testified against the bill saying “This is union-busting legislation — it always has been, always will be. This is strictly to weaken unions.”

Brian Young is a staff member at UCOMM Communications