The Privatization of Vaccination

Massachusetts spent 20 years refining its own mass vaccination plan. Then it looked elsewhere. 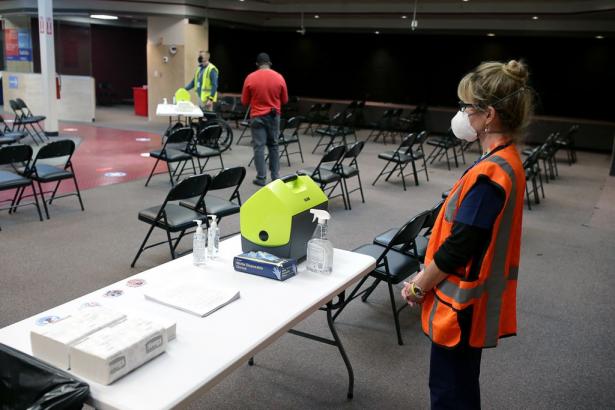 Massachusetts spent nearly two decades and millions of dollars planning how it would mobilize its vast network of local public health departments to respond in an emergency situation.

But just days after federal drug regulators authorized the first COVID-19 vaccine in mid-December, the state abandoned its blueprint and instead entrusted a handful of private companies with running its mass vaccination sites.

One company — Curative, a barely year-old California startup that’s scaling testing across the country — was introduced to the state’s pandemic response team on Dec. 15 in an informal, three-sentence e-mail from a senior adviser at Partners in Health. Days later, CIC Health, a newly formed company working with the state on testing, expressed interest in quarterbacking a Massachusetts vaccination effort.

And within weeks, those two private entities, along with a third, were awarded no-bid contracts to undertake perhaps one of the state’s most pressing, ambitious initiatives in modern times.

In issuing the contracts, the state sidestepped the planning infrastructure it built in response to the 9/11 terrorist attacks and the anthrax-letter scare in 2001. The goal then: Prepare for an unseen, major health catastrophe, which could require mass vaccinations.

“We have been talking about this for 20 years . . . the state has invested in this,” Dartmouth public health director Christopher Michaud said. “They took the playbook, threw it in the dumpster, and privatized the whole thing.”

The blueprint laid out a regional approach for corralling the state’s 351 local health departments in an emergency, and a recent, updated status report on the playbook shows the groups were equipped with detailed plans for how to open and operate vaccination sites.

Massachusetts is hardly alone in using private contractors for some aspects of its COVID-19 vaccine rollout. Virginia, for example, is one of more than 20 states using PrepMod, the same software vendor tapped by Massachusetts to help residents schedule vaccine appointments. But unlike Massachusetts, Virginia and a number of other states have kept outside contractors from operating vaccine clinics, relying instead on local health departments and public workers.

Governor Charlie Baker’s administration has insisted that public health officials are playing a role in vaccinating the population. Some municipalities and health care facilities, for example, run a network of high-capacity, regional clinics separate from the state’s mass vaccination sites. Other local officials will be leaned on to vaccinate hard-to-reach populations such as the homebound who may be unable or unwilling to visit a clinic.

Officials with the state’s COVID Command Center declined an interview request, but released a statement saying the state “contracted with a number of vendors with experience in large scale COVID-19 testing logistics and operations, as well as vaccination efforts, that also had the bandwidth to swiftly scale up operations to meet the demands of this unprecedented effort.”

The command center said it gets daily updates from the contractors and closely tracks progress and performance.

The state is all-in on its large-scale vaccination sites, which, so far, have pushed out roughly 11 percent of the doses administered across Massachusetts. That number is sure to increase — hospitals were the first to administer doses, many to their own staffers.

So far this year, mass vaccination sites have been the third most trafficked locations for doses, right behind pharmacies and hospitals. The sites are set to serve more of the broader public once others are eligible for doses.

So far, results have been mixed. Some sites drew early criticism about long lines and unclear communication, as well as worry that their locations were hard for people of color and other marginalized communities to access. But others have reported a seamless, efficient process, with minimal waits.

“We need mass vaccination sites, I don’t think anyone is denying that,” said Sigalle Reiss, president of the Massachusetts Health Officers Association and Norwood’s health director. “But the state’s plan tells me they don’t understand public health, and how to get people vaccinated, you have to go local.”

Christine Bongiorno, the director of health and human services in Arlington, said she and other leaders from the Greater Boston area were taken aback. They have “a lot of frustrated volunteers sitting around saying, ‘Why aren’t you calling us? We’re here.’ ”

In Dartmouth, municipal officials launched a vaccination site at Dartmouth High School, following the protocol spelled out in its several emergency planning binders. But with limited vaccine supply, it could only run one-off, one-day clinics, although still vaccinating roughly 1,000 people at a time.

Just 4 miles away, the state helped Curative launch a mass vaccination site at a former Circuit City store, with little coordination between the company and Dartmouth officials. That site is expected to deliver 1,500 shots a day.

The state’s contracts with its three mass vaccination site providers — Curative, CIC Health, and LabCorp — incentivize shots in the arm, and in some cases reward the companies for the number of doses they administer.

Curative — which runs the Circuit City, Danvers DoubleTree, and Eastfield Mall in Springfield vaccination sites — seeks insurance reimbursements for the vaccines it administers, according to Isaac Turner, the startup’s chief information officer and cofounder. But the state agreed to chip in $45 for every shot not reimbursed. The state also pays Curative roughly $95,500 on a weekly basis to cover security services and a few staff positions, according to the contract obtained by the Globe.

CIC Health and LabCorp inked deals that guarantee them money up front for the cost of vaccine administration and additional expenses.

CIC Health can collect more than $1 million per week from the state, including money for marketing and site expenses, when Fenway Park and Gillette Stadium each administer 8,750 shots per week. The financial benchmarks are scaled, meaning more shots means more money. LabCorp, a global life sciences company that has processed thousands of COVID-19 tests in Massachusetts, can collect an estimated $780,000 weekly, including reimbursement for signage and security costs, when it delivers 21,000 shots per week at the Natick Mall, according to a contract reviewed by the Globe.

It is likely that the state will take advantage of federal reimbursement money to cover the cost of its vaccine rollout, a program President Biden expanded in January. Massachusetts also received roughly $2.7 billion from the CARES Act to fund general costs stemming from the public health emergency.

Bongiorno, the health director in Arlington, said she was surprised the state chose to contract outside companies to run its seven mass vaccination sites.

“We have a number of communities already ready and able to do this at such a low cost,” she said.

The Baker administration’s reliance on private vendors is not necessarily problematic, said Barbara Anthony, a senior fellow in health care at the free market-minded Pioneer Institute, a Boston think tank. It’s the public policy underlying the choices — and the lack of transparency — that’s concerning, she said.

“There is a lot of money at stake for these entities and the public has a right to know that and understand that,” said Anthony, a former state undersecretary for consumer affairs and business regulation.

The state’s move to prioritize privately run mass vaccination sites appears to have occurred in a tight timeframe, according to interviews, e-mails, and contracts obtained by the Globe.

Renowned surgeon and writer Atul Gawande, who cofounded CIC Health, said that as the FDA was approving COVID-19 vaccines in mid-December, “it was clear the distribution capability wasn’t there.”

“I approached the Brigham, Gillette Stadium, Fenway, and ultimately, Roxbury Community [College],” Gawande said in an interview last week. “The state approached us as potential partners and it was basically matchmaking to say, ‘How can we move as fast as possible to get this off the ground?’ ”

Curative has a team that scopes out areas of the country where it could expand, and Turner, a company executive, told the Globe that Massachusetts “wanted someone to move quickly.” Before it dove into vaccinations, Curative was already providing a million coronavirus tests a week in 15 states, according to a press release.

“We have the ability to step up and scale up,” said Turner, cofounder of Curative. “I think a company like Curative that spent a year trying to solve this problem [for testing] is actually better placed than most.”

Senator Jo Comerford, chair of the joint committee on public health, asked the Baker administration for copies of all of its vaccine vendor contracts at an oversight hearing last week. She said she wanted to “better understand quality control measures embedded in these contracts” and how the state is overseeing them.

“I don’t have a sense of how they determined the need for a particular service,” she said. “I want to know how [the vendors] are being overseen.”

Deanna Pan of the Globe staff contributed to this story.