labor The Filibuster Is a Labor Issue

The PRO Act will not pass unless we end the filibuster. Those two things are a package deal. 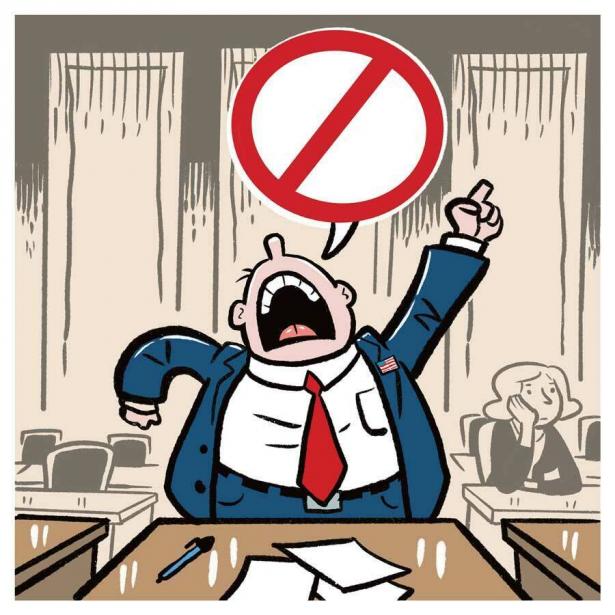 Why Democrats Need to End the ....., Illustration by Terry LaBan

On Tuesday, the House passed the PRO Act, the sweeping labor law reform bill that would re-energize unions in America. If it were to become law. Which it will not, as long as the filibuster remains in place in the Senate. The situation now is very simple: destroying the filibuster is a labor issue.

The Senate, an anti-democratic institution by design that exists to squash the dreams of the majority of our nation’s citizens, is evenly split, controlled by Democrats by only a single vote. It currently takes 60 votes to overcome a filibuster, meaning that ten Republicans would have to join all of the Democrats to push through the PRO Act. There is zero chance of this happening. (Frankly, I doubt that every Senate Democrat would even line up behind the PRO Act if the Chamber of Commerce lobbyists really started putting the screws on them, but that is purely academic at this point.) On top of that, it is hard to imagine any Congressional election in the coming decades that would change the composition of the Senate enough to allow the bill to pass with the filibuster in place. The PRO Act is not bullshit — it is serious, historic, pro-worker reform. That is something that is not now and will never be an issue that a large chunk of Republican senators will flock to support. The donors who pay to elect Republican senators, as a rule, are spending money to prevent a bill like this from ever passing.

So here is where we are: A) Organized labor went all out to get Joe Biden and a Democratic Congress in place, and they know they are owed payback; B) The PRO Act is labor’s highest priority; and C) The PRO Act has virtually no chance of becoming law as long as the filibuster stays in place. To be very gauche and transactional about all of this, words from Senate Democrats now about how pro-union they are do not mean anything at all if they are not accompanied by a commitment to end the filibuster. I would venture to say that it is time to start painting Joe Manchin and Krysten Sinema, the two most outspoken Democrats committed to preserving the filibuster, as anti-union. They will certainly protest, but reality tells its own truth. We need the PRO Act. There is only one way to get it. Being unwilling to do something completely within their power to get the bill passed is indistinguishable from being against the bill. And if you’re against the bill, you are not pro-union.

The AFL-CIO’s executive board is meeting this week, and they are considering the possibility of taking a formal position on the filibuster. They should. AFL-CIO president Richard Trumka has said ​“The PRO Act is our litmus test,” which should imply that opposition to the filibuster is a litmus test as well. At this point, eliminating the filibuster is part and parcel of the progressive reforms that we are all trying to get passed. Claiming to support the PRO Act, or a strong green infrastructure bill, or the voting rights bill, without supporting the end of the filibuster, is like claiming to support going into a building but refusing to open the door. Assuming that you don’t enjoy banging your head against the wall endlessly, you must do one in order to do the other.

It’s good that major unions are running publicity campaigns touting the PRO Act. It will also go down as a lot of wasted effort if we are not able to do away with the filibuster, as it seems rather futile to do all this work to promote a bill that will just languish in a Senate drawer. Ending the filibuster is a labor fight. It is an environmental fight. It is a healthcare fight. It is equivalent to the substance of all these issues themselves, because it is the thing that enables them to happen. There is a coalition to be built on this issue — of every progressive in America who wants tangible gains in the next two years — that is broad and powerful enough to push the Democratic Party where it needs to go.

Any Senate Democrats who don’t like this ultimatum should consider themselves to be on the other side of working people. And we should be sure to tell them that, loudly.