Would undo decades of Southern anti-union laws rooted in racism. 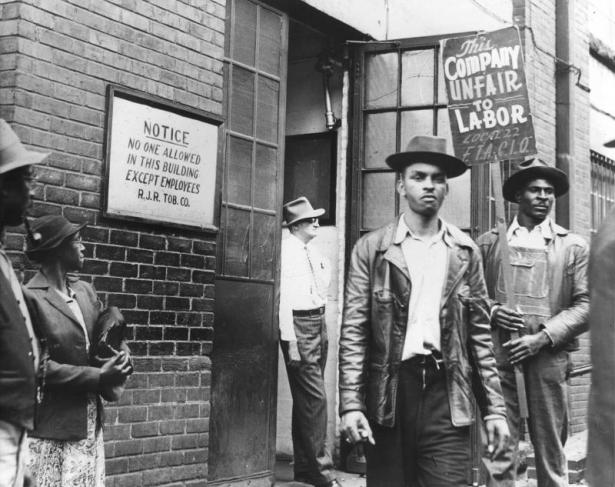 Workers organized with Local 22 in Winston-Salem, North Carolina, staged a strike against Reynolds Tobacco in the 1940s. Right-to-work laws passed in Southern states during the 1940s and 1950s made unionization much more difficult.,

The U.S. House of Representative passed the Protecting the Right to Organize (PRO) Act this week, with 42 House Democrats from Southern states as cosponsors.

The bill is one of the most ambitious attempts to strengthen the rights of workers and unions in decades. Its centerpiece is a provision that would override so-called "right-to-work" laws by allowing unions to collect dues from represented workers in states with such laws even if those workers have not joined the union.

"Unions benefit all workers, but especially women and workers of color," Rep. Nikema Williams, a Georgia Democrat who cosponsored the bill, said in a statement after its passage through the House.

Right-to-work laws proliferated across the Midwest in the mid-2000s. But their roots are in the Jim Crow South, in the milieu of anti-Black racism and anti-Semitism wielded by rich white Southerners and their Northern allies to maintain an economic system built on racial division and cheap labor.

In 1944, Arkansas and Florida became the first two states in the country to enact right-to-work laws. As labor historian Michael Pierce wrote in 2017, the anti-union measures were meant to prevent what industrialists and planters in both the North and South saw as interracial organizing's threat to the racial and economic order. The Christian American Association, a group founded by Texas oil industry lobbyist Vance Muse in 1936, worked to pass anti-strike laws and spearheaded right-to-work campaigns in Texas, Arkansas, Florida, and California.

The campaigns to get those laws passed by ballot initiative — in a time where many Black voters were blocked from the ballot — were explicitly racist in tone and substance. Pierce writes:

During the Arkansas campaign, the [Christian American Association] insisted that right-to-work was essential for the maintenance of the color line in labor relations. One piece of literature warned that if the amendment failed "white women and white men will be forced into organizations with black African apes . . . whom they will have to call 'brother' or lose their jobs." Similarly, the Arkansas Farm Bureau Federation justified its support of Right-to-Work by citing organized labor's threat to Jim Crow. It accused the CIO of "trying to pit tenant against landlord and black against white."

Most Southern states, with the exceptions of Kentucky and West Virginia, implemented their right-to-work laws during the mid-20th century. The Taft-Hartley Act, passed by Congress in 1947, gave these laws federal backing.

Right-to-work laws financially hamstring unions by preventing "union shops," where all employees in a unionized workplace must pay union dues and/or join the union. The PRO Act would weaken these laws by letting unions collect dues even from employees who do not join, but who still benefit from the contract negotiations and collective bargaining done by the union.

"We have a generational opportunity to make America's economy and democracy work for working people again," North Carolina State AFL-CIO President MaryBe McMillan said in a statement. "The PRO Act does that by ending misleading and racist 'right to work' laws and creating meaningful consequences for employers that retaliate against workers for simply exercising their right to organize."

The legislation includes a number of other provisions that would bolster workers' rights to organize and could make union drives — like the ongoing one at an Amazon plant in Bessemer, Alabama — more feasible.  These provisions include banning employer interference in union elections, such as what are known as "captive audience" meetings, a tactic used against organizers in Bessemer. Employers who violate the National Labor Relations Act (NLRA) could face civil penalties, which they currently do not. Corporate directors and company officials could be held personally accountable for violating labor law. Union elections would be set by the National Labor Relations Board and employees and not be subject to the whims of employers. And workers could file a civil action against their employer if the employer violates the NLRA.

The Biden administration has come out swinging in support of the PRO Act, and in support of workers' rights to organize. President Joe Biden released a video signaling his support for the union drive in Alabama, and the White House sent out a statement calling for the PRO Act's passage.

"As America works to recover from the devastating challenges of deadly pandemic, an economic crisis, and reckoning on race that reveals deep disparities, we need to summon a new wave of worker power to create an economy that works for everyone," Biden said in the statement. "We should all remember that the National Labor Relations Act didn't just say that we shouldn't hamstring unions or merely tolerate them. It said that we should encourage unions. The PRO Act would take critical steps to help restore this intent."

The bill was first introduced in Congress last session, when the Senate was still led by Republicans. With Democrats narrowly controlling the Senate this year, it theoretically stands a better chance — but will likely be stymied by the filibuster, which requires a 60-vote supermajority to break. Just one senator from the South has signed on to sponsor the bill to date — Democratic Sen. Tim Kaine of Virginia. Discussions are underway in the Senate about reforming the filibuster, which itself has a long history of being used to block civil rights legislation.

Olivia is a staff reporter with Facing South whose work focuses on democracy, money in politics, the census, and agriculture.

Support the Institute for Southern Studies

Support independent media and a voice for change in the South!