'We Need a People's Vaccine, Not a Profit Vaccine': Sanders Urges Biden to Support Push to Suspend Pharma Patents

At present, the U.S.—along with other wealthy nations where major pharmaceutical companies are based—is blocking India and South Africa's push for a patent waiver, which industry lobbying groups are mobilizing to crush. 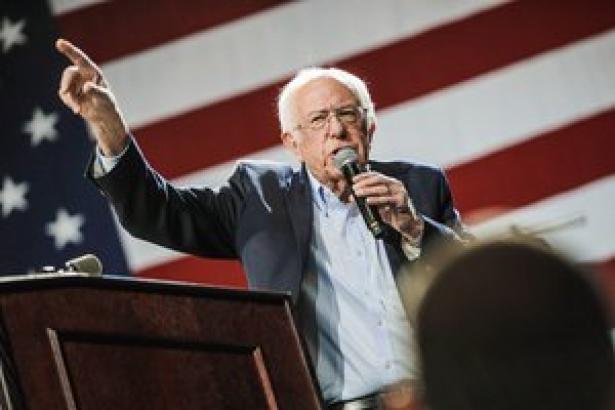 "It is unconscionable that amid a global health crisis, huge multibillion dollar pharmaceutical companies continue to prioritize profits by protecting their monopolies and driving up prices rather than prioritizing the lives of people everywhere, including in the Global South," Sanders said in a video released Wednesday as part of a global virtual "Rally for a People's Vaccine."

"Our government has invested enormous sums of taxpayer dollars into the production of these technologies. All people should benefit, not just a few already obscenely wealthy CEOs and shareholders in the wealthiest country on Earth."
—Sen. Bernie Sanders

In order to ramp up coronavirus vaccine production to meet global need and distribute doses "as quickly as humanly possible," Sanders said "the United States should play a major role in promoting global cooperation and innovation." At present, the U.S.—along with other wealthy nations where major pharmaceutical companies are based—is blocking India and South Africa's push for a patent waiver, which industry lobbying groups are mobilizing to crush.

"Our government has invested enormous sums of taxpayer dollars into the production of these technologies. All people should benefit, not just a few already obscenely wealthy CEOs and shareholders in the wealthiest country on Earth," said the Vermont senator. "We need a People's Vaccine, not a Profit Vaccine."

Less than a week after the Pharmaceutical Research and Manufacturers of America (PhRMA), a leading industry lobbying organization, called on Biden to uphold U.S. opposition to the patent-waiver proposal, Sanders said Wednesday that he is sending a letter to the president demanding his support for the plan "so that we can rapidly expand supplies of vaccines" without the constraints imposed by pharma monopolies.

"Ending this pandemic requires collaboration, solidarity, and empathy. It requires a very different mindset—a mindset that puts people over profits at every turn," Sanders said. "The pharmaceutical companies must not block this effort, and I join you in your request to temporarily waive WTO intellectual property protections on Covid-19 medical technologies during the pandemic."

Sanders' remarks came ahead of a global "Free the Vaccine" day of action Thursday wherein medical professionals, scientists, and progressive activists are planning to rally at Moderna headquarters in Massachusetts, PhRMA headquarters in Washington, D.C., Pfizer headquarters in New York City, and other locations to pressure Biden to support the proposed intellectual property waiver. A WTO council is meeting to discuss the proposal this week.

Without ambitious action to free vaccine recipes from the pharmaceutical industry's stranglehold, activists and experts have warned, most poor nations will not achieve sufficient inoculation against the deadly virus until as late as 2024 as rich countries continue to hoard much of the existing supply.

According to a new analysis by the International Rescue Committee, excess vaccine doses bought up by the U.S., United Kingdom, and European Union could inoculate every adult in Yemen, Ethiopia, and other nations facing horrific humanitarian crises.

"Around the world, two and a half million lives have already been lost due to this brutal disease and many countries are battling without adequate medical care and no vaccines," Gabriela Bucher, executive director of Oxfam International, said in a statement Wednesday. "By allowing a small group of pharmaceutical companies to decide who lives and who dies, rich nations are prolonging this unprecedented global health emergency and putting countless more lives on the line."

Subscribe to Common Dreams
Our Mission:
To inform. To inspire.
To ignite change for the common good.

Common Dreams has been providing breaking news & views for the progressive community since 1997. We are independent, non-profit, advertising-free and 100% reader supported. Our work is licensed under a Creative Commons Attribution-Share Alike 3.0 License. Feel free to republish and share widely.