‘Bolsonaro Doesn’t Know the Earth is Round’: How Lula Can Win Back Brazil 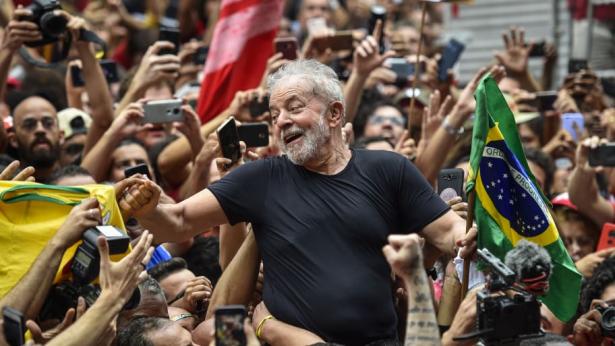 On Wednesday 10 March, Brazil’s former president Luiz Inácio Lula da Silva gave a rousing comeback speech at the metalworkers’ union headquarters in São Bernardo do Campo, an industrial centre in the São Paulo metropolitan region from where Lula first emerged as a national figure in the 1970s. The day before, in a shocking turnaround that surprised even those convinced of his innocence, a justice on the supreme court annulled the criminal convictions against Lula, rendering him eligible to run for a third term next year.

The ruling in Lula’s favour would have been a major story even if his popularity had faded since leaving office in 2011. But recent polls show that he remains strikingly electable, ahead of the far-right incumbent, Jair Bolsonaro, who won the 2018 election. Other polls suggest a closer race, which is still notable given that Lula has not even started campaigning. Lula also led in the polls three years ago but was barred from running by an infamous judge who went on to join the Bolsonaro administration. For his part, Bolsonaro, a retired army captain who served without distinction in congress for 27 years, has presided over an unmitigated catastrophe. If Latin America’s largest nation was once held up as a model for how to balance economic growth with dramatic poverty reduction, its current leadership seems perfectly content with being a global pariah (the foreign minister literally said as much last October).

From his handling of the environment and the pandemic, to cite a few prominent issues, Bolsonaro has shown himself immune to reason. This is why Lula seemed so intent on reasserting the primacy of facts in his nation’s political discourse during his speech last week. “It is always important to reiterate whenever you can,” he declared, “the planet is round … and Bolsonaro doesn’t know it.” He outlined all the steps he would have taken had he been in office when the pandemic struck, each measure more sensible than the last. Bolsonaro notably continues to downplay the virus even as international observers worry about Brazil becoming a hub for the dissemination of new variants.

Although it is unclear whether Lula will actually run again next year, the very fact that he can has shifted Brazil’s political terrain. Both the current speaker of the house, elected to his influential position with Bolsonaro’s support, and the previous one, a centre-right figure whose party has hinted it might endorse Bolsonaro in 2022, signalled an openness to Lula’s rehabilitation. This is a stunning reversal from only three years ago when Brazilian society found itself in the grip of a reactionary groundswell that held progressives responsible for every social ill, real or imagined. The recognition Lula has received from the left and right in recent days can be attributed to his ability to sell a conciliatory message, one rooted not in ideological confrontation but in a reclamation of the basic republican values that Bolsonaro nakedly disdains.

A glaring obstacle remains in the way should Lula pursue the presidency again: international market forces. As reported in Bloomberg, Lula’s renewed political eligibility “sent stocks and the currency cratering, deepening some of the worst performances this year”. Elsewhere, investors told Reuters that “the prospect of Bolsonaro running against Lula pits two ‘populist’ candidates against each other, hollowing out the center ground, which is more fertile for the economic reforms Brazil desperately needs”. Amid the handwringing of observers most attuned to the narrow wishes of private investors, it is worth recalling the obvious differences between the incumbent and the would-be challenger who unsuccessfully ran for president three times before finally breaking through in 2002.

Under Lula’s Workers’ party, the Brazilian federal government implemented a flurry of innovative federal policies that transformed the lives of millions of Brazilians. Poverty plummeted, while the number of college graduates soared. Bolsonaro, for his part, whines about his inability to get anything done, pining for the days of military rule. He demonstrates a flippant attitude toward the wellbeing of anyone who is not a blood relative. That he won the presidency in 2018 is a testament not to the appeal of his agenda but to the erosion of basic civility in Brazil. This is the comparison to keep in mind as headlines appear in the months to come – and surely they will – alerting investors to the purportedly worrisome economic agenda of Lula and his party, the same “frightful bunch” who once lifted 28 million people out of poverty.

There have been also been some grumbles from retired military figures about the impropriety of Lula being eligible to stand for office. To his great credit, however, vice-president Hamilton Mourão, a retired general, threw cold water on any talk of conspiracy, saying people have every right to vote for the former president. It remains highly unlikely that a tragic history of military intervention will repeat itself. Lula’s return to the scene has also thrown the centre-right into disarray. For example, João Doria, a former businessman who rode Bolsonaro’s coat tails to the São Paulo governor’s mansion in 2018, announced he may not pursue the presidency after all, recognising the danger of splitting the rightwing vote. Doria’s move is a tacit admission of the former president’s ability to appeal to the broad centre of Brazilian politics.

As in 2002, when Lula promised a plausible social democratic alternative to the deprivations of neoliberalism, his timing might again prove impeccable. There is a feedback loop in his favour – poll numbers indicate that Lula does best against Bolsonaro among opposition figures, thus strengthening his hand as leader of the opposition, and leading to higher poll numbers as other anti-Bolsonaro voters flock to his side. Sensing this momentum, even centre-right figures have noted Lula’s ability to build bridges, a dig at Bolsonaro’s inability to do so. Perhaps it is a sign that the establishment that once bet on Bolsonaro to keep Lula’s Workers’ party at bay in 2018 is coming, in fits and starts, to the conclusion that he is no longer worth bringing the country to the brink of collapse.