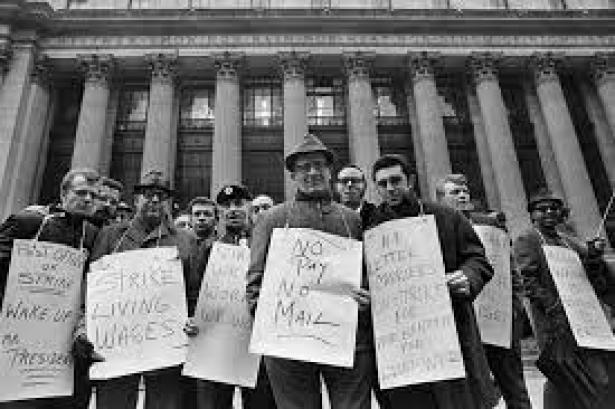 A wildcat strike by New York City postal workers quickly spread in 1970 bring mail service to a halt in much of the country.,

The day after St. Patrick’s Day in New York City was often little more than an intense, city-wide hangover.  But on March 18, 1970 residents of the Big Apple awoke to more than just a headache.  Thousands of local Postal workers were on the picket line in defiance of both Federal Law which prohibited strikes by government employees and their own union leadership.  Within days business in the commercial and financial center of the nation ground to a halt in those pre-electronic communications days and the strike spread to more than 30 cities with 200,000 off the job.  It was a big deal.  A very big deal.

But chances are unless you were one of the strikers or a member of their families, you have forgotten or never heard of one of the biggest—and ultimately most successful—labor battles of the Post-War era.  Maybe that’s because of all the other turmoil in the country that year.  With the Vietnam War dragging on, protests were growing bigger and attracting more than just students and hippies. Major cities were tinderboxes, exploding regularly in Black riots that seemed more and more like insurrections.  Even middleclass women—wives, mothers, and secretaries—were taking to the streets and shaking their fists.  Draconian drug laws fueled an underground economy, gang warfare that was more wide spread and pervasive than between rival bootleggers with Tommy guns, and ordinary street crime.

So the Postal workers had a beef?  Big deal, seemed the attitude in Washington.  Take a number and wait your turn. And the Posties did have a beef, a very big beef.

It hadn’t always been that way.  In the old days Post Office jobs at all levels had been political plumbs and handed out according to the rough justice of the spoils system.  Every time the Presidency flipped to a different party, there was a general house cleaning, and fresh armies of patronage workers.  Civil Service in the early 20th Century had ended that for all but local postmasters and other muckety-mucks.  During the Depression working for the Post Office meant not only unheard of job security, but came with an array of benefits—paid holidays and vacations, health insurance, and pensions—that industrial workers in the private sector could only win by wearing out shoe leather and risking busted heads on the picket line.  During the deep Post-World War II recession the Post Office offered preferential hiring to veterans, and many leaped at the chance for secure employment.  In fact the large cohort of former veterans in New York would provide the core leadership and rank-and-file muscle for the strike.

Despite the security and the benefits, Post Office pay had been drifting down in comparison to the civilian workforce throughout the boom years of the ‘50’s and ‘60’s.  Workers had not had a pay raise since 1967 and that raise had failed to keep up with inflation.  Entry level worker were now laboring at wages below the poverty line if they were supporting families, as most of them were.  In addition, conditions in crowded urban postal facilities were poor and dangerous.  Morale was low and anger growing.

The situation was even more frustrating because the law not only forbad strike action, it banned any kind of collective bargaining.  National unions of postal workers, mainly the American Postal Workers Union (APWU) representing clerks and mail handlers, and the National Association of Letter Carriers (NALC) could do little but lobby the administration and Congress for better pay and conditions.  The inherit weakness of such a position had made that leadership both timid and cautious.  But rank and file anger was festering, and becoming an issue.

In 1968 the Kappel Commission, established by Congress to review the current state of the Postal Service, had recommended that postal workers be given the same rights as private sector workers to collective bargaining. When recommendation was rejected by Congress, union leaders could not be stirred beyond issuing disappointed press releases. 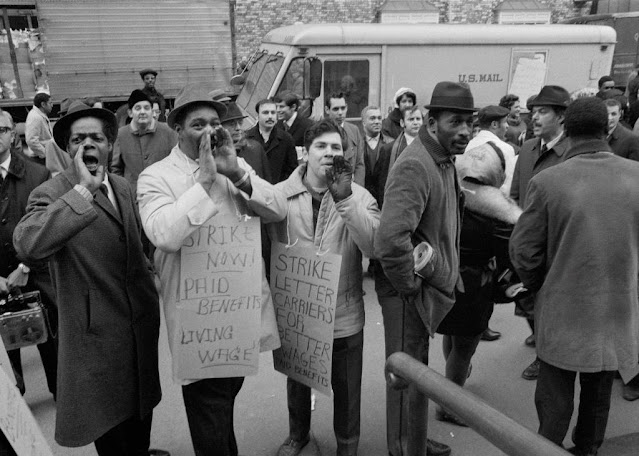 Black workers brought the spirit and disciplined non-violence of the Civil Rights Movement to the Postal Strike of 1970.

It was too much for the rank-and-file, especially in New York.  Not only did Postal Workers there have ties to the traditionally militant unions of the city and included many members with Socialist, Communist, and radical backgrounds, but a huge infusion of Black workers over the previous decade brought with them the spirit of the civil rights movement, familiarity with direct action and non-violent protest, and cultural and political connections to the Black empowerment movement.

Agitation for strike action began among rank-and-file militants after newly elected President Richard M. Nixon proposed only a flat 4.1% wage increase in his 1969 budget.  The proposal was angrily shouted down at New York union meetings and pleasure for a strike grew.  NALC President James Rademacher scurried to the White House with word that he might not be able to control his members. Rademacher and Nixon reached an agreement in December 1969 that tied a 1970 5.4% raise to the creation of an independent postal authority and collective bargaining.   When a Congressional committee finally moved on the agreement in early March local leaders at New York’s NALC local Branch 36 were hooted from the platform. 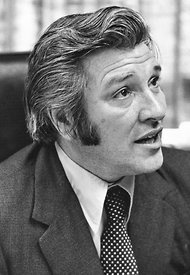 Rank-and-File leader Vincent Sombrotto and others demanded an immediate strike vote.  Union leaders refused calling such a vote illegal and against the union’s own constitution.  Over a series of acrimonious meetings union leadership was able to delay a vote until March 17 as the city was celebrating St. Patrick’s Day.  The strike was overwhelmingly approved and pickets went up after the stroke of midnight.

The next day emergency meeting called by the rank and file at other New York locals of both the NALC and APWU forced their own votes and joined the strike.  Over the next few days it would be repeated in city after city.  In Chicago more than 3000 members literally chased their leadership out of the hall and down the street.

Instinctively defiant, Nixon went on national TV to order employees back to work immediately, threatening mass dismissals if they did not.  He vowed that the government would never negotiate under duress.  The speech only aroused the ire and determination of the strikers and helped spread it even faster and further. 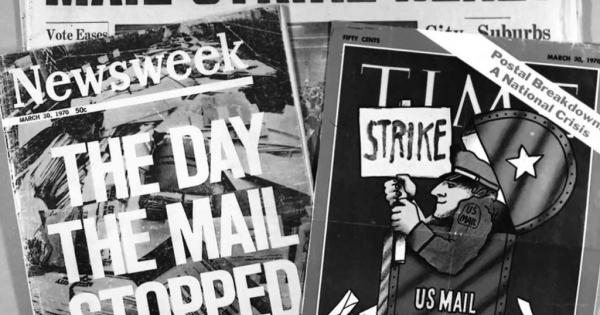 The national media, including the influential weekly news magazines helped whip up hysteria about the walk-out.

By the end of the week better than 200,000 were out in most urban population centers and the strike was even spreading to conservative small cities and towns.  Newspapers became semi-hysterical as business paralysis set in and the stock market plunged on low volume because trades could not be executed without mail orders and confirmations.   Scare stories of violence, all false, circulated.  Picket lines were noisy, but disciplined and models of non-violence.

After a week the administration went to court to seek an emergency injunction, which was quickly granted, against the strike and threatened individual strikers with jail for contempt of court if they did not comply.  That only backfired, not only steeling the resolve of the strikers, but bringing declarations from other Federal employees that they would join the strike if the injunction was enforce.

On March 23 a desperate Nixon again took to the airways.  He announced the proclamation of a National Emergency—just a step short of martial law—which authorized the use of Federal troops to move the mail.  He followed up the speech with Operation Graphic Hand which mobilize 24,000 members of the Regular Army, National Guard, Army Reserve, Air National Guard and Navy, Air Force, and Marine Corps Reserve of which 18,500 were deployed to 17 New York City Post Offices.  Tens of thousands of others were put on alert for possible deployment to other cities.

Workers were outraged and fearful that the introduction of troops would lead to the violent suppression of the strike in the tradition of the Pullman Strike in which the Army moved the mail at the point of bayonet and machine gun.  Strikers allowed the military to move into the Post Offices without opposition. 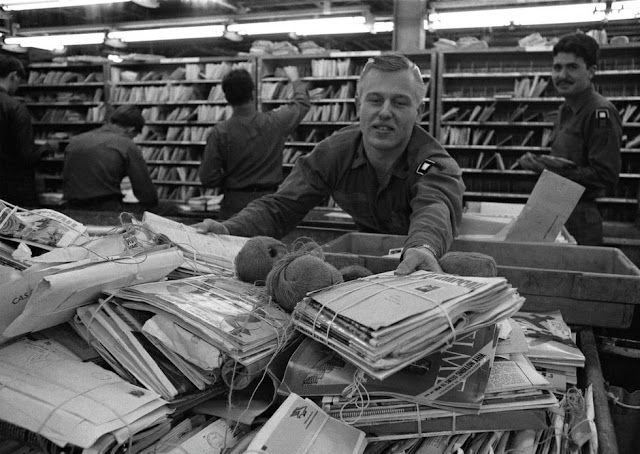 Federal troops brought in to move the mails were untrained and overwhelmed.  They could do little to unjam the system.

Once inside, however, the untrained troops had no idea what to do.  The mail was still snarled.

The desperate administration now entered secret negotiations with union leaders after vowing never to do so.   With no third TV appearance and as little fanfare as possible, Nixon capitulated to virtually all of the strikers’ demands on March 25.  He agreed to recommend an 8% wage increase and the right of collective bargaining, albeit without the right to strike.  Amnesty for the strikers was guaranteed.

Workers went peacefully back to work after an eventful, but peaceful 2 week strike. 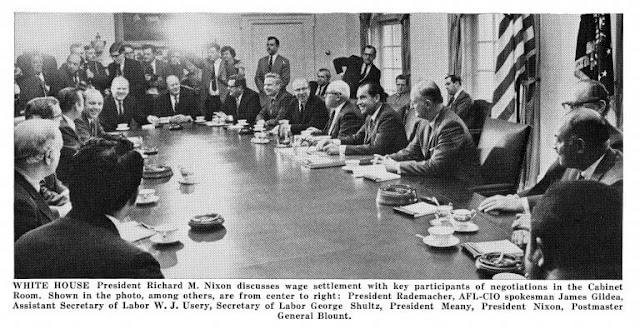 Richard Nixon, Post Master General Roy Blount and national union leaders in a photo op before trying to hammer out a wage agreement to end the strike.

Congress enacted the terms of the agreement in the budget and in the Postal Reorganization Act of 1970 which went into effect on July 1, 1971 and transformed the Post Office Department into the U.S. Postal Service, an independent establishment of the executive branch to be operated like a private corporation.  Rank-and-file militants rightly feared that this hybrid creation would come back to bite them in the ass and become a path to privatization.

To prepare themselves for collective bargaining that summer the NALC and four smaller postal unions merged with APWU.  The new union, retaining the American Postal Workers name, was, like its components, an affiliated member of the AFL-CIO and at the time of its creation, the largest union of postal workers in the world.

The logo of the APWU after postal unions merged under its banner.

Rank-and-File strike leader Vincent Sombrotto would go on to oust the old conservative leadership of the APWU in the mid-70’s and be elected as President on a militant ticket.

One last note.  Remember that declaration of National Emergency?  Guess what.  It has never been revoked and continues to give U.S. Presidents virtually unlimited power to seize property, organize the means of production, and institute martial law.  It was cited as the authority of some of the government’s most controversial domestic security actions after the 9/11 attacks and before the passage of the Patriot Act.  It remains an active tool at the disposal of this and any future President.