The Supreme Court heard an important case today challenging California's Agricultural Labor Relations Act, which allows union organizers to enter farms to talk to workers. The plaintiffs had a sympathetic Court but may have overreached their case. 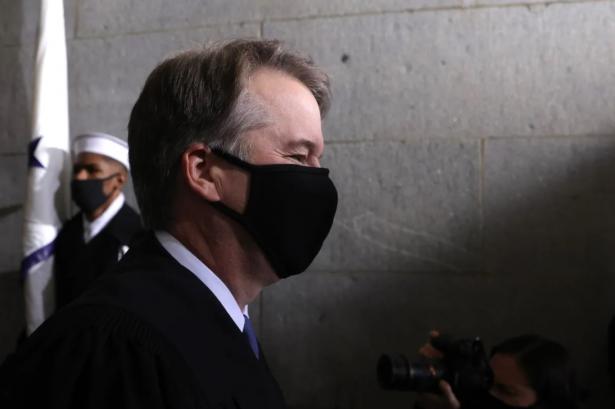 Justice Brett Kavanaugh arrives at the inauguration of US President-elect Joe Biden on the West Front of the US Capitol on January 20, 2021, in Washington, DC., Win McNamee/Getty Images

The first is that there are almost certainly five justices — and there may be as many as nine justices — who believe that the pro-union California regulation at issue in Cedar Point is unconstitutional. That regulation allows union organizers to enter onto farm worksites for a few hours a day, and for about a third of the year, in order to try to convince those workers to unionize.

The second thread is that several conservative members of the Court — Justice Brett Kavanaugh was particularly outspoken on this point — appeared taken aback by the radical arguments advanced by the plaintiffs in Cedar Point. In their briefs, those plaintiffs suggested that the Constitution gives them a broad right to “exclude unwanted persons from private property” — a right that, if taken to its logical extreme, could bar health inspectors from inspecting restaurants to make sure they are safe (the plaintiffs’ lawyer, Joshua Thompson, disavowed the strongest form of his argument almost immediately after he was asked about it).

The third thread is that it’s not entirely clear how much any of this matters. Cedar Point arises under the Fifth Amendment’s “Takings Clause,” which provides that private property shall not “be taken for public use, without just compensation.” Thus, if the plaintiffs prevail, they do not win a right to bar union organizers from their property, merely a right to be compensated.

Several conservative justices, including Chief Justice John Roberts, Justice Clarence Thomas, and Justice Amy Coney Barrett, asked just how much compensation the landowners should receive if they do win their case — and Barrett at one point suggested that the amount may be as little as $50.

So, while the Cedar Point plaintiffs asked the Court to revolutionize American property rights law, potentially giving landowners broad immunity from a wide range of laws, several members of the Court appeared taken aback by the implications of such a revolution. Cedar Point could very well end in bad news for farm workers’ unions in California. But it seems less likely to end in catastrophe for them — or for government regulation of land use generally.

The California regulation at issue in this case allows organizers to enter a worksite and speak to farmworkers for up to three nonconsecutive hours a day — the hour before the start of work, the hour after the end of work, and the workers’ lunch break. A union must notify both the government and the employer before it invokes this right, and it may only enter a particular worksite for up to 30 days at a time — though it may also invoke this right up to four times a year.

Thus, union organizers are allowed on a worksite for a maximum of 120 days a year, and only for a total of three hours per day.

As both Kavanaugh and Justice Sonia Sotomayor pointed out, there is a very strong argument that this regulation goes too far under the Supreme Court’s decision in NLRB v. Babcock & Wilcox Co. (1956). Babcock established that business owners may exclude union organizers from their property “if reasonable efforts by the union through other available channels of communication will enable it to reach the employees with its message.”

Thus, if farmworkers’ unions can reasonably approach farmworkers when they are not at work, California’s regulation may go too far and thus may violate the Takings Clause.

Rather than making this very straightforward argument, however, the Cedar Point plaintiffs, who are represented by an ideologically conservative litigation shop called the Pacific Legal Foundation, asked the Court to transform the law governing property rights.

Current law distinguishes between “per se takings,” which involve unusually severe intrusions on private property and are treated with particular skepticism by courts, and milder intrusions on property rights that are less likely to prevail in court. Very few cases qualify as per se takings. Under existing precedents, a law doesn’t count as a per se taking unless it deprives a property owner of “all economically beneficial or productive use” of their property, or subjects the property owner to a “permanent physical occupation” of their land.

The plaintiffs argued that the California regulation amounts to a per se taking because it gives unions a permanent right to enter onto private property, even if those unions cannot exercise this right all of the time.

There are many problems with this argument, one of which is that there are many laws requiring businesses to allow health and safety inspectors to inspect their operations. Another is that there are laws stretching back to the 1600s allowing private individuals to temporarily enter another person’s property.

When Thompson began his argument, Chief Justice Roberts quickly asked him whether Thompson’s proposed rule could engager health and safety inspections, and the lawyer conceded that government workers should be allowed to enter private land. The question was whether a different rule should apply to private individuals who are permitted onto a business’s property.

But even with this concession, Thompson’s argument wound up raising a slew of difficulties. How should a court determine the scope of an individuals’ property rights, and are these rights established by state law, by the original understanding of the Takings Clause, or by something else? Could the government hire a private company to perform health and safety inspections? And, most importantly, how does Thompson get around the Court’s decision in Babcock, which held that union organizers are allowed on private property — at least some of the time?

Ultimately, these difficult questions left Justice Kavanaugh exasperated, and he seemed to want to take the Cedar Point plaintiffs’ most radical arguments off the table.

“I’m a bit mystified by some of the arguments here,” Kavanaugh told Thompson. The Cedar Point plaintiffs, according to Kavanaugh, are “asking us to reinvent the wheel.” And there is no need to do so when the Court already “decided in 1956 how to balance union rights against property rights” when it handed down its Babcock decision.

That’s not necessarily good news for farmworkers’ unions or for the state of California as Kavanaugh also suggested that the state’s regulation violates Babcock. So, for that matter, did Sotomayor, who is probably the most liberal member of the Court.

But the fact that the conservative Kavanaugh appeared eager to shrink this case into a simple application of a 65-year-old legal precedent suggests that the Pacific Legal Foundation is unlikely to achieve the revolution it sought. Thompson came to the Supreme Court with a radical proposal, immediately started adding caveats to it when confronted with some of the potential implications of that proposal, and was eventually hit with questions from a “mystified” justice who didn’t understand why the Cedar Point plaintiffs didn’t simply accept the smaller victory they could have won under Babcock.

As the Supreme Court moves right, conservative lawyers are likely to lose quite a few cases because they overreach

The Cedar Point plaintiffs could still win their case — Kavanaugh, in particular, seemed ready to hand them a victory under Babcock. Though, if that happens, there would still need to be another round of litigation to determine how much money is at stake in the case. And, if Barrett’s suggestion that the farm owners may only be entitled to something like $50 ultimately prevails, the Cedar Point plaintiffs’ victory could prove quite hollow.

This may seem like a surprising outcome, as six of the Supreme Court’s nine seats are now held by Republican appointees, and the Court is probably more conservative now than it has been since the 1930s. But, as I wrote last July after the Court wrapped up a surprisingly liberal term, liberals can expect to win many cases in a conservative Court because conservative lawyers will tend to bring more aggressive claims as the Court moves rightward:

As Brendan Nyhan, a professor of government at Dartmouth College, wrote in 2015 — the last time the Court had a surprisingly liberal term — “the court’s recent decisions may reflect a change in the cases being considered by the court rather than a shift in the preferences of the justices.”

It remains to be seen what the Court actually decides in Cedar Point. Some members of the Court’s right flank, especially Justice Neil Gorsuch, appeared sympathetic to the Cedar Point plaintiffs’ most radical arguments. Perhaps Gorsuch will convince four of his colleagues to go along with him.

After Monday’s argument, however, it appears more likely that something similar to Kavanaugh’s view will prevail and that the Pacific Legal Foundation’s revolution will, at the very least, have to wait. If that happens, it will likely be because conservative lawyers asked for too much, even from this Supreme Court.