The Boundless Advantages of the Welfare State—for the Rich

Robbing the rest of us blind, wealthy Americans benefit from a wide array of tax breaks and government subsidies that are hidden behind the constant Republican blather about entitlements for the poor. 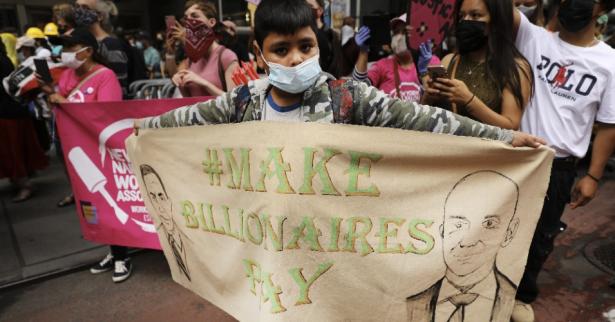 People participate in a "March on Billionaires" event on July 17, 2020 in New York City. The march, which included a diverse group of activists, politicians and citizens, called on New York Governor Andrew Cuomo to pass a tax on billionaires and to fund w, Spencer Platt/Getty Images

President Biden's $1.9 trillion Covid relief plan is a positive step forward in the battle for economic and social justice. But not a single Congressional Republican voted for it. The unsubstantiated claim of Republican senators and conservative groups is that it establishes a "welfare state" that discourages work. Opponents have called it "excessive and unnecessary," a "partisan monstrosity." Sen. Ted Cruz (R-Texas) even accused the Democrats of trying to 'cancel' poverty, which, he inexplicably explains, "has been a part of American life since this country was founded."

The stimulus program will cost about $2 trillion. The pandemic stock gains, the great majority of which went to the richest 10% of Americans, amounted to $9 trillion.

In addition to their passively acquired stock market bonanza, wealthy Americans benefit from a wide array of tax breaks and government subsidies that are hidden behind the constant Republican blather about entitlements for the poor.

Those enormous stock market gains, some $30 trillion since the end of 2008, can be held tax-free until the stocks are sold. But in a blatant example of a system rigged for the wealthy, the tax code includes a so-called stepped-up provision which allows the super-rich to leave much of their multi-trillion-dollar stock market fortunes to their children with all the accumulated gains magically erased, and thus, in many instances, without a single dollar in taxes coming due. This massive subsidy for the super-rich, along with gift tax and estate tax loopholes, has allowed families like the Waltons to avoid paying their debt to society.

The stock market has quintupled in value since the mid-1990s, the era of the tech explosion, when so many baby boomers were truly beginning to get rich. That's trillions of dollars of potential tax revenue needed for infrastructure and other vital needs of society. But if daddy and mommy's stock has grown from $10 to $100 over the years, the kids won't pay any taxes on that $90 gain, and society's potential revenue is wiped out. As baby boomers age and pass away, more and more privileged children will become accidental millionaires.

All this in a nation whose conservatives pride themselves in talking about "self-made" millionaires who "made it on their own."

Tax expenditures include mortgage deductions, interest and dividend exclusions, and reduced rates on capital gains. According to the Center on Budget and Policy Priorities, "the cost of all federal income tax expenditures was higher than Social Security, the combined cost of Medicare and Medicaid, or the cost of either defense or non-defense discretionary spending....These tax expenditures are 'upside-down,' providing their largest subsidies to high-income people even though these individuals are least likely to need financial incentives to engage in the activities that tax expenditures are generally designed to promote, such as buying a home, sending a child to college, or saving for retirement."

Furthermore, wealthy people are living longer, so they're getting much more of the late-life benefits. A Brookings report estimates that lowest-quintile Americans born in 1960 will receive "only 78 percent of the lifetime Medicare benefits received by the top income quintile." The Congressional Research Service agrees. The American Medical Association agrees. The National Institutes of Health agrees.

The most outrageous giveaway to the rich may be the mortgage interest deduction, which is, as described by Matthew Desmond, "an enormous benefit that has also become politically untouchable." A 2017 Guardian story confirmed: "The US government spends more than twice as much subsidizing the tax break for affluent homeowners, who would most likely be able to afford their homes anyway, as it does on helping the poorest families pay rent and avoid homelessness...the city of Los Angeles had declined to even accept new [Section 8] applications for a voucher for a staggering 13 years."

Then, piling on, those with expensive homes can take a tax break of up to a half-million dollars when they sell their homes. Relatively few tax breaks go to low-income Americans. The total of mortgage and property tax subsidies is nearly double the amount spent on public housing programs.

On top of everything else, the wealthiest among us can take a mortgage interest deduction for a second home, which might even be a... yacht.

Corporations and their investors have been profiting for years from patents on life-saving medications. A recent example of corporate disdain is the U.S. Chamber of Commerce's opposition to an attempt to waive intellectual property rights for the production of generic Covid-19 vaccines for poor nations. Despite massive public funding for those vaccines, the rights are controlled by profit-hungry Big Pharma.

In his comprehensive summary of America's decades-long capitulation to the rich, Dean Baker reflects on some of the abuses. At the time of his writing the hepatitis-C drug Sovaldi had a U.S. list price of $84,000 for a three-month course of treatment, while in India high-quality generic versions were available for $300 to $500. When Gilead Sciences, the manufacturer of Sovaldi, recently developed an anti-Covid drug for about $12 per treatment, they set the price at $3,200. The breakthrough drugs for cancer and other diseases, which now sell for tens or hundreds of thousands of dollars annually, would instead sell for a few hundred dollars. Numerous examples of price-gouging have occurred in recent years.

The justification for granting these monopoly protections is that the increased innovation and creative work that is produced as a result of these incentives exceeds the economic costs from patent and copyright monopolies. However, according to Baker, there is remarkably little evidence to support this assumption.

When Dr. Jonas Salk was asked about a patent on his polio vaccine in 1955, he said, "There is no patent. Could you patent the sun?"

Patenting the sun. Some of today's super-rich would love to add that subsidy to their welfare state.

Paul Buchheit is an advocate for social and economic justice, and the author of numerous papers on economic inequality and cognitive science. He was recently named one of 300 Living Peace and Justice Leaders and Models. He is the author of "American Wars: Illusions and Realities" (2008) and "Disposable Americans: Extreme Capitalism and the Case for a Guaranteed Income" (2017). Contact email: paul (at) youdeservefacts.org.