Stacey Abrams on Republican Voter Suppression: 'They Are Doing What the Insurrectionists Sought'

The ‘coordinated onslaught’ of bills touts the big lie of voter fraud that fueled the January 6 insurrection, says the former Georgia candidate for governor

March 24, 2021 An Interview by Sam Levine The Guardian
Printer friendly
Stacey Abrams on Republican Voter Suppression: 'They Are Doing What the Insurrectionists Sought' Published March 24, 2021 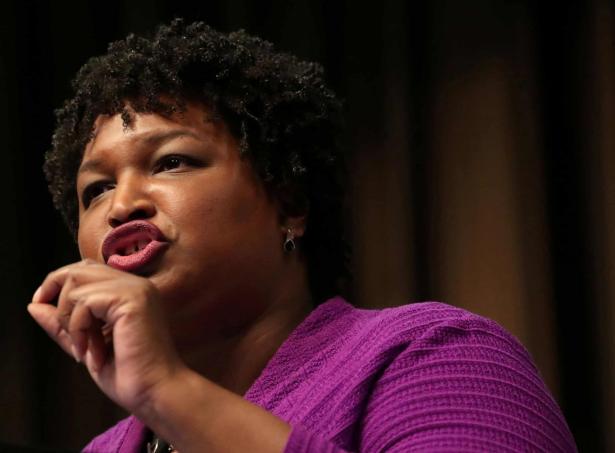 Stacey Abrams: ‘It is a dangerous thing for the business community to be silent’ on voter suppression., Photograph: Shannon Stapleton/Reuters

There may be no politician better suited for a moment when democracy is under attack than Stacey Abrams. A decade ago, when few saw any chance of Georgia becoming a Democratic state, Abrams pushed to invest in turning out Black, Latino and Asian American voters, who had long been overlooked by politicians campaigning in the state.

And when she ran for governor in 2018, Abrams made voter suppression a centerpiece of her campaign, underscoring the way that America fails to live up to the promise of its democracy by denying the right to vote to so many eligible citizens.

Now many of the issues Abrams has been raising for years have exploded and are at the center of American politics. The Guardian spoke to Abrams, who is widely expected to run again for governor next year, about this uniquely dangerous moment in American democracy.

How is what we’re seeing now similar to and different from what we’ve seen in the past?

The coordinated onslaught of voter suppression bills is not the norm.

What’s happened over the last 15 years has been a steady build where we’ve seen bills passing in multiple state legislatures over time. It was absolutely voter suppression, but it was this slow boil. It’s that terrible analogy of the frog in the water as the water starts to boil. Unless this is what you do and unless this is what you pay attention to, folks like me were watching, but it was fairly invisible to the untrained eye that voter suppression was sweeping across the country, especially beyond the boundaries of the south.

What is so notable about this moment, and so disconcerting, is that they are not hiding. There is no attempt to pretend that the intention is not to restrict votes. The language is different. They use the veil, they used the farce of voter fraud to justify their actions. Their new term of art is election integrity. But it is a laughable word or phrase to use. It is designed based on anything but a question of integrity. The truth of the matter is there is no voter fraud. The truth of the matter is we had the most secure election that we’ve had.

In your view, how linked is this to race? Would we be seeing these kinds of restrictions if there wasn’t that kind of explosion of turnout among Black voters that we saw in the election?

Well, I would say it’s inexorably linked to race, but I want to be really clear. Black voters are of course at the center of the target, but what is happening in Arizona, what is happening in Florida is also attacking Latino voters. They are attacking the energy and enthusiasm of Native American voters. They are attacking Asian American voters. While Black voters are of course at the center because of the historical animus that seems to exist towards our participation in elections, this is also about attacking other communities of color. And we are seeing it being done with an assiduousness and an attention to detail that is, as we said before, unparalleled, except for when you look at the actions of Jim Crow.

What we are seeing are also bills that are designed to thwart young people taking possession of the power that comes with their generational might. They are the largest cohort. And they showed signs of leveraging that in the 2020 election. And now we are seeing a reaction to that, a response, that is lumping them in with every other undesirable voter class, which primarily is driven by race, by age and by income.

What would the implications for our democracy be if these measures pass and are enacted and upheld by the courts?

It would be the exact intention of voter suppression. Which is that we shut duly eligible citizens out of participation in setting the course of the country.

We will not have effective responses to challenges that disproportionately harm communities of color. We will not tackle the existential crises that we face as a nation, as a world. We will not hear conversations in the legislative body about racial injustice, about climate action, about bodily autonomy.

When you can cordon off and extricate entire communities from participation, their voices are not only silenced, the policies that have allowed their participation in just our larger civic life are also chilled.

The larger ethos is this. There are those who say, ‘Well, OK these communities get harmed, it’s a dismal reality, they will not be moved by that.’ But as I keep repeating, when you break democracy, you break it for everyone. Because while they may start with communities of color and young people and poor people, there are intersections in terms of policymaking that affect those who want to be benefited by these processes. And benefited by these policies. They’re not going to stop with simply poor Latino voters. They’re also going to attack wealthy Latino voters who may need to vote in a different way because of the way they make their money.

You were quoted the other day about the need for businesses to come in and play a larger role in taking a stand against some of these measures in Georgia and elsewhere. Have you been disappointed to see the muted stances companies have taken?

As someone who served in the legislature, I am very aware of the delayed engagement that tends to happen with the business community. And so I’m not surprised by the current reticence to be involved. But I am challenging the intention to remain quiet.

We are obliged at this moment to call for all voices to be lifted up. And for the alarm to ring not only through the communities that are threatened directly, but by those businesses that rely on the durability of our democracy.

And so for the business community, it is a danger to their bottom line, to see a disconnection develop and be embedded in state laws that essentially say to rising populations that ‘you are not wanted and therefore we are not going to countenance your participation’. Because if you tell someone they aren’t wanted they’re going to assume you can’t say anything else to them.

It is a dangerous thing for the business community to be silent.

We have a conservative supreme court, we’re about to undergo another round of redistricting where Republicans have a clear advantage in the states again, a green light to use partisan gerrymandering. The filibuster in the Senate. I think a lot of people look at that and it’s so hard for them to have hope that any of this is going to get fixed – or that there is a path to fixing it. I’m curious what you see when you look at those institutions and how people should think about them as obstacles to achieving full democracy?

I’d begin with the most efficient tool. And that is the filibuster.

There is a credible argument to be made that the exceptions that have already been accepted for the filibuster should apply to protecting democracy.

Every other mechanism will take time. Every other mechanism will require the inevitability of demographic change. This is one piece that will ensure that rather than 100 years of Jim Crow, which is what we had to survive last time Congress abdicated its responsibility with regard to election law, that rather than 100 years of stasis and paralysis and ignominy, that this is an opportunity for us to get it right.

This interview has been condensed and edited