"We have the means to avert this failure but it's shocking how little has been done to avert it." 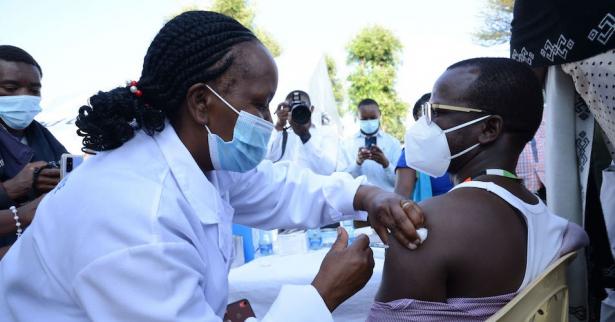 A healthcare worker administers an Oxford/AstraZeneca Covid-19 vaccine to her colleague at Mutuini Hospital in Nairobi. Kenya on March 3, 2021 received its first batch of 1.02 million doses of Oxford/AstraZeneca through global COVAX scheme as part of the , (Photo: Dennis Sigwe/SOPA Images/LightRocket via Getty Images)

As rich nations like the United States and pharmaceutical companies face sustained calls to share Covid-19 vaccine knowledge, the head of the World Health Organization on Monday decried the "grotesque" global inequality of vaccine distribution.

"In January, I said that the world was on the brink of a catastrophic moral failure unless urgent steps were taken to ensure equitable distribution of vaccines," WHO Director-General Tedros Adhanom Ghebreyesus said at a press conference.

"We have the means to avert this failure," he said, "but it's shocking how little has been done to avert it."

The gap in vaccine distribution, said Tedros, ultimately hurts all nations' effort to defeat the virus.

"The inequitable distribution of vaccines is not just a moral outrage," said Tedros, "it's also economically and epidemiologically self-defeating."

"As long as the virus continues to circulate anywhere, people will continue to die, trade and travel will continue to be disrupted, and the economic recovery will be further delayed," the WHO chief said.

An analysis from Agence France-Presse puts the inequality in stark terms:

Just 0.1 percent have been administered in the 29 lowest-income countries, home to nine percent of the global population.

"The toll in Africa," the New York Times reported Tuesday, "could be especially profound." Though it has 17% of the global population, the continent "has administered roughly 2 percent of the vaccine doses given globally."

Putting focus on Kenya, one of the countries relying on the WHO-backed vaccine distribution scheme known as COVAX, the Times said that cases there are "soaring," and gave a sobering projection:

Even under the best of circumstances, the country is expecting to inoculate only 30 percent of its people, or about 16 million out of almost 50 million, by the middle of 2023. When the rest of the population will get their shots is anybody's guess.

Tedros, in his remarks Monday, pointed to AstraZeneca and said it's "the only company that has committed to not profiting from its Covid-19 vaccine during the pandemic” and praised it for having licensed vaccine technology to other companies. While concerns have been raised about AstraZeneca's vaccine causing blood-clotting in some people, the WHO said it has been shown to be safe and approved its use.

Some public health experts, including Tedros, and progressive groups like the People's Vaccine Alliance have been calling for a suspension in the World Trade Organization's intellectual property rules to allow other companies to produce the vaccine and thus widen the scope and scale of doses.

But, as the Times reported Monday, "Governments have resisted."

By partnering with drug companies, Western leaders bought their way to the front of the line. But they also ignored years of warnings—and explicit calls from the World Health Organization—to include contract language that would have guaranteed doses for poor countries or encouraged companies to share their knowledge and the patents they control.

"It was like a run on toilet paper. Everybody was like, 'Get out of my way. I'm gonna get that last package of Charmin,'" said Gregg Gonsalves, a Yale epidemiologist. "We just ran for the doses."

A proposal from South Africa and India and backed by scores of other nations urges a waiver in the WTO rule, but richer nations, including the U.S and U.K., blocked a measure to do exactly that earlier this month.

According to BBC News, citing a leaked copy of the negotiating text of a WHO resolution, "wealthy nations... are pushing back on provisions in international law" to help poorer nations produce more vaccines. From the news outlet:

The WHO does not have the authority to sidestep patents—but it is trying to bring countries together to find a way to bolster vaccine supplies.

The discussions include using provisions in international law to get around patents and helping countries to have the technical ability to make them.

But the drug industry argues that eroding patents would hinder its ability to invest in future treatments for Covid and other illnesses.

Earlier this month, representatives of the U.S. drug industry wrote to U.S. President Joe Biden to share their concerns.

But that sharing of vaccine knowledge is a crucial competent of ending vaccine inequality and thus the global pandemic, according to a call released last week backed by over 1000 scientists and public health experts.

"We must use vaccines this year to control the pandemic around the entire world, not just in a few high-income countries," they wrote.

"In a world where there are enormous inequalities," they wrote, "Covid vaccinations offer us the opportunity to provide everyone globally, regardless of income, race, or nationality, immunological equity to be protected from SARS-CoV-2."

"The covid-19 pandemic will not be over for us until it is over for everyone," the group tweeted.

"We can end the Covid-19 pandemic this year," the group said. "But pharma giants are standing in the way."