labor Unions on Campus: How Some Undergraduates Are Organizing During COVID-19

Students on multiple campuses are getting involved in undergraduate unions. 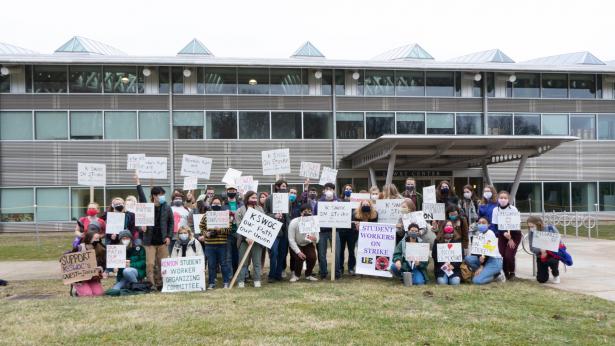 In the final days of her 2020 summer break, rising junior Melissa Francois headed to Martha’s Vineyard for a vacation before her scheduled return as a resident assistant (RA) at UMass Amherst. An out-of-state student from New York, Francois brought along her belongings so she could head directly to school after vacation. When UMass switched to remote learning in the spring, she had been fortunate to keep her job; but on her last day in Martha’s Vineyard, she received an email that said she would no longer be needed as an RA and should not return to campus.

The loss of employment for RAs was widespread. Though students had lobbied for a greatly scaled-back reopening plan, UMass announced changes at the last minute, and decided to “withdraw its offer of employment” for 450 — or 95% — of its RAs and peer mentors. Students claimed the university had fired them and broke its contract with RAPMU, an almost two-decade-old undergraduate-only union for UMass’s resident advisors and peer mentors, leaving students reeling.

For many, the implications were dire. According to U.S. News, tuition at colleges, private and public, has jumped over 140% in the past two decades. Former RAPMU co-chair Alice Troop tells Teen Vogue that many students rely on these jobs for basic expenses and access to stable housing.

After the pandemic started, Francois became an active member in RAPMU for the first time. She explains to Teen Vogue that she wanted to participate in the union’s impact bargaining sessions, and she was not alone. “I think that was something that a lot of people wanted to be part of because we initially weren't guaranteed our employment,” Francois says. “A lot of people were very interested in whether we would be able to keep our positions and our pay even though we were going to be working remotely.”

Renewed interest among members and a change in leadership marked a key shift that transformed RAPMU into what its members now call a “fighting union.” Former co-chair James Cordero defines a fighting union as one that “isn't thinking of itself as a bureaucratic, legalistic institution. It's thinking of itself as a place where workers meet with each other, talk about the change they want, and take collective action to win that change.”

With this fresh mindset, the union entered into two bargaining sessions, one for the fall 2020 semester and the other for spring 2021. Leading into fall, the union protested the university’s reopening plan, arguing in a July Medium post that it “completely ignores the safety of students, workers, and community members,” and threatened to strike if the university didn’t reorganize the plan.

RAPMU says its activism helped transform the reopening plan and that the group has won more masks for its staff and free on-campus COVID-19 testing. But the job losses came as an unexpected consequence of the safer reopening plan. RAPMU won the same protections in spring bargaining, plus an agreement from the university to make remote work available to RAs as well as housing and payment options in case of another campus closure, according to union representatives. The group says it also reached a settlement with the university over its earlier contract and will receive about half the wages the dismissed RAs lost in the fall.

Mary Dettloff, deputy director in the Office of News and Media Relations at UMass Amherst, tells Teen Vogue, “RAPMU and the university negotiated an agreement for the spring semester that included remote work being available for resident assistants and peer mentors if they had medical concerns regarding COVID, an opt-out stipend and campus housing if they need it, additional dining dollars, and free face masks.”

The story of RAPMU is a microcosm of a larger movement happening on several college campuses. While the community of active undergraduate-only unions is quite small, consisting of RAPMU, the Union of Grinnell Student Dining Workers (UGSDW), and the newly formed but yet to be recognized Kenyon Student Worker Organizing Committee (K-SWOC), the impact on their campuses has been significant. All three have organized around direct action and common themes like lack of transparency, job security, low wages, and what they believe has been inadequate COVID safety. Students say this organizing was fueled by the profound challenges they’ve experienced during the pandemic. 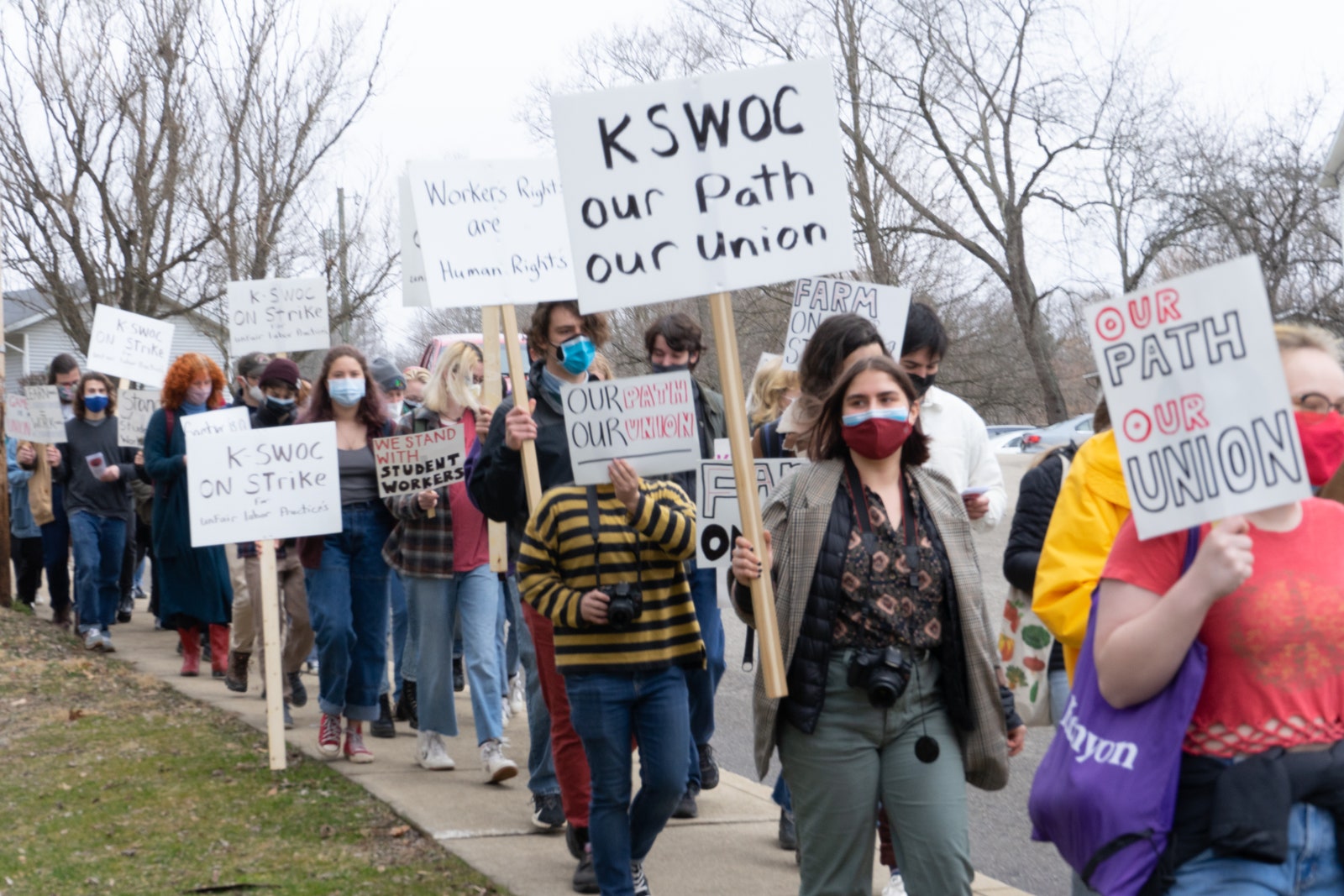 On March 16, K-SWOC organized a strike and picket outside the campus library.  JOHN ORTIZ VARGAS

UGSDW won paid COVID sick leave for dining workers, which it hopes to expand to a general sick leave policy in the future. The college promised to implement COVID-specific sick leave despite the impasse in negotiations over increasing student wages, a sticking point for the union. UGSDW co-president Ryland Rich explains to Teen Vogue that they are currently training first-year dining workers to negotiate and support their bargaining team.

Speaking to the first years, Rich noticed a change in attitude toward the administration. “In other years, it takes students a year and a half or two years to realize that the college doesn't really have their back and isn't that supportive,” she says. “I've seen this year's first years be way more aware of that because of the way the college continues to change their messaging around COVID.”

Alasia Destine-DeFreece, a senior at Kenyon and a member of K-SWOC’s steering committee, says that before the pandemic, busy students swept work issues under the rug, “but now there are bigger issues that cannot be ignored.”

In a statement to Teen Vogue, a Kenyon spokesperson says the school “understands the importance of supporting our students’ financial needs.” Throughout the pandemic, the statement continues, Kenyon has “extended a 10% tuition credit to all students, added a $2,000 personal allowance to need-based financial aid packages to offset the indirect costs of studying remotely, converted work-study awards to need-based grants during students’ remote semester, and provided supplemental aid and emergency funds to those facing financial hardship.”

(Teen Vogue has also reached out to Grinnell for comment.)

Initial conversations about starting a union at Kenyon began last April, with the group going public in August. The goal was to become the first all-inclusive undergraduate union in the country by joining United Electrical, Radio, and Machine Workers of America (UE), a rare instance of an established union agreeing to organize undergraduates. K-SWOC students also received guidance and endorsements from RAPMU and UGSDW. In December, Kenyon’s Board of Trustees rejected their request. In an email explaining the decision, college president Sean Decatur wrote, “While unions can serve important roles in some workplaces in some industries, that model does not fit our undergraduate academic setting, where the education of students is paramount.”

In addition to its fight for recognition, K-SWOC is focused on the urgent issues facing student workers. In mid-July, the group helped community advisors (CAs) organize after they expressed concern over what they felt was inadequate compensation and a lack of clarity on their role during the pandemic. After K-SWOC trained CAs to negotiate with the administration, they won a pay increase and a $1,000 reduction in the cost of room and board.

As a CA, Destine-DeFreece was involved in these negotiations, and notes that the win inspired CAs to build solidarity among student workers. “A lot of CAs realized the power of collective action," she says, "and, using that as a springboard, were more willing to work with K-SWOC in the future because they had already gained a benefit from what organizing work can be.”

On March 16, K-SWOC organized a strike and picket outside the campus library. Student workers in library and information services, lifeguards, and the campus greenhouse and farm were among the most represented. According to a press statement, K-SWOC says the purpose of the strike is “voicing frustration with the current system of student labor at Kenyon as a whole.” The students claim this is the first known undergraduate student labor strike in U.S. history. 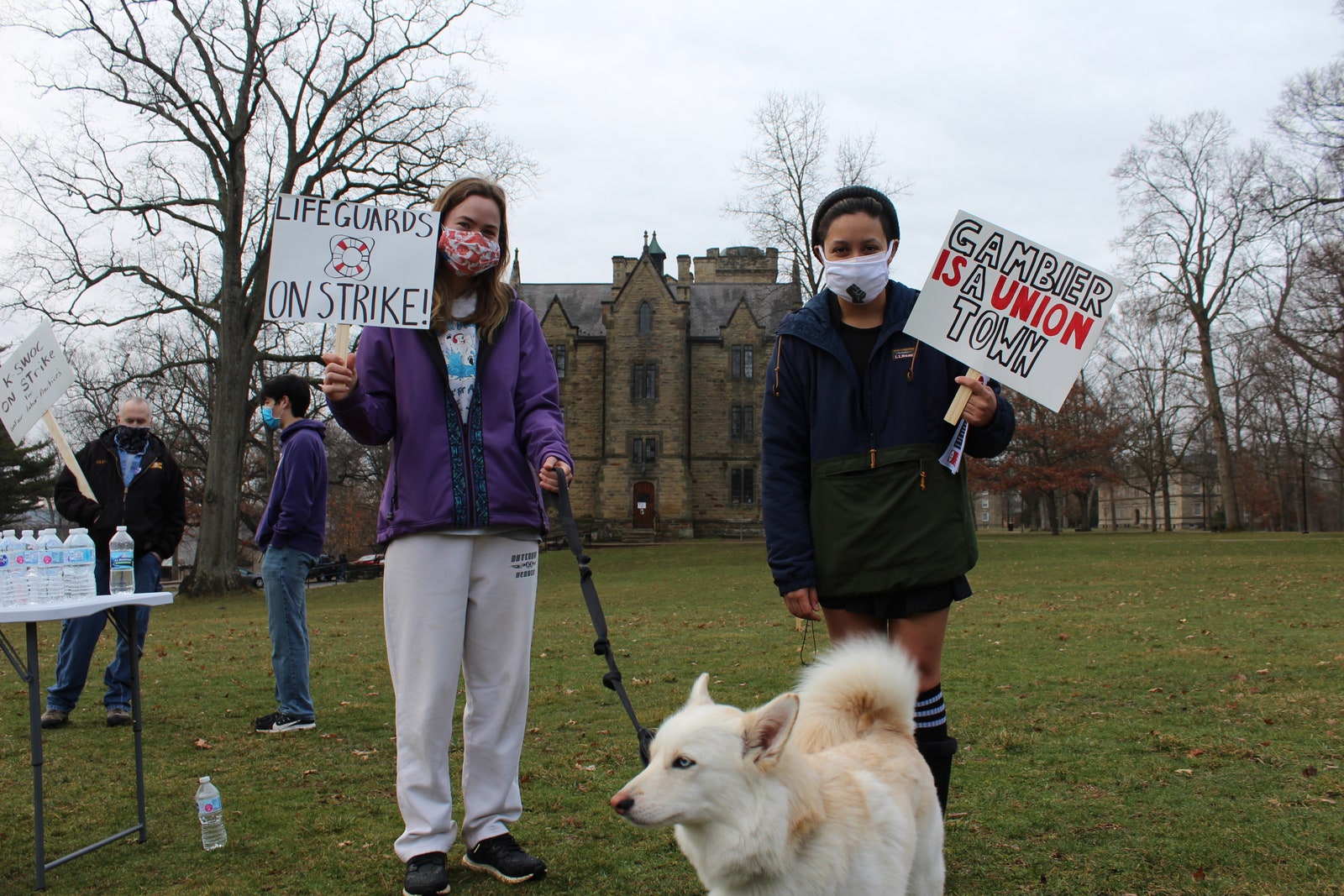 Both RAPMU and UGSDW say they regularly receive messages from undergraduate students looking to start a union, but it remains profoundly difficult to do so. The coalition Undergraduate Workers Union (UWU) is tackling the issue at a macro level, hosting conventions and providing resources, like advising, for undergraduate labor organizers. Naria Sealy, an organizer with UAW 2322 who also works with UWU, pointed out that undergraduate labor organizers often get caught in a vicious cycle. Established unions discount them as ineffective organizers, which students internalize, and this discourages them from trying to make change.

Sealy believes the way out of this cycle is for undergrads to use the power of their campus community to drive their organizing. “The camaraderie there really makes people want to do the work for other people,” she says. “If you inspire people to care about themselves, they're definitely going to be willing to overcome any sort of barrier once they realize that my job is connected to your job.”

These empowering connections have been formed across campuses during the pandemic. Since its creation, K-SWOC has held text banks, social media campaigns, and encouraged alumni to boycott donations until K-SWOC is recognized. The group has called out the college's tiered-wage system, which it argues is arbitrary and fails to provide students with a livable wage. Members recently held an informational picket to draw attention to their claim that student workers weren’t being paid during recent “quiet periods,” despite being paid last spring. The genesis of these actions are K-SWOC meetings, which bring together student employees across union shops to share their stories.

“I think a lot of the people who are involved in K-SWOC are people who have maybe felt out of place for a while, like myself,” K-SWOC member Rebecca Kornman tells Teen Vogue. “It's really meaningful to have a space where you can say, ‘We both need to work to be here.’ This isn't me being bratty and asking for more money. This is me saying, ‘The amount that you pay me, Kenyon, it's not enough.’”

“During quiet periods, students who work are paid. However, if remote projects are not feasible during quiet periods (such as for lifeguards), supervisors work with students to schedule additional hours when the quiet period ends,” says Kenyon's statement to Teen Vogue. “This is different than the approach the college took in the spring 2020 semester, when campus was shut down and students were sent home due to a statewide stay-at-home order. Because there was little time to prepare remote projects and no opportunity for students to make up hours, Kenyon paid students their expected earnings for the balance of the semester.”

UGSDW’s attempt to expand to include all undergrads was unsuccessful after Grinnell sought a ruling from the National Labor Relations Board. Still, the independent union has been working with students across workplaces. After many lost their jobs during the switch to remote learning, the union launched the “Lost Jobs Campaign,” its broadest campaign to date. Through digital actions, UGSDW pushed for more work study grants and remote employment opportunities for laid off students. Now, in addition to its own bargaining, the union is focused on addressing the needs of specific jobs like mailroom workers, some of whom claim their supervisors aren’t taking adequate COVID-safety precautions even after university intervention, and workers at the Student Publications Office who say they aren’t receiving payment in a timely manner.