tv Superstore Was the Best Sitcom of Its Era, A Wildly Funny and Poignant Capitalist Tragedy

The fantastic comedy, now streaming in full on Hulu, never lost sight of how corporate America makes life hell for the people who work within it. 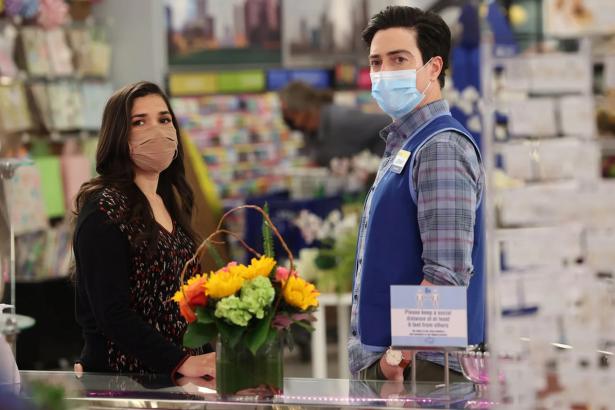 Jonah and Amy reconnect in the second-to-last episode of Superstore. , Jordin Althaus/NBC

“Sometimes, it’s nice to be nice,” my wife said as the final episode of NBC’s Superstore wrapped up. And that might be the most succinct way to characterize the daring but understated comedy, which never got the acclaim it deserved over its six seasons (though I surely tried to do my part).

The series’ sadly truncated final season (which was reduced from a 20-episode to a 15-episode order) felt a touch rushed here and there as it worked to pull disparate story threads together and end the show. But its last arc — in which Cloud 9, the titular superstore, goes out of business as its parent company shifts toward online shopping during a Covid-19-related downturn in bricks-and-mortar sales — revealed the show at its most trenchant and most poignant.

I’ll start with the poignancy. Like a lot of the most acclaimed sitcoms of the last decade, Superstore featured characters who fundamentally liked each other on some level, who worked together to try to make their bland and boring workplace a more exciting place to be.

Our main guides through this world were Amy (America Ferrera), a young woman who had never intended to end up working at Cloud 9 for as long as she had, and Jonah (Ben Feldman), who took a job there in the series’ pilot, intending to leave as soon as possible. Naturally, Jonah stuck around, but not just because he fell in love with Amy. (Will-they/won’t-they romances may be played out, but the Jonah/Amy connection was maybe the best of the 2010s.) He also became deeply invested in the lives and trials of his coworkers, like the mercurial Garrett (Colton Dunn) and the sarcastic and moody Mateo (Nico Santos).

But unlike plenty of other shows, Superstore never allowed poignancy to overwhelm the show’s darker, knottier aspects. Even the series finale — an incredibly sweet sendoff to Superstore’s characters that reaffirms their basic affection for each other — takes place on Cloud 9’s final day of business. The series was always dedicated to tweaking the ways in which corporate America makes life hell for the people who work within it.

At one moment in the penultimate episode, Jonah, pressed upon to give a rousing speech, says that he doesn’t know if anything can be done to save the store. Cloud 9’s parent company, Zephra, has taken and taken and taken from the Cloud 9 team, and now it’s going to take everything. It doesn’t matter how much the store’s workers like or support each other if the company that issues their paychecks fundamentally doesn’t care.

That balance between interpersonal affection and corporate indifference underscored Superstore’s entire ethos and its best storylines. What did it matter if Jonah and Amy fell in love if she moved up into management and he started organizing the store’s workers in an effort to unionize? How was Mateo going to remain a beloved friend and supporting character if his undocumented status meant he was under perpetual fear of deportation (a fear the show made terrifyingly real in a memorable story arc)? How were Cloud 9’s workers supposed to feel supported when the pandemic led to even more corporate cost-cutting measures?

Too many series as poignant as Superstore lean so far into their poignancy that they tilt over into outright treacle — saccharine and self-satisfied dives into uber-happy silliness. Superstore never did that, because its characters’ conflicts were rarely with each other (and even when they were, they usually didn’t last very long). Instead, their chief antagonists were the larger structures of capitalism and the 21st century United States. The store itself often functioned as an island that felt isolated from the world’s problems, a place where its workers could hang out and build long-lasting friendships. But Cloud 9 wasn’t invulnerable to the world’s problems. Its mere existence, more K-mart than Target, felt tenuous. Sooner or later, the capitalist Grim Reaper was coming for Cloud 9, too.

That quality of tackling the world’s problems without being beholden to them also gave Superstore an added boost in its final season, which took place against the backdrop of Covid-19. Sitcoms rarely put their best foot forward in their final years, and Superstore had one hand tied behind its back after the exit of one of its most beloved characters. (The actor moved on to other things but returned for the show’s final handful of episodes.) To make matters worse, season five had been a step down from seasons three and four, a slump that didn’t portend well for what was to come.

Yet season six was one of the show’s very best, largely because its handling of the pandemic’s many idiosyncratic oddities was better than that of any other show on TV. Superstore allowed Covid-19 to recede into the background without losing sight of it entirely. The pandemic wasn’t central to every storyline, but it was always present, in the masks everyone (usually) wore, in the infrequent deep cleans of the store, in the changing safety regulations handed down by corporate.

When I talk about Superstore, I can tend to make it sound like a huge bummer, since it’s easiest to talk about the series in terms of how it confronted important issues. But Superstore was also tremendously funny in lots of ways. Its big group scenes where all of the characters gathered for staff meetings were triumphs of split-second comedic timing, from the show’s writers, actors, and editors. Its tiny interstitials (showing customers misbehaving in Cloud 9) were welcome and funny sight gags, breaks in the storytelling at just the right moments. And its comedic ensemble — which encompassed several dozen recurring characters by the show’s end — was astonishingly deep.

Superstore didn’t reinvent the wheel, but it did rediscover why the wheel was so good in the first place. Its 113 episodes are going to provide many viewers a lot of comfort for years to come, and if you haven’t watched it yet, you have a wonderful marathon ahead of you. It was the best sitcom of its era, and I will miss it terribly.

Superstore is streaming in full in on Hulu in the US. It is available in many countries internationally on Netflix, though the final season is not yet streaming there.

Millions turn to Vox to understand what’s happening in the news. Our mission has never been more vital than it is in this moment: to empower through understanding. Financial contributions from our readers are a critical part of supporting our resource-intensive work and help us keep our journalism free for all. Help us keep our work free for all by making a financial contribution from as little as $3.