labor The Amazon Union Vote Is Over. Here’s What Happens Now.

Whether or not the union’s challenge in Bessemer fails, Amazon will face labor battles elsewhere. 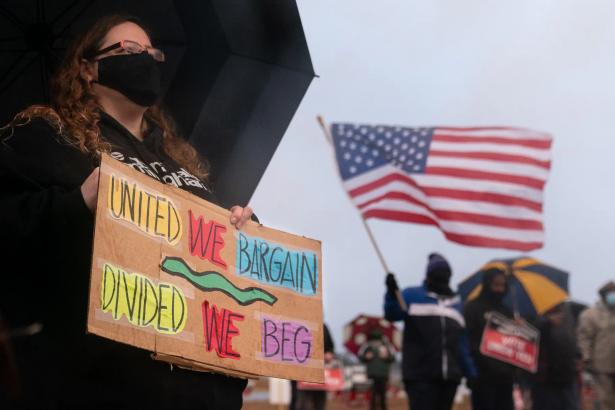 Amazon has come out on top in the largest US union election in the company’s history. But the labor battle appears far from over.

The Retail, Wholesale and Department Store Union (RWDSU) announced on Friday that it planned to file unfair labor practice charges against Amazon over allegations of employee intimidation and manipulation. The union also requested a hearing before the National Labor Relations Board (NLRB) to go over its objections.

Meanwhile, activists who’ve worked for Amazon said the election outcome will not stop more organizing efforts at other Amazon facilities in the US. And reports in recent months point to the Teamsters Union trying to organize other Amazon warehouses and delivery drivers.

In short, the Amazon union conversation is entering a new phase. Here’s what to expect next.

What’s next at the Amazon warehouse in Bessemer, Alabama

Out of 2,536 workers who voted in the union election at Amazon’s Bessemer, Alabama facility (known as BHM1), 1,798 voted against unionization compared to 738 who voted to unionize. Ballots from another 505 workers were challenged by either Amazon or the union, but those votes won’t change the outcome, so the election is over.

In a virtual press event organized by Amazon after the vote count ended, four Bessemer warehouse workers who voted against unionizing said they believe the union lost because most colleagues appreciate the benefits they already have at Amazon and didn’t think they need a union to make changes.

Stokes did not provide details of the changes sought.

Around the same time, pro-union Amazon workers appeared with union officials at a separate virtual press event. The message they tried to get across was that they are not done speaking up or fighting for what they feel they deserve.

“Bezos, you are wrong, you are wrong all the way around,” one Amazon worker, Linda Burns, said, referencing Amazon CEO Jeff Bezos. “You misled a lot of our people.”

Amazon pushed hard to convince workers to vote against unionization. The company set up an anti-union website that harped on the fact that union dues would cost full-time workers close to $500 a year. What the company didn’t say on the website is that, in Alabama, unions can’t require workers to pay union dues. So a union at Amazon’s BHM1 wouldn’t be able to force workers to become members and pay dues or fees. Even in such a situation, these employees would still be covered by a union contract and would be represented by the union if the company violated the agreement in a way that harmed the worker.

Amazon also convened mandatory in-person meetings during worker shifts to stress the downsides of unions, sending frequent texts to workers with anti-union messages and encouraging them to vote no. The company went so far as to post anti-union flyers on employee bathroom stall doors.

The retail giant also did something else that appears to be even more controversial. Amazon pressed the United States Postal Service to install a mailbox on the grounds of the Bessemer warehouse right before voting started — and after the NLRB denied the company’s request to place a ballot drop box on the property. Some workers have said they were intimidated by the installation of the mailbox, as well as the messages from Amazon to use it, and believe that the company wanted to monitor who voted.

Amazon spokesperson Heather Knox previously told the Washington Post that “the RWDSU ... pushed for a mail-only election, which the NLRB’s own data showed would reduce turnout. This mailbox — which only the USPS had access to — was a simple, secure, and completely optional way to make it easy for employees to vote, no more and no less.”

The mailbox and the anti-union messaging around dues will both likely come up in the union’s complaints. The NLRB said that the parties “have five business days to file objections contesting the conduct or results of the election,” and RWDSU has already said it will file unfair labor practice charges against Amazon for certain behavior during the campaign and election. The NLRB could choose to hold a hearing to find out more about the union’s claims if an investigation deems them credible. The labor board could then choose to throw out the results and call for a new election if it sides with the union.

Amazon union battles outside of Bessemer

The Bessemer union election, whether or not the results are upheld, will likely not be the last union drive at an Amazon facility in the US.

Christian Smalls, a former Amazon assistant warehouse manager who the New York Attorney General says was unlawfully fired for his labor activism, told Recode he is in the process of organizing workers at the Staten Island warehouse where he worked before Amazon dismissed him.

“Although we may not have gotten the results we wanted this time around, this doesn’t discourage the workers of Amazon,” he wrote in a text message to Recode. “If anything, it motivates. We believe it’s possible even more so than before, so I still consider this a victory for Bessemer to spark the fuse which ignited us all to be talking about unions again in this country.”

The real cost of Amazon

Smalls and others have created their own union, the Amazon Labor Union, that they hope will eventually represent workers not just in Staten Island but, if successful, at other Amazon facilities too.

There have been signs of labor organizing activity at other Amazon facilities in recent months of well. In Iowa, for example, a local chapter of the Teamsters Union has been working on organizing Amazon warehouse workers and delivery drivers. But a representative for the union said the group is trying to take a different tack than the RWDSU.

“We’re focused on building a new type of labor movement where we don’t rely on the election process to raise standards,” Jesse Case, secretary-treasurer of a Teamsters local in Iowa, told the New York Times.

In the US, union organizers typically need to win an election at each individual facility of a company like Amazon’s. Organizers first have to get 30 percent of workers to sign a card saying they are interested in a union. After that, the NLRB will hold an election, in which a majority of voters have to vote to unionize in order for the union to take hold. What Case, of the Teamsters, is describing is a more informal approach, using protests and other forms of public pressure to get a company like Amazon to make changes in line with what workers want. An Amazon worker group called Amazonians United Chicagoland has also held protests and walkouts throughout the pandemic.

As for the RWDSU, the union’s president said on Friday that the organization has heard from more than 1,000 Amazon workers at other facilities who are interested in unionizing. But the union would not say for sure whether, or where, they might push for an election at other Amazon sites should the Bessemer appeal fail.

“I think it will be a moment to reflect and think about the best strategy moving forward,” Rebecca Givan, a labor professor at Rutgers University, told Recode of whether the RWDSU might consider giving up on Amazon should their Bessemer challenge fail. “We might see other kinds of organizing in other Amazon warehouses, rather than formal union drives under the NLRB process.”

Vox turns 7 this month. Although the world has changed a lot since our founding, we’ve held tight to our mission: to make the most important issues clear and comprehensible, and empower you to shape the world in which you live. We’re committed to keeping our unique journalism free for all who need it. Help us celebrate Vox’s 7th birthday and support our unique mission by making a $7 financial contribution today.