Despite Pandemic Shutdowns, Carbon Dioxide and Methane Surged in 2020

Carbon dioxide levels are now higher than at anytime in the past 3.6 million years. 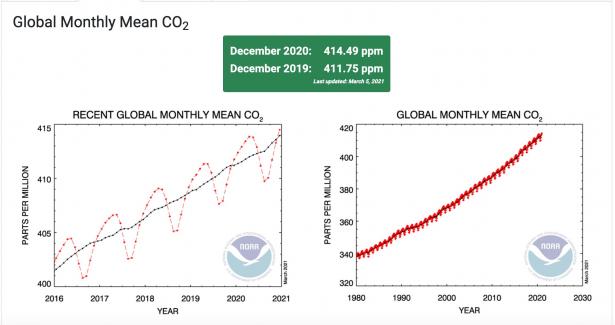 Levels of the two most important anthropogenic greenhouse gases, carbon dioxide and methane, continued their unrelenting rise in 2020 despite the economic slowdown caused by the coronavirus pandemic response, NOAA announced today. 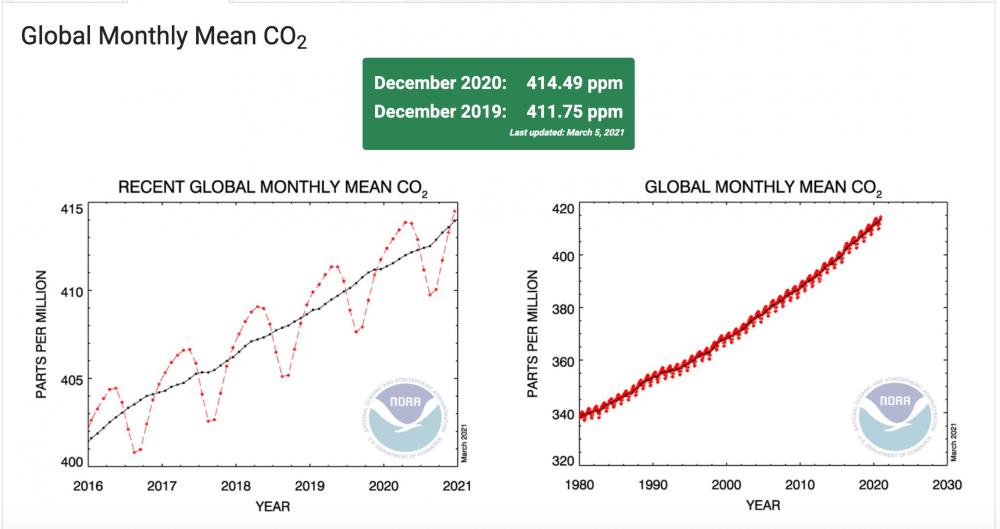 The economic recession was estimated to have reduced carbon emissions by about 7 percent during 2020. Without the economic slowdown, the 2020 increase would have been the highest on record, according to Pieter Tans, senior scientist at NOAA’s Global Monitoring Laboratory. Since 2000, the global CO2 average has grown by 43.5 ppm, an increase of 12 percent.

The atmospheric burden of CO2 is now comparable to where it was during the Mid-Pliocene Warm Period around 3.6 million years ago, when concentrations of carbon dioxide ranged from about 380 to 450 parts per million. During that time sea level was about 78 feet higher than today, the average temperature was 7 degrees Fahrenheit higher than in pre-industrial times, and studies indicate large forests occupied areas of the Arctic that are now tundra.

“Human activity is driving climate change,” said Colm Sweeney, assistant deputy director of the Global Monitoring Lab. “If we want to mitigate the worst impacts, it’s going to take a deliberate focus on reducing fossil fuels emissions to near zero - and even then we’ll need to look for ways to further remove greenhouse gasses from the atmosphere.”

The Global Monitoring Laboratory makes highly accurate measurements of the three major greenhouse gases, carbon dioxide, methane, and nitrous oxide, from four baseline observatories in Hawaii, Alaska, American Samoa, and the South Pole, and from samples collected by volunteers at more than 50 other cooperative sampling sites around the world.  These measurements are incorporated into the Global Greenhouse Gas Reference Network and are a vital reference widely used by international climate researchers.

Analysis of samples from 2020 also showed a significant jump in the atmospheric burden of methane, which is far less abundant but 28 times more potent than CO2 at trapping heat over a 100-year time frame. NOAA’s preliminary analysis showed the annual increase in atmospheric methane for 2020 was 14.7 parts per billion (ppb), which is the largest annual increase recorded since systematic measurements began in 1983. The global average burden of methane for December 2020, the last month for which data has been analyzed, was 1892.3 ppb. That would represent an increase of about 119 ppb, or 6 percent, since 2000. 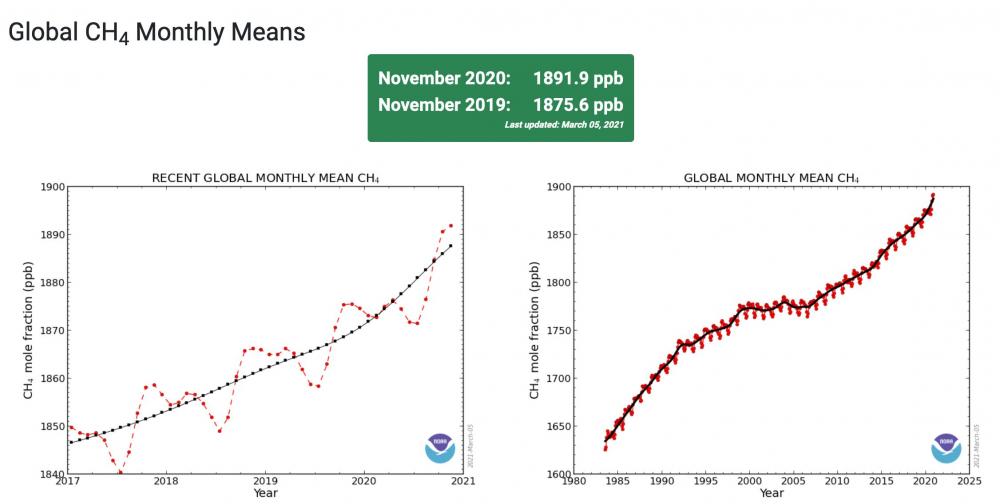 Methane in the atmosphere is generated by many different sources, such as fossil fuel development and use, decay of organic matter in wetlands, and as a byproduct of livestock farming. Determining which specific sources are responsible for variations in methane annual increase is difficult. Preliminary analysis of  carbon isotopic composition of methane in the NOAA air samples done by the Institute of Arctic and Alpine Research at the University of Colorado, indicates that it is likely that a primary driver of the increased methane burden comes from biological sources of methane such as wetlands or livestock rather than thermogenic sources like oil and gas production and use.

National Oceanic and Atmospheric Administration Mission: Conduct research to understand and predict the Earth system; develop technology to improve NOAA science, service, and stewardship; and transition the results so they are useful to society.