labor Is Biden Ditching His Promise to Protect Workers From Covid-19?

The president pledged to require businesses to make workplaces safe from the coronavirus on the campaign trail. Now he may not. 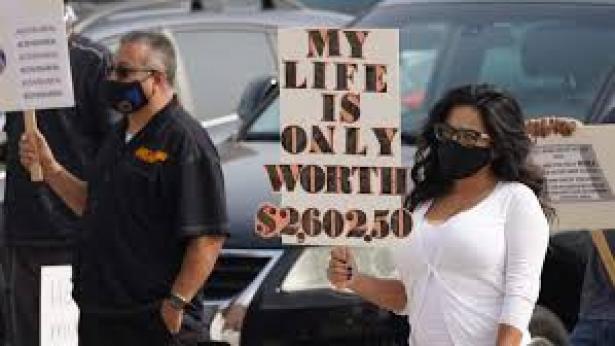 A protestor waves a placard during a demonstration outside the offices of the Occupational Safety and Health Administration in Denver. Worker safety advocates say the federal agency has done little to protect workers during the pandemic, David Zalubouski/AP

Among the various ways President Donald Trump caused more Americans to die needlessly from Covid-19 was by failing to issue a legally enforceable “emergency temporary standard” to protect workers. The 1970 Occupational Safety and Health Act permits the Labor Department to impose such a standard without consulting Congress, a move that the AFL-CIO strenuously urged, but the Trump administration wouldn’t budge. Then-candidate Joe Biden attacked Trump mercilessly for this negligence, and on his first day in office President Biden issued an executive order to initiate prompt action.

Now the Labor Department is ready to go with two emergency standards—one for health care workers and another for everybody else—but the White House, fearful of setting off angry protests, is dithering.

Under the January 21 executive order, the Labor Department’s Occupational Safety and Health Administration was supposed to issue its emergency temporary standard by March 15. (The executive order said the standard would be issued on that date only if judged “necessary,” but that was a formality.) The Ides of March came and went. Now it’s mid-April, and OSHA still hasn’t issued the promised standard—a costly delay for any government order that includes the words “emergency” and “temporary.” To make matters worse, there are whisperings abroad that the White House may drop the whole idea.

“OSHA has been working diligently, as appropriate, to consider what standards may be necessary,” a Labor Department spokesperson told Bloomberg News on April 12, “and is taking the time to get this right.” That sounded ominous. A Labor Department spokesperson told Bloomberg Law the previous week that Labor Secretary Marty Walsh “reviewed the materials, and determined that they should be updated to reflect the latest scientific analysis of the state of the disease.” But Walsh is actually quite impatient, I’m told, to get the rule out. The holdup is at the White House.

“My concern is that White House officials think that vaccination alone will be enough to stem this pandemic,” David Michaels told The New Republic. Michaels is an epidemiologist at the George Washington University School of Public Health; before that, he ran OSHA under President Barack Obama.

We can’t vaccinate our way out of this crisis, Michaels explained, for a variety of reasons. Four months into a fairly successful vaccination effort, Covid-19 cases are going up, not down, and they’ve been doing so for four weeks. More transmissible Covid variants have taken hold—with B.1.1.7. being the most widespread—accounting for the majority of new Covid cases in Florida, Michigan, Minnesota, and Tennessee. Businesses are opening back up, and in March the economy added a stunning 916,000 jobs. That’s a sign that the public health crisis is ebbing. (Hooray!) But this reopening poses health dangers of its own if those returning workers aren’t protected sufficiently from Covid-19. “If we don’t control workplace transmissions,” Michaels said, “the pandemic will continue to worsen.”

None of this is news to President Biden, who’s been begging the states not to drop state mask requirements prematurely. When the Republican governors of Texas and Mississippi did so anyway, Biden got angry and called it “Neanderthal thinking.” Biden’s director of the Centers for Disease Control and Prevention, Rochelle Walensky, expressed similar dismay at Gretchen Whitmer, the Democratic governor of Michigan, the state where Covid-19 is currently most out of control. Whitmer is resisting pleas to issue new public health mandates; this week she asked Biden instead to give Michigan more vaccines. Walensky shot back: “The answer is not necessarily to give vaccine. The answer … is to really close things down.”

Whitmer’s resistance to Covid mandates helps explain why the Biden White House is jittery about issuing an emergency temporary workplace standard. If a Democratic governor is this defiant about Covid restrictions, imagine how angry the MAGA mob will get if the federal government requires every working American to wear a mask on the job (or to take an equivalent precaution). Protests from the business lobby will likely be the least of it, and Trump cultists may be joined by some Democrats who are understandably sick and tired of a pandemic that’s entered its second year.