US climate research outpost abandoned over fears it will fall into sea. National Weather Service station in Massachusetts evacuated on 31 March with a demolition crew set to raze the site this month. 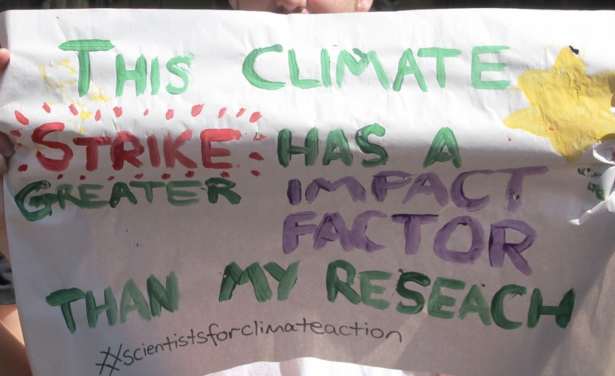 "This climate strike has a greater impact than my climate research, Melbourne climate strike - IMG_4135" by John Englart (Takver) is licensed under CC BY-SA 2.0

Twice a day for the past half a century, a weather balloon to measure atmospheric conditions was released from a research station situated on Cape Cod, Massachusetts. Faced with advancing seas that are set to devour it, the outpost has now been abandoned.

On 31 March, the handful of workers who operated the National Weather Service station in Chatham were evacuated due to fears the property could fall into the Atlantic Ocean. A final weather balloon was released before they left, with a demolition crew set to raze the empty site this month.

Until recently, the weather station had a buffer of about 100ft of land to a bluff that dropped into the ocean, only for a series of fierce storms in 2020 to accelerate local erosion. At times, 6ft of land was lost in a single day, forcing the National Weather Service to order a hasty retreat.

“We’d known for a long time there was erosion but the pace of it caught everyone by surprise,” said Andy Nash, meteorologist in charge at the National Weather Service’s Boston office. “We felt we had maybe another 10 years but then we started losing a foot of a bluff a week and realized we didn’t have years, we had just a few months. We were a couple of storms from a very big problem.”

A parking lot next to the weather station has already been torn up due to the crumbling land, with the building now just 30ft from the edge of the bluff. Nash said his greatest fear was that a researcher, while looking up at a weather balloon as they released it, would inadvertently topple over the edge to their death.

“We got to the point where we ran out of a lot of space and if you were concentrating on the balloon near the edge, oh, that would not be a good situation,” Nash said. “The balloon is fairly big and full of helium but it’s not big enough to hold someone up. It would not save you.”

The weather station was established in 1970, initially releasing weather balloons to gauge temperature, humidity levels and wind speeds as well as operating a weather radar, which was later decommissioned.

The loss of the station will not compromise overall weather monitoring but does leave something of a gap – research sites such as Chatham are scattered about 200 miles apart along the US east coast.

Natural processes have reshaped what is now Cape Cod over millennia. Up to about 11,000 years ago, a much larger land mass jutted out into the Atlantic, only for its coastline of sand and mud to be winnowed away by the tides. More recently a favoured vacation spot for the rich and famous, Cape Cod now resembles an arm flexing its biceps, with Chatham perched at the tip of its elbow.

Andrew Ashton, an associate scientist at the Woods Hole Oceanographic Institution, based on Cape Cod, said that while the cape has naturally shifted shape for centuries, the rising seas and stronger storms spurred by the climate crisis will quicken the pace of change.

“It’s an extremely dynamic environment, which is obviously a problem if you are building permanent infrastructure here,” he said. “We are putting our foot on the accelerator to make the environment even more dynamic. What’s happened with the station is an indication of what we will see along the whole coast. In a way we are unprepared for how much worse things will be with climate change.”

Nash said a new weather station will be installed on Cape Cod, this time on higher ground further from the coast. “This is something communities up and down the coast are facing now,” he said. “The way I look at it is that again we have proof that mother nature is in charge here.”