How Covid Upended a Century of Patterns in U.S. Deaths

The U.S. death rate in 2020 was the highest above normal since the early 1900s — even surpassing the calamity of the 1918 flu pandemic.

A surge in deaths from the Covid-19 pandemic created the largest gap between the actual and expected death rate in 2020 — what epidemiologists call “excess deaths,” or deaths above normal.

Aside from fatalities directly attributed to Covid-19, some excess deaths last year were most likely undercounts of the virus or misdiagnoses, or indirectly related to the pandemic otherwise. Preliminary federal data show that overdose deaths have also surged during the pandemic.

A New York Times analysis of U.S. death patterns for the past century shows how much 2020 deviated from the norm.

A shift in a downward trend

Since the 1918 pandemic, the country’s death rate has fallen steadily. But last year, the Covid-19 pandemic interrupted that trend, in spite of a century of improvements in medicine and public health.

In the first half of the 20th century, deaths were mainly dominated by infectious diseases. As medical advancements increased life expectancy, death rates also started to smooth out in the 1950s, and the mortality rate in recent decades — driven largely by chronic diseases — had continued to decline.

In 2020, however, the United States saw the largest single-year surge in the death rate since federal statistics became available. The rate increased 16 percent from 2019, even more than the 12 percent jump during the 1918 flu pandemic.

Largest increases in death rate since 1910

In 2020, a record 3.4 million people died in the United States. Over the last century, the total number of deaths naturally rose as the population grew. Even amid this continual rise, however, the sharp uptick last year stands out.

Combined with deaths in the first few months of this year, Covid-19 has now claimed more than half a million lives in the United States. The total number of Covid-19 deaths so far is on track to surpass the toll of the 1918 pandemic, which killed an estimated 675,000 nationwide.

According to the Centers for Disease Control and Prevention, about 10 percent of the deaths last year can be directly attributed to Covid-19, which overtook other leading causes of death — like chronic lower respiratory diseases and unintentional injuries, such as car accidents and overdose deaths — to become the third biggest killer, after heart disease and cancer. 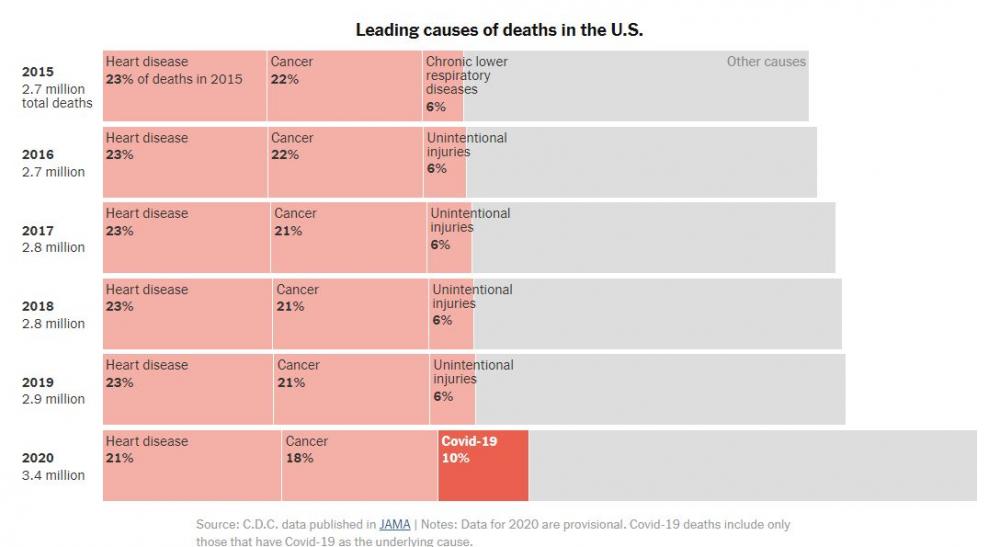 Total death numbers for 2020 are from the Centers for Disease Control and Prevention. Data for 2020 are provisional because of lags in the reporting of deaths.

Historical death numbers and death rates are from the National Vital Statistics System at the C.D.C. and C.D.C. Wonder. Death rates are age-adjusted by the C.D.C. using the 2000 standard population. Not all states were included in years prior to 1933. For earlier years, rates are based only on the population of the states that are included.

Expected rates for each year are calculated using a simple linear regression based on rates from the previous five years. The death rate in 1918 was excluded when calculating expected rates.

Denise Lu is Graphics editor at The New York Times, previously at The Washington Post.