labor The Labor Battle for the Right to Pee

App delivery workers for DoorDash, Grubhub, Uber Eats, and other tech giants are fighting for a living wage, employment status, and the simple right to pee in privacy.

May 3, 2021 Luis Feliz Leon TNR
Printer friendly
The Labor Battle for the Right to Pee Published May 3, 2021 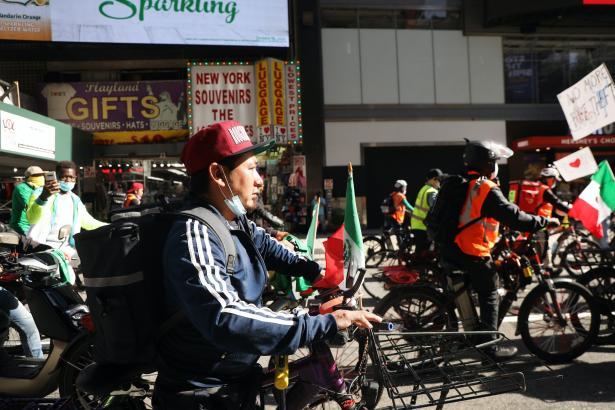 Earlier this week, StreetsBlog New York reported on a community board meeting in a wealthy Manhattan neighborhood where members debated a nonbinding proposal that would encourage restaurants to let app-based delivery workers use their bathrooms. While there isn’t anything like a definitive count, current estimates hold that there are between 50,000 and 80,000 of these workers in New York City—a number that surged in the pandemic. It seems obvious that they need somewhere to pee. “They deserve better. We need to start treating them as if their lives and their working conditions mattered,” Ken Coughlin, a Community Board 7 Transportation Committee member, said in his introduction to the resolution. “And bathroom access is as good a place as any to start.”

The response from the board was either surprising or not, depending on how closely you’ve been following the issue. “You can’t force a restaurateur to let someone use the bathroom if they’re opposed to it,” another member replied. “The whole thing is asinine.”

“We use the Gatorade bottle because it is wider,” Sergio Solano, a DoorDash delivery worker and one of the creators of the Facebook page El Diario de los Deliveryboys en la Gran Manzana, which chronicles the struggles of e-bike food delivery drivers in the city, told me in Spanish. “Discreetly, we pee in the bottle behind the stairways of buildings after delivering an order,” Solano continued, adding that it’s the only option when parks are closed in the winter or restaurants refuse bathroom access, as they often do.

“You have to pee in the street basically like a dog,” Uber Eats driver Kouamé Kuado told me on the corner of West 148th Street and Broadway in Upper Manhattan, straddling his e-bike and clasping a Dunkin’ iced coffee in one hand. “Because if you don’t find a McDonald’s around, you have to do it in the street or you’re gonna pee on yourself.”

This is why bathrooms became a central focus for the delivery cyclists who came together last year to form Los Deliveristas Unidos, a collective of food delivery workers largely from Mexico and Guatemala, who began self-organizing early in the pandemic through Facebook and WhatsApp. Since then, they have grown to thousands of members with support from the Brooklyn-based workers’ center Worker’s Justice Project. Among their demands: a living wage and transparency on tips from the tech giants that deny their status as workers, safety from robberies, standards on arbitrary deactivations, weight of loads they ferry on trips, and access to basic accommodations like bathrooms and a warm, dry place to wait out the time between deliveries.

You see these demands echoed by gig and other essential workers. A subcontracted Amazon delivery driver in Rochester, New York, likewise recognizes the superiority of the wide-mouth Gatorade bottle for strategic bathroom breaks. Warehouse workers at Amazon also report skipping bathroom breaks to avoid penalties for “time off task.” These aren’t the only demands made by these workers, but we are witnessing the battle for the bathroom as a crucial feature among  growing movements of precarious and low-wage workers across the United States. It’s an increasingly militant movement driven, at least in part, by the simple right to piss.

Around the early months of the pandemic, Jonán Mancilla and Lucy Villano—a married couple, both delivery workers—started a Facebook group to bring together drivers from the platform Relay. That Facebook page eventually became Los Deliveristas Unidos.

Since then, Mancilla has begun recruiting and identifying new leaders. On the afternoon I’m with him, he hands the Uber Eats driver Kuado a sticker in English reading “I Love New York. I’m Essential” with a delivery driver in black silhouette against a white background. They’re building visibility throughout the city. Last week, more than 2,000 delivery workers in New York City hit the streets, the whirr of their e-bikes, bells, and beeps causing a righteous cacophony.

The fight ahead is a long one, but the message is spreading and their organizing is beginning to force the issue for people in power. In December, DoorDash responded to a wave of negative coverage about its subcontracted workers’ lack of access to bathrooms. “DoorDash reached out to us for a meeting,” Mancilla said. The company responded with a vague pledge to do better and an early commitment from 200 restaurants to allow delivery workers to use their restrooms. “Because we made ourselves known,” Mancilla said.

It’s not enough. Antony, another delivery driver, told me that out of 20 restaurants he routinely delivers for, only five allow him bathroom access. According to early data from the Worker Institute at Cornell University, 67 percent of delivery workers in the city report being denied access to a restaurant bathroom. The denial is often baked into the job: A message a delivery worker showed me from the Relay app gives an address and instructions for pickup; it also reads: “Don’t ask to use restroom!!” Another from Grubhub reads: “Come and wait at the host station. Please do not use the restroom, ask for a drink or bring outside food to eat while you wait.”

Members of the City Council are now looking to take up the Deliveristas’ fight: The City reported this week that members are planning to introduce a package of six bills to address the demands from the delivery workers, including bathroom access.

Labor unions have also thrown their weight behind the Deliveristas’ efforts. SEIU Local 32BJ, the city’s largest union of service employees, has come out as a key supporter. Given its history as an ally of immigrant workers, championing the delivery workers’ cause was in keeping with 32BJ’s previous fights against tech companies like Uber, and campaigns like winning wage hikes for low-wage workers and recent victories on just cause protections prohibiting fast-food employers from arbitrarily firing workers. “I think naturally 32BJ said, ‘Yes, we’re fighting the big fast-food companies; we’re not gonna say no to the deliveristas,’” Ligia Guallpa, executive director of Worker’s Justice Project, told me.

Some of the delivery workers say they want to formalize their organizing efforts and be classified as employees and build a union. (Biden Labor Secretary Marty Walsh said on Thursday that he believes most gig workers should be classified as employees—and receive related employee benefits.) “A delivery workers’ union would be very nice. If the union is there, I am not afraid that I will be assaulted, or that I will be robbed or something,” Mancilla said, reasoning that the political muscle a union has would provide delivery drivers redress when fighting around safety concerns.

The change can’t come soon enough. From under the awning of a closed store in Uptown Manhattan, workers fan out to make deliveries, chatting in between drop-offs about the shared indignities of the job, their demands for safety and access to bathrooms. They debate their organizational structure and explore ways to reach out to drivers from West Africa. They show me where recent muggings have occurred and share frustrations about the New York Police Department’s failures to keep them safe at bridge crossings and other locations where they are targeted for theft. Emotions are raw, and motivation is high.

The pandemic has put a spotlight on tech giants as the system’s most adroit exploiters of workers in a sprawling, disaggregated service economy in which the costs of convenience are passed on to an essential and disposable immigrant workforce. In the absence of basics like access to a bathroom, workers’ struggles are raising demands and posing the central question of what we owe each other in the present landscape of capital’s maximum exploitation of labor.

These giants would like to offer crumbs in response to demands for living wages and decent working conditions: Instacart has responded by rewarding delivery drivers with a measly $200 grocery credit for the frontline services rendered to those safely ensconced in home-office fortresses. At Amazon, after defeating a union drive in Bessemer, Alabama, Jeff Bezos promised “a better vision for how we create value for employees.” In the face of these efforts to further squeeze workers, Los Deliveristas are offering a counterexample of a potential upsurge of low-wage worker organizing, stretching from Mexico, Brazil, China, and Taiwan.

“I’m outside for 10 hours. I have to use the bathroom,” Mamadou Kokeina, who has worked as a delivery driver since 2015 for Seamless, Grubhub, Uber Eats, and DoorDash, told me. “I’m picking up food to bring to your customers, so you should allow me at least to use the bathroom,” he says. “We are human. We have needs.”

They know what they deserve. “During the pandemic, we fed the majority of New Yorkers,” said Abde , another delivery driver, who asked to use only his first name to avoid retaliation from the platforms. “Risking our lives, our health—there we were making the deliveries.”