More than half of the country’s 100 largest low-wage employers rigged pay rules in 2020 to give CEOs 29 percent average raises while their frontline employees made 2 percent.

May 11, 2021 Sarah Anderson Inequality
Printer friendly
How Corporations Pumped Up CEO Pay While Their Low-Wage Workers Suffered in the Pandemic Published May 11, 2021 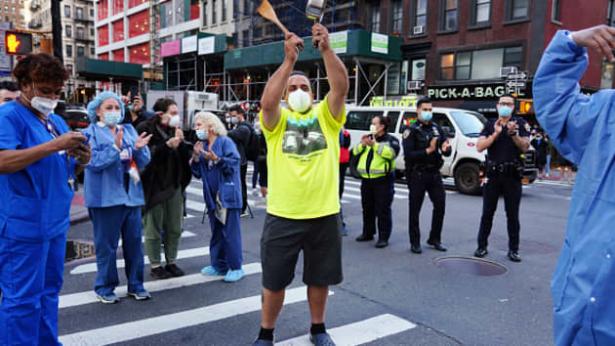 A man bangs a spatula against a pot to show gratitude to medical workers from Lenox Hill Hospital as part of the nightly #ClapBecauseWeCare during the coronavirus pandemic on May 07, 2020 in New York City., Cindy Ord | Getty Images

During the pandemic, low-wage workers have lost income, jobs, and lives. And yet many of the nation's top-tier corporations have been fixated on protecting their wealthy CEOs, even bending their own rules to pump up executive paychecks.

A new Institute for Policy Studies report finds that 51 of the country's 100 largest low-wage employers moved bonus goalposts or made other rule changes in 2020 to give their CEOs 29 percent average raises while their frontline employees made 2 percent less.

How exactly did these companies rig their CEO pay rules? Let's look at a few examples.

Hilton CEO Christopher Nassetta had the largest paycheck among the rule-rigging companies. After he failed to meet the goals associated with his multi-year stock awards, the board "modified" the awards by disregarding poor 2020 financial results and changing the performance metrics. Those maneuvers inflated his total compensation to $56 million—1,953 times as much as the company's median worker pay of $28,608 in 2020.

At YUM Brands, the owner of KFC, Pizza Hut, and Taco Bell, CEO David Gibbs garnered positive media coverage by donating $900,000 of his salary to pay for $1,000 bonuses for restaurant general managers. But the board changed its bonus metrics to give Gibbs a special cash bonus and stock grant worth more than 2.5 times his voluntary salary cut. This largesse boosted Gibbs's total compensation to $14.6 million — 1,286 times as much as median worker pay of $11,377. The fast food giant did not offer hazard pay to these frontline employees, whose average wages are just $9.75 per hour, according to Payscale.

At Coca-Cola, none of the top executives met their bonus targets last year either, but the company board used "discretion" to give them all bonuses anyway. For CEO James Quincey, that $960,000 bonus, combined with new stock-based awards, drove his total compensation package above $18 million, over 1,600 times as much as the company's typical worker pay. In December 2020, Coca-Cola announced plans to cut about 2,200 jobs, or 17 percent of its workforce. About 1,200 of the layoffs will hit U.S. workers.

How did corporations justify such extreme disparity in a year of extraordinary hardship for workers?

The most common defense was the "talent retention" argument. In a report filed with the SEC, for example, Hilton explained that the "projected zero payouts" on the CEO's performance stock awards would've "impaired the awards' ability to retain key talent."

This is the Great Man Theory: one heroic individual in the corner office almost single-handedly creates company value, so pay him whatever it takes to prevent him from abandoning ship.

So what can we do about it?

One bill pending in Congress, the Tax Excessive CEO Pay Act, would use tax policy to incentivize corporations to narrow their pay divides by reining in executive compensation and lifting up worker wages.

Under this proposal, companies with pay gaps between their highest-paid executive and median worker of less than 50 to 1 would not owe an extra dime. Corporations that refuse to narrow their gaps below this threshold would face graduated rate increases starting at 0.5 percentage points on ratios of more than 50 to 1 and topping out at 5.0 percentage points for companies with gaps above 500 to 1.

The Tax Excessive CEO Pay Act would generate an estimated $150 billion over 10 years that could be used to create good jobs and meet human needs. If the bill had been in place in 2020, Walmart, with a pay gap of 1,078 to 1, would have owed an extra $1 billion in federal taxes—enough to fund 13,502 clean energy jobs for a year.

Amazon, with a 1,596-to-1 pay ratio, also would have owed an extra $1 billion, enough to underwrite 115,089 public housing units for a year. (Amazon's highest-paid exec last year was Worldwide Consumer CEO David Clark, with $46.3 million.)

It's time for public policy to shift corporate America away from a business model that creates obscene wealth for a few at the top and economic insecurity for so many of the rest of us. By inflating executive compensation while their workers struggled during a pandemic, corporate boards have just strengthened the case for tax penalties on huge CEO-worker pay gaps.

Sarah Anderson directs the Global Economy Project of the Institute for Policy Studies, and is a co-editor of Inequality.org.