The repo market is a fragile house of cards waiting for a strong wind to blow it down, propped up by misguided monetary policies that have forced central banks to underwrite its highly risky ventures. 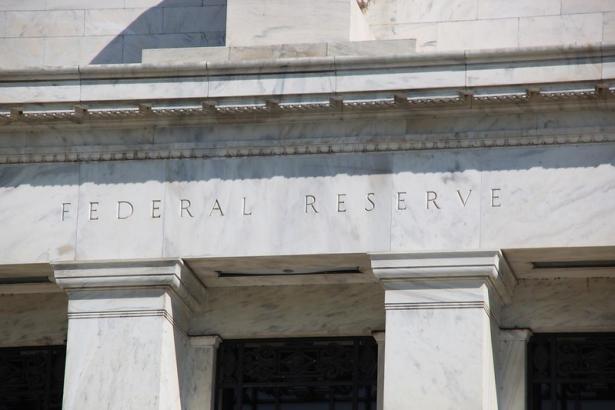 The main entrance to the Federal Reserve Building in Washington, D.C.,Tim Evanson/Flickr

Although the repo market is little known to most people, it is a $1-trillion-a-day credit machine, in which not just banks but hedge funds and other “shadow banks” borrow to finance their trades. Under the Federal Reserve Act, the central bank’s lending window is open only to licensed depository banks; but the Fed is now pouring billions of dollars into the repo (repurchase agreements) market, in effect making risk-free loans to speculators at less than 2%.

This does not serve the real economy, in which products, services and jobs are created. However, the Fed is trapped into this speculative monetary expansion to avoid a cascade of defaults of the sort it was facing with the long-term capital management crisis in 1998 and the Lehman crisis in 2008. The repo market is a fragile house of cards waiting for a strong wind to blow it down, propped up by misguided monetary policies that have forced central banks to underwrite its highly risky ventures.

The Financial Economy Versus the Real Economy

The Fed’s dilemma was graphically illustrated in a Dec. 19 podcast by entrepreneur/investor George Gammon, who explained we actually have two economies – the “real” (productive) economy and the “financialized” economy. “Financialization” is defined at Wikipedia as “a pattern of accumulation in which profits accrue primarily through financial channels rather than through trade and commodity production.” Rather than producing things itself, financialization feeds on the profits of others who produce.

The financialized economy – including stocks, corporate bonds and real estate – is now booming. Meanwhile, the bulk of the population struggles to meet daily expenses. The world’s 500 richest people got $1.2 trillion richer in 2019, while 45% of Americans have no savings, and nearly 70% could not come up with $1,000 in an emergency without borrowing.

Gammon explains that central bank policies intended to boost the real economy have had the effect only of boosting the financial economy. The policies’ stated purpose is to increase spending by increasing lending by banks, which are supposed to be the vehicles for liquidity to flow from the financial to the real economy. But this transmission mechanism isn’t working, because consumers are tapped out. They can’t spend more unless their incomes go up, and the only way to increase incomes, says Gammon, is through increasing production (or with a good dose of “helicopter money,” but more on that later).

So why aren’t businesses putting money into more production? Because, says Gammon, the central banks have put a “put” on the financial market, meaning they won’t let it go down. Business owners say, “Why should I take the risk of more productivity, when I can just invest in the real estate, stock or corporate bond market and make risk-free money?” The result is less productivity and less spending in the real economy, while the “easy money” created by banks and central banks is used for short-term gain from unproductive financial investments.

Existing assets are bought just to sell them or rent them for more, skimming profits off the top. These unearned “rentier” profits rely on ready access to liquidity (the ability to buy and sell on demand) and on leverage (using borrowed money to increase returns), and both are ultimately underwritten by the central banks. As observed in a July 2019 article titled “Financialization Undermines the Real Economy”:

When large highly leveraged financial institutions in these markets collapse, e.g., Lehman Brothers in September 2008, central banks are forced to step in to salvage the financial system. Thus, many central banks have little choice but to become securities market makers of last resort, providing safety nets for financialized universal banks and shadow banks.

That is what is happening now in the repo market. Repos work like a pawn shop: the lender takes an asset (usually a federal security) in exchange for cash, with an agreement to return the asset for the cash plus interest the next day unless the loan is rolled over. In September 2019, rates on repos should have been about 2%, in line with the fed funds rate (the rate at which banks borrow deposits from each other). However, repo rates shot up to 10% on Sept. 17. Yet banks were refusing to lend to each other, evidently passing up big profits to hold onto their cash. Since banks weren’t lending, the Federal Reserve Bank of New York jumped in, increasing its overnight repo operations to $75 billion. On Oct. 23, it upped the ante to $165 billion, evidently to plug a hole in the repo market created when JPMorgan Chase, the nation’s largest depository bank, pulled an equivalent sum out. (For details, see my earlier post here.)

By December, the total injected by the Fed was up to $323 billion. What was the perceived danger lurking behind this unprecedented action? An article in The Quarterly Review of the Bank for International Settlements (BIS) pointed to the hedge funds. As ZeroHedge summarized the BIS’ findings:

[C]ontrary to our initial take that banks were pulling from the repo market due to counterparty fears about other banks, they were instead spooked by overexposure by other hedge funds, who have become the dominant marginal – and completely unregulated – repo counterparty to liquidity lending banks; without said liquidity, massive hedge fund regulatory leverage such as that shown above would become effectively impossible.

Hedge funds have been blamed for the 2008 financial crisis, by adding too much risk to the banking system. They have destroyed companies by forcing stock buybacks, asset sales, layoffs and other measures that raise stock prices at the expense of the company’s long-term health and productivity. They have also been a major factor in the homelessness epidemic, by buying foreclosed properties at fire sale prices, then renting them out at inflated prices. Why did the Fed need to bail these parasitic institutions out? The BIS authors explained:

Repo markets redistribute liquidity between financial institutions: not only banks (as is the case with the federal funds market), but also insurance companies, asset managers, money market funds and other institutional investors. In so doing, they help other financial markets to function smoothly. Thus, any sustained disruption in this market, with daily turnover in the U.S. market of about $1 trillion, could quickly ripple through the financial system. The freezing-up of repo markets in late 2008 was one of the most damaging aspects of the Great Financial Crisis (GFC).

At $1 trillion daily, the repo market is much bigger and more global than the fed funds market that is the usual target of central bank policy. Repo trades are supposedly secured with “high-quality collateral” (usually U.S. Treasuries). But they are not risk-free, because of the practice of “re-hypothecation”: the short-term “owner” of the collateral can use it as collateral for another loan, creating leverage – loans upon loans. The IMF has estimated that the same collateral was reused 2.2 times in 2018, which means both the original owner and 2.2 subsequent re-users believed they owned the same collateral. This leveraging, which actually expands the money supply, is one of the reasons banks put their extra funds in the repo market rather than in the fed funds market. But it is also why the repo market and the U.S. Treasuries it uses as collateral are not risk-free. As Wall Street veteran Caitlin Long warns:

U.S. Treasuries are … the most rehypothecated asset in financial markets, and the big banks know this. … U.S. Treasuries are the core asset used by every financial institution to satisfy its capital and liquidity requirements – which means that no one really knows how big the hole is at a system-wide level.
This is the real reason why the repo market periodically seizes up. It’s akin to musical chairs – no one knows how many players will be without a chair until the music stops.

ZeroHedge cautions that hedge funds are the most heavily leveraged multi-strategy funds in the world, taking something like $20 billion to $30 billion in net assets under management and levering it up to $200 billion. According to The Financial Times, to fire up returns, “some hedge funds take the Treasury security they have just bought and use it to secure cash loans in the repo market. They then use this fresh cash to increase the size of the trade, repeating the process over and over and ratcheting up the potential returns.”

This … explains why the Fed panicked in response to the GC repo rate blowing out to 10% on Sept 16, and instantly implemented repos as well as rushed to launch QE 4: not only was Fed Chair Powell facing an LTCM [Long Term Capital Management] like situation, but because the repo-funded [arbitrage] was (ab)used by most multi-strat funds, the Federal Reserve was suddenly facing a constellation of multiple LTCM blow-ups that could have started an avalanche that would have resulted in trillions of assets being forcefully liquidated as a tsunami of margin calls hit the hedge funds world.

“Helicopter Money” – The Only Way Out?

The Fed has been forced by its own policies to create an avalanche of speculative liquidity that never makes it into the real economy. As Gammon explains, the central banks have created a wall that traps this liquidity in the financial markets, driving stocks, corporate bonds and real estate to all-time highs, creating an “everything bubble” that accomplishes only one thing – increased wealth inequality. Central bank quantitative easing won’t create hyperinflation, says Gammon, but “it will create a huge discrepancy between the haves and have nots that will totally wipe out the middle class, and that will bring on MMT or helicopter money. Why? Because it’s the only way that the Fed can get the liquidity from the financial economy, over this wall, around the banking system, and into the real economy. It’s the only solution they have.” Gammon does not think it’s the right solution, but he is not alone in predicting that helicopter money is coming.

A direct drop of money on the people would certainly help to stimulate the economy, but it won’t get the parasite of financialization off our backs; and Gammon is probably right that the Fed lacks the tools to fix the underlying disease itself. Only Congress can change the Federal Reserve Act and the tax system. Congress could impose a 0.1% financial transactions tax, which would nip high-frequency speculative trading in the bud. Congress could turn the Federal Reserve into a public utility mandated to serve the productive economy. Commercial banks could also be regulated as public utilities, and public banks could be established that served the liquidity needs of local economies. For other possibilities, see Banking on the People here.

Solutions are available, but Congress itself has been captured by the financial markets, and it may take another economic collapse to motivate Congress to act. The current repo crisis could be the fuse that triggers that collapse.

Ellen Brown is an attorney, chairman of the Public Banking Institute, and author of thirteen books including her latest, "Banking on the People: Democratizing Money in the Digital Age."

Portside thanks the author for permission to reprint this article.