The attempts by settlers to forcibly displace Palestinian families have set off a catastrophe.

May 12, 2021 Rula Salameh The New York Times
Printer friendly
Why So Much Rests on the Fate of a Tiny Neighborhood in East Jerusalem Published May 12, 2021 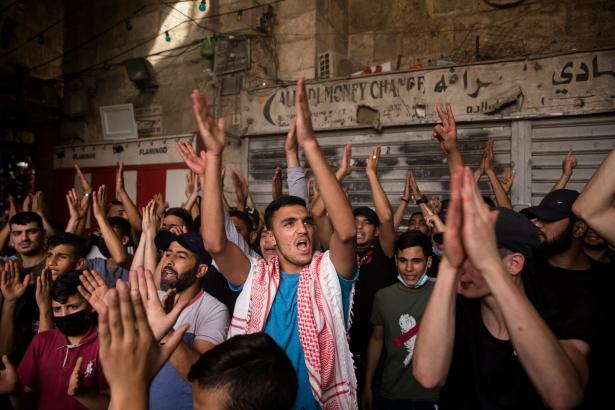 JERUSALEM — I watched the wailing ambulances bring the injured, the medical staff carry them on stretchers and the nurses guide them into the emergency ward. I saw blood-soaked clothes and gauze-wrapped necks and faces.

On Monday more than 330 Palestinians were wounded by the Israeli police at Al Aqsa Mosque in Jerusalem. Many of those needing medical attention were taken to Al Makassed hospital, about a mile and a half from the mosque, in East Jerusalem.

Tensions had been rising as Israel blocked access for Palestinians from outside Jerusalem headed to the mosque for prayers during the last days of Ramadan, the sacred Muslim month of fasting. Serious violence erupted on Jerusalem Day, when Israelis annually celebrate their capture of East Jerusalem in 1967. Early Monday, Israeli police officers stormed the mosque compound and began firing rubber-tipped bullets and stun grenades at some Palestinians who were praying and others who were throwing stones.

I am a Palestinian community organizer and film producer and live in Beit Hanina, less than five miles from Al Aqsa Mosque and Al Makassed hospital. I have been part of the Palestinian struggle against Israeli occupation for years.

Soon after the Israeli forces entered Al Aqsa, I called a spokesman for the Palestinian Red Crescent, who was inside the compound. “The police have been shooting people with rubber bullets and tear gas canisters,” he told me, stress and exhaustion evident in his voice. “People are being shot in their chests, faces, heads.” The injured included older people, women and children, he continued, though the majority were young men. (The Israeli police force said 21 officers had also been injured.)

I raced with a few friends to the hospital to check how we could help, whether it was donating blood for the injured or arranging food and transportation for their families. Desperate voices were calling out for information about their sons, husbands, brothers, who had been taken there for treatment. I overheard a doctor instruct two nurses about a patient. “He is still in critical condition. He might lose his eye,” he said. “We’ll do further tests and then inform his family.” The overworked nurses nodded and rushed to get new arrivals onto examination tables.

My phone rang relentlessly. Friends and colleagues from all over the world were calling and asking what they could do for Sheikh Jarrah, a tiny East Jerusalem neighborhood about two miles from the Aqsa compound. The events unfolding at Sheikh Jarrah were the context of the escalation of violence between Palestinians and Israeli forces at Al Aqsa Mosque and elsewhere in the territories.

Palestinian residents of the neighborhood have been protesting for weeks to prevent the eviction of Palestinian families sought by Israeli settlers. The protests underscore that the expulsions in Sheikh Jarrah are part of the broader expulsion of Palestinians from their homeland — a process that started during the establishment of Israel in 1948 and turned about 750,000 Palestinians into refugees.

The protests at Al Aqsa against denying us access to our holy sites are related to the same oppressive process of disenfranchisement and occupation.

The Sheikh Jarrah families who have faced eviction are Palestinian refugees who were driven from their homes in Haifa and Jaffa during the 1948 war. Israel prevented refugees from returning to their cities, seized their homes and moved Jewish Israeli families in. In the 1950s, the Jordanian government, which controlled East Jerusalem until 1967, settled 28 refugee families in Sheikh Jarrah in coordination with the United Nations Relief and Works Agency for Palestine Refugees in the Near East.

After the 1967 war, when Israel extended its occupation to the West Bank, East Jerusalem and Gaza, Jewish settlers began making claims on the refugees’ houses in Sheikh Jarrah. The settlers have been relying on a 1970 Israeli law that allows Jewish people to reclaim properties their families owned in East Jerusalem before 1948.

In 2009, settlers began taking over some of the families’ homes in Sheikh Jarrah, displacing 53 refugees, including 20 children, under Israeli court order. I met the affected families in 2009. We organized together, brought delegations of Israeli and international solidarity activists to the neighborhood and laid the foundations for a grass-roots movement. I co-produced a documentary on the community’s response to those expulsions.

Last fall, Israeli courts ruled to evict several more Palestinian families from their homes in Sheikh Jarrah. Four of those families appealed, and an Israeli Supreme Court hearing was scheduled for their case on Monday.

Led by a new generation of Palestinians, the community in Sheikh Jarrah resumed and heightened its protest movement. Scores of Palestinian youths joined the Sheikh Jarrah families to break the Ramadan fast each night, eating, singing and dancing together, despite being attacked by the settlers with stones and being beaten, Tasered, arrested and doused with a stinking liquid by the police.

On Saturday, thousands of Palestinians were on their way to Jerusalem to spend the final days of Ramadan in Al Aqsa Mosque, as is our tradition. When stopped by the Israeli police from entering the city, they parked their cars and buses on the highway and began walking. Residents from across East Jerusalem — including Sheikh Jarrah — drove to the highway to pick them up.

It gives me hope to see displays of unity and support from all parts of Palestine and abroad. #SaveSheikhJarrah pops up on my Twitter feed every few seconds, in Arabic and English. Activists on the ground have made it clear that these evictions are not a “real estate deal between private parties,” as the Israeli government tries to portray it, but part of a systemic policy to replace Palestinian residents of East Jerusalem with Jewish Israelis.

The energy and momentum emanating from Sheikh Jarrah have been palpable and inspiring. The world is watching Sheikh Jarrah. On Sunday, the attorney general of Israel asked the Supreme Court to postpone its ruling. A new date will be set within a month. I believe the suspension of the court ruling and the escalation of violence by Israel in Al Aqsa and Gaza is an effort to shift focus from Sheikh Jarrah.

The Sheikh Jarrah families and their struggle against forced displacement yet again are emblematic of our liberation struggle. After the Israeli police injured hundreds of Palestinians in Al Aqsa Mosque, militants in Gaza fired a barrage of rockets at Israel — which, according to the Israeli military, injured six Israeli civilians. Israel retaliated with airstrikes on Gaza, killing at least 28 people, including 10 children.

I received numerous messages about Al Aqsa, Gaza and Sheikh Jarrah, which underscored that what happens at Al Aqsa and in Gaza is intrinsically tied to Sheikh Jarrah. We see our collective fate in the future of Sheikh Jarrah.

I also see our collective fate in the irrepressible resistance led by my young friends in Sheikh Jarrah. I saw it in the eyes of 22-year-old Mohammed El-Kurd as he lit a cigarette, perched atop the hood of an Israeli police car. I saw it in his younger brother Mahmoud and their neighbor Tala Obeid, who were arrested on May 4 while protesting and were marched to the police station, keeping their backs erect and heads held high.

The Netanyahu government miscalculates that our resistance to encroaching colonization and Israeli supremacy will wane in the coming days. It is not only the future of the families in Sheikh Jarrah that is at stake. It is the future of our homes, our homeland.

Rula Salameh is a Palestinian community organizer and film producer from Jerusalem. She co-produced the documentary “Sheikh Jarrah, My Neighborhood,” which received a Peabody Award in 2012.