A statement signed by 124 groups says the current conflagration is part of a "broader context of Israel's ongoing policy to forcibly remove Palestinians from their homes through eviction, home demolition, and displacement." 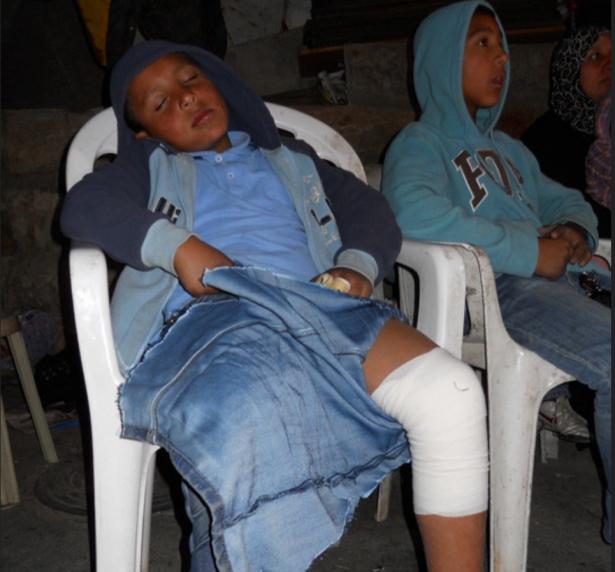 As the death toll from Israel's ongoing air and artillery strikes in Gaza topped 120 on Friday and as Israeli security forces killed at least 10 Arab protesters in the occupied West Bank, over 100 U.S.-based advocacy groups issued a statement urging the Biden administration to condemn the Israeli government's plan to ethnically cleanse thousands of Palestinians from neighborhoods in East Jerusalem.

"Israeli state violence is, of course, not limited to Jerusalem. We are horrified by Israel's use of disproportionate and deadly force against Palestinians in Gaza which have already resulted in the killings of dozens of Palestinians, including children."
—100+ groups' statement

The groups—which include peace, faith-based, labor, racial justice, and other organizations—wrote that they "stand in solidarity with the Palestinian residents of occupied East Jerusalem currently at risk of losing their homes and call on the Biden administration to immediately and publicly condemn the Israeli government's plans to forcibly displace 1,550 Palestinians from their homes in the Sheikh Jarrah and Al-Bustan neighborhoods," while urging the U.S. administration to "exert the utmost diplomatic pressure to prevent these potential war crimes from taking place."

The statement says the planned expulsions are occurring in the "broader context of Israel's ongoing policy to forcibly remove Palestinians from their homes through eviction, home demolition, and displacement, with the express intent of pushing Palestinians out of Jerusalem in order to create and maintain a Jewish majority and supremacy in the city."

Proud to be part of this statement signed by over 100 progressive organizations demanding that the Biden administration stop Israel's forced displacement of Palestinians in #SheikhJarrah, and flanking the calls of @RepMarieNewman & @repmarkpocan's letter https://t.co/7nNbmI2yWc

Decrying the "overwhelming violence and force from Israeli police and settlers" against Palestinians at the Al-Aqsa Mosque during the holy month of Ramadan, the statement notes specific disturbing incidents that have occurred in East Jerusalem, including "a police officer kneeling on a protester's neck while he shouts he is being suffocated" and Jerusalem Deputy Mayor Arieh King telling a Palestinian activist it was a "pity" that he wasn't shot in the head.

Israeli state violence is, of course, not limited to Jerusalem. We are horrified by Israel's use of disproportionate and deadly force against Palestinians in Gaza which have already resulted in the killings of dozens of Palestinians, including children. This comes within the context of Israel's 14-year illegal blockade on Gaza which has created an open-air prison with severe shortages of life-saving medicines, food, electricity, and clean water, making life unsafe and unbearable. We call on the Biden administration to condemn this violence and address its root causes: Israeli blockade and occupation.

The signatories said that the Biden administration must "uphold international law and act in accordance with the urgency of the moment to prevent the Israeli government's forced displacement of thousands of Palestinians."

Finally, they affirmed their support for a letter led by U.S. Reps. Marie Newman (D-Ill.) and Mark Pocan (D-Wis.) and signed by 23 other House Democrats urging the Biden administration to pressure Israeli leaders to "desist from its plans to demolish Palestinian homes in Al-Bustan and evict Palestinians from their homes in Sheikh Jarrah."

"We call on the Biden administration to condemn this violence and address its root causes: Israeli blockade and occupation."
—statement

The groups' statement comes a day after progressive members of the U.S. House of Representatives convened a special hour—also organized by Newman and Pocan—during which the lawmakers discussed the root causes of Israeli-Palestinian violence, namely the foundation of Israel through settler colonization, ethnic cleansing, and ongoing oppression and apartheid.

"If we are to make good on our promises to support equal human rights for all, it is our duty to end the apartheid system that for decades has subjected Palestinians to inhumane treatment and racism, reducing Palestinians to live in utter fear and terror of losing a child, being indefinitely detained or killed because of who they are, and the unequal rights and protections they have under Israeli law," said Rep. Rashida Tlaib, a Michigan Democrat and the first Palestinian-American woman elected to Congress. "It must end."