A new biography captures a poet’s commitments, reversals, and reinventions. 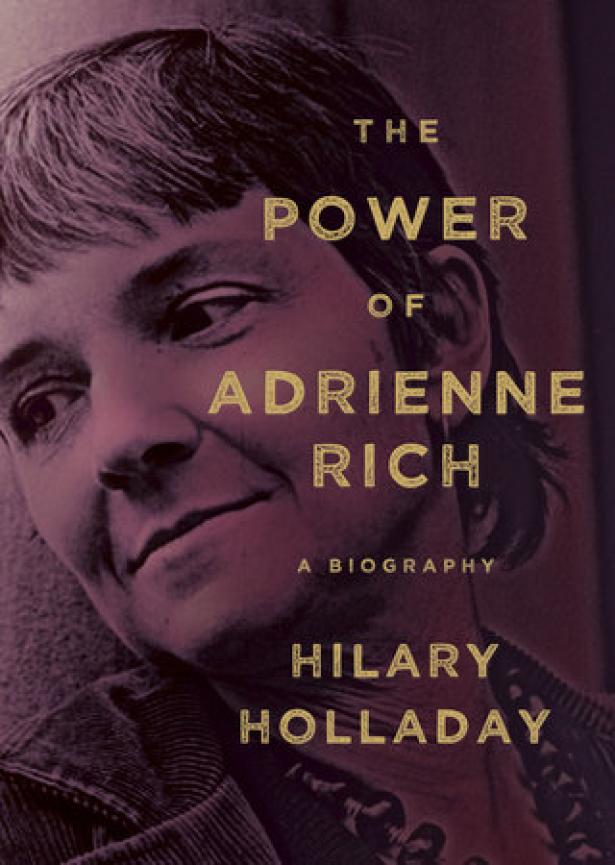 In 1975, Adrienne Rich wrote a letter to the editor in The New York Review of Books, scolding Susan Sontag for suggesting that contemporary feminists had played a part in promoting Nazi filmmaker Leni Riefensthal’s films. In response, Sontag called Rich, among other things, “anti-intellectual.” A few months later, Rich wrote to Sontag, asking to meet in person. In May 1975, Sontag agreed. Having already had the same lover—Lilly Engler, also Rich’s therapist and the subject of her Twenty-One Love Poems—the women met to talk. They ended up having an affair.

The relationship didn’t last, and in a 1977 interview, Rich would say she “regretted airing her grievances with Sontag in print.” This anecdote, like so many others within Hilary Holladay’s capacious new biography of Rich, encapsulates the mixed-up and messy, personal and political shape and texture of Adrienne Rich’s life. It shows, too, how willingly she often looked back later on choices she’d made with regret.

Commitments and reversals, a continually impressive ability to seduce and enthrall, define the major periods in Rich’s life. Born in 1929, for the first 18 years of her life she is the dutiful young daughter brought up in a tony Baltimore suburb, desperate to please her father, sometimes at her mother’s expense. From 1948 to 1952, she’s the star Radcliffe undergraduate, winning the Yale Younger Poets Prize. From 1953 until 1963, she’s the wife and mother, “sleepwalking” through the early years of her sons’ lives. In 1971 comes the seemingly sharp turn to feminism and lesbianism in middle age, an embrace of her Judaism, “the thing itself and not the myth” in the mid-1980s, and her disavowal of the term feminism, which she declared had “become a little meaningless,” to argue for “women’s liberation” instead in the mid-1990s.

In The Power of Adrienne Rich, Holladay sees in this life of revision an ongoing crisis. She describes what she sees as the “wound” of Rich’s life: “the gnawing sense that she lacked a definitive identity.” Her work and the persona she performed were filled with a commitment to role-switching. “Nothing but my self? … My selves,” she wrote in her 1978 poem “Integrity.” “I am she: I am he,” she wrote in her 1971 poem “Diving Into the Wreck.” Yet even Rich sometimes got trapped. “Snapshots of a Daughter-in-Law” (1963) is ripe with images of birdcages, vaults, steamer trunks, and pantries. Even Rich sometimes asserted ideas in her art, in her public persona, that expressed certainty and a sense of completeness, while the intimate, daily versions of these same ideas proved harder to live ou

The particular power of performance functions as a through line in Rich’s life. She moves from the role of the good daughter to the good lover, then wife, then mother. “I felt myself perceived by the world simply as a pregnant woman, and it seemed easier … to perceive myself so,” she wrote in her 1976 tome on motherhood, Of Woman Born, which was reissued last month. From her marriage to the economist Alfred Conrad in 1953—a relationship in which Rich said she saw “the frame for my whole conception of life”—until their divorce 17 years later, his academic career determined their priorities. Rich would be so consumed by her role as wife and mother that the only book she published in the first nine years of their marriage was The Diamond Cutters (1955)—which she would later claim to regret publishing.

Like so many women of her time, Rich found that her early audiences, those she sought to please, were men—her father but also critics, fellow poets, friends. As her interests shifted, her ability to perform her expected role within these contexts also began to change. In 1972, one of the most consistent and intense collegial relationships of her life, with the poet Hayden Carruth, began to fray. “After a decade of letters,” writes Holladay, Rich “now insisted her old friend and admirer answer for his weaknesses and respond meaningfully to her searing pain and rage.” Carruth was self-centered, and liked their conversations to stay mostly on his work and his concerns. Newly aware of how patriarchy infused almost all her interactions, Rich was asking her friend to answer for this built-in inequity, warning him that women she knew who were younger had “simply given up on men.” But Carruth was hurt and put off by this turn and, though the correspondence would continue for years still, he “was beginning to see Rich’s temper as ungovernable.” Rich was catapulting forward in her work and in her thinking, but, in each of these evolutions, there was also more intimate personal loss.

Principles were not enough to pull Rich through her most difficult relationships. By the time of her mother’s death, at the age of 102 in October 2000, Rich and her mother spoke very rarely. She would lament, even in her later years, that her mother had locked her in a household closet, seldom mentioning that her mother had done this at her father’s request, though Of Woman Born concerns itself with the struggles and the impossibility of motherhood, the ways the patriarchy strips the mother of the agency one might need to be found fully culpable in acts like this. As Holladay writes, “For all the time Adrienne had put into thinking and writing about the hardships of motherhood, she couldn’t forgive Helen for her flaws and shortcomings.” For all the ways she celebrated shifts and reconsiderations in her thinking, Rich the person, daughter, mother, lover, was often slower to make these shifts in her life.

The gap between life and art was always fraught for Rich. Throughout her career, critics complained it was too narrow or too wide. She was either too personal or too political—they couldn’t decide. Her 1963 collection, Snapshots of a Daughter-in-Law, an unrelenting assessment of her early years of motherhood, was Rich’s first book not to be reviewed in The New York Times; it was described in The New York Review of Books as “trying as hard as possible, against her taste for melodrama, to be ordinary.” Most hurtful to Rich was the reaction of her father—for whom she “spent her life becoming the accomplished poet he wanted her to be” and whom she also “hated for a long time.” He wrote in a letter to her not long after the book’s publication, “I wouldn’t want to present these ‘beat,’ sordid, irritable, often nasty poems of unrelieved despair to the world as representative of the quality of my mind, heart, character and life.” Decades later, as “confessional” poetry (a term Rich rejected) had long since come into vogue, a review of An Atlas for a Difficult World in the Harvard Review yearned for her to speak as “a woman rather than a dogma, a person rather than an agenda.”

What these critics may have misunderstood was that she was not particularly interested in presenting herself solely as she was; her poetry was attuned to the unrealized possibilities of things, the way everyday realities could be transformed through ideas. “For now, poetry has the capacity … to remind us of something we are forbidden to see,” Rich said in a speech she gave in Scotland in 2006, six years before her death. “This ongoing future, written off over and over, is still within view. All over the world, its paths are being rediscovered and reinvented: through collective action, through many kinds of art.”

Rich had her own realities to overcome. From the age of 22, she suffered from rheumatoid arthritis, and she was in near constant physical pain for much of her life. Audiences and friends would comment often on the extraordinary frailness of her body, in contrast with the power of her voice and ideas. “It is hard to depict how vast a load of fear, despair, and self-hatred lifts when the incessant, daily pain lifts and is replaced by only mild mechanical discomfort,” Rich wrote in a letter to friends. The persona she presented to the world was indomitable, almost inconceivable; what she was was often in pain, cowed.

It’s the more resilient side of Rich that Holladay chooses to name in the title of the book. Rich’s 1974 poem “Power” discusses Marie Curie and her unwillingness to acknowledge she “suffered from radiation sickness”:

She died    a famous woman    denying

her wounds    came    from the same source as her power

Rich, of course, was more willing than most to look directly at her wounds. That Holladay uses this same word, “wound” at the outset of her project—that she uses Rich’s own words to define the terms of the biography—is the book’s great strength.

Yet, if it’s the role of the artist to name and contain the sensations of life, it is the job of the biographer to show us the mess and murk of the artist’s life that the work does not or cannot hold. What I yearned for most in the reading was a more rigorous attempt to push past the language Rich has already offered into the spaces that her own words had not yet shown: the morning after those nights up late after the kids were in bed when Rich drank cold glasses of straight vodka and smoked cigarettes, the artist-mother long after she’d stopped “sleepwalking,” not as an idea to which we might all aspire but as a tired, worn-out reality. A writer isn’t always the open, willing, vulnerable artist; sometimes she is the maybe craven, maybe exploitative, clawingly ambitious wife. This is what a life is, in other words, in all its strife and pleasure, angst and isolation, when the artist has no choice but simply live it.