"Unless we abolish the filibuster, there will be no progress on any agenda focused on justice, fairness, or basic survival," said Sen. Ed Markey. 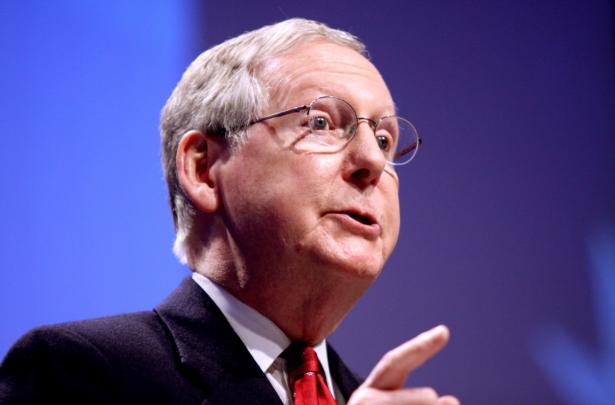 Intensifying progressive calls to eliminate the legislative filibuster, Senate Republicans wielded the archaic procedural tool on Friday to torpedo a bill that sought to establish an independent commission to probe the January 6 insurrection at the U.S. Capitol.

"Without reforming the filibuster, we can't even get a bipartisan commission investigating an insurrection. The choice is simple: protect the filibuster or protect our democracy."
—Leah Greenberg, Indivisible

Just six Senate Republicans—Lisa Murkowski of Alaska, Susan Collins of Maine, Ben Sasse of Nebraska, Rob Portman of Ohio, Bill Cassidy of Louisiana, and Mitt Romney of Utah—joined Democrats in voting to break the filibuster, leaving the chamber six votes shy of the 60 required to proceed to a final vote on the legislation. View the full roll call here.

"If Senate Republicans can block an independent commission investigating a deadly armed attack on the Capitol because it might hurt their poll numbers with insurrectionists, then something is badly wrong with the Senate," Sen. Elizabeth Warren (D-Mass.) tweeted following the vote. "We must get rid of the filibuster to protect our democracy."

A coalition of nearly 60 progressive advocacy organizations led by Indivisible echoed that message in a joint statement released Friday, noting that "this is no longer a debate about hypotheticals."

"Senate Republicans have filibustered a bipartisan bill to form a bipartisan commission investigating an attack on their workplace and the seat of our democracy," the groups said. "Despite Senate Democrats 'imploring' Republicans to work with them to get this done, [Senate Minority Leader Mitch] McConnell and his caucus swatted away every attempt at good faith bipartisan work and committed themselves to partisan obstruction."

"Now the path forward is clear: The filibuster must be eliminated as a weapon that a minority of senators can wield to veto popular democracy-protecting bills," the coalition added.

This is where we stand right now. Without reforming the filibuster, we can't even get a bipartisan commission investigating an insurrection.

The choice is simple: protect the filibuster or protect our democracy. https://t.co/fDbPFBDdu7

The Senate GOP's decision to block an inquiry into the January 6 insurrection—which was led by a mob of Trump supporters—comes as the Republican Party is engaged in a sweeping assault on democracy nationwide, deploying the former president's so-called "Big Lie" about the 2020 election results to justify voting restrictions that have drawn comparisons to the Jim Crow era.

"The truth is that the insurrection never actually stopped," The Week's Ryan Cooper wrote in a column earlier this week. "What happened on January 6 was just one part of a huge effort to overturn the 2020 election—through the courts, bullying local officials, and finally an outright putsch—that is ongoing to this day."

Adam Jentleson, executive director of the Battle Born Collective, said in a statement that after Friday's vote, it would be a "dereliction of duty" for Democrats to refuse to abolish the filibuster.

"There is no longer any question about whether Republicans will put country over party—it is clear to anyone with eyes to see that they will not," Jentleson added. "The only question that remains is whether Democrats will take the steps necessary to protect our democracy, and end the filibuster."

"The only question that remains is whether Democrats will take the steps necessary to protect our democracy, and end the filibuster."
—Adam Jentleson, Battle Born Collective

The filibuster can be scrapped with a simple-majority vote, meaning Senate Democrats would need the support of every member of their caucus plus a tie-breaking vote from Vice President Kamala Harris.

But Sens. Joe Manchin (D-W.Va.), Kyrsten Sinema (D-Ariz.), and other conservative Senate Democrats remain opposed to altering or nixing the filibuster, which is also standing in the way of voting rights legislation, immigration reform, and other key Democratic priorities.

"It's the filibuster or democracy," Rep. Ilhan Omar (D-Minn.) tweeted on Friday.

Asked Thursday whether he would be willing to change his position on the filibuster if Republicans used the tool to sink the January 6 commission, Manchin told reporters, "I'm not ready to destroy our government."

"It's time to come together," said Manchin. "I think there's ten good people."

A system that allows a 54-35 vote margin to be called a "stinging defeat" for the side that got the 54 is just not sustainable. This is over one way or another-it either slides into authoritarian minority rule or the filibuster goes away and allows an actual democracy to function pic.twitter.com/PNi2uF2z2q

In a speech on the Senate floor in the wake of Friday's vote, Senate Majority Leader Chuck Schumer (D-N.Y.) blasted Republican lawmakers for mounting a "partisan filibuster against an independent commission to report on January 6th"—but did not endorse progressive demands to eliminate the filibuster as a tool of nearly effortless obstruction.

Sen. Ed Markey (D-Mass.), by contrast, was unequivocal. In a statement, the Massachusetts Democrat said that "it is crystal clear that the vast majority of Senate Republicans are unwilling to try and legislate in good faith on anything of importance to the American people."

"Unless we abolish the filibuster," Markey warned, "there will be no progress on any agenda focused on justice, fairness, or basic survival."