For the Nez Perce, a Proposed Gold Mine Is a Symbol of Broken Promises

The U.S. government stole Nez Perce treaty land to make way for gold miners in the 1860s. A century and a half later, gold mining again threatens the tribe’s homeland.

May 30, 2021 Marcie Carter In These Times
Printer friendly
For the Nez Perce, a Proposed Gold Mine Is a Symbol of Broken Promises Published May 30, 2021 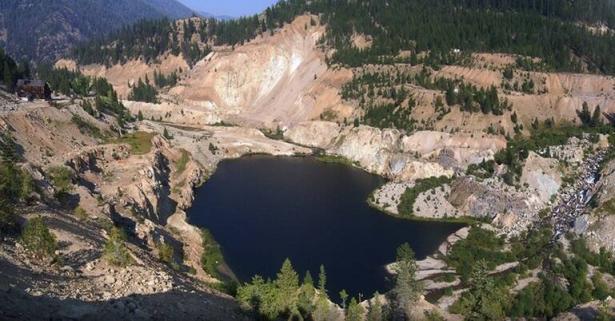 The "Glory Hole" is part of the Stibnite Superfund site. Perpetua Resources' proposed Stibnite Gold Project would expand the site to be one of the largest gold mines in the country. , PHOTO COURTESY OF THE NEZ PERCE TRIBE

As a citizen of the Nez Percé, or Nimíipuu, which means the People, I look at gold mining as a symbol of broken promises.

In 1855, when my ancestors entered into a treaty with the United States, we ceded millions of acres in what eventually became Idaho, Oregon and Washington. In exchange we reserved an exclusive homeland and rights to fish, hunt, gather and pasture throughout our vast aboriginal territory.

Then in 1860 gold was discovered, and thousands of prospectors flooded across our borders in violation of the treaty, damaging our sacred places and natural resources and causing unspeakable injury to our people.

The United States failed to uphold the terms of the 1855 Treaty and instead forced the Nez Percé to enter into a new treaty in 1863. Known by us as the ​“steal treaty,” it reduced the size of our homeland by 90% and allowed miners and other non-Indians to remain on lands they had illegally occupied.

When several Nez Percé bands led by Chief Joseph demanded that the United States uphold the promises it had made in the 1855 Treaty, and refused to move to the new reservation, the federal government resorted to military force, prompting the Nez Percé War of 1877.

A century and a half later, the promise of gold once again threatens our homeland and way of life.

"For us, the Nimíipuu, the value of the land, fish, wildlife and other natural resources will always be worth more than gold."

The Stibnite Gold Project is proposed by Perpetua Resources, formerly Midas Gold, a Canadian company that recently moved to Idaho. The mine site is located within Nez Percé ceded territory in the headwaters of the South Fork Salmon River, a watershed that once was home to one of the largest Chinook salmon runs in the Columbia River Basin. We have treaty-reserved rights in this culturally significant area, and have worked over the years to restore fish habitat that benefits everyone, an effort that cost millions of dollars.

The Stibnite Gold Project would be one of the largest gold mines in the country. The company aims to extract between four and five million ounces of gold from three open pit mines during the estimated 21- to 28-year life of the project.

Despite Perpetua’s claim that it will ​“restore the site” that is already heavily polluted by a legacy of mining, the proposal to expand the area and mine it again will add hundreds of millions of tons of additional mining waste and tailings. The proposal will also require storage of the new toxic waste, plus active water treatment long after the company is done mining the site.

Perpetua’s mining would also restrict or prohibit treaty-reserved access for more than two decades or even longer. It would also destroy critical habitat for endangered Chinook salmon and bull trout, and other resources cherished by the Nez Percé and all Idahoans.

The Nez Percé doubt that Perpetua Resources will stick around if the mine is permitted by the federal government. Perpetua is now majority-owned by a New York-based corporation that recently replaced most of the mining company’s governing board.

The company might opt to sell its shares for a huge profit and then exit the scene. A new corporation could then step in to extract gold, leaving behind a new legacy of toxic contamination and resource destruction that will plague our communities for generations to come.

We know all too well the pattern of exploit-and-abandon. Corporations don’t keep their promises, and federal mining laws offer little or no accountability. We want this permit to mine gold denied.

The United States, as a signatory to the 1855 Treaty and trustee to the Tribe, has a responsibility to protect and honor our treaty rights and resources. These treaty obligations, which predate the 1872 General Mining Law, are rooted in the Supremacy Clause of the Constitution and represent the solemn word of the United States.

For us, the Nimíipuu, the value of the land, fish, wildlife and other natural resources will always be worth more than gold. Chief Joseph left us with these words that we will never forget: ​“It makes my heart sick when I remember all the good words and all the broken promises.”

The United States must not turn a blind eye to the Stibnite Gold Project. We ask that this country honor Nez Percé treaty rights and protect the lands and resources important to all the people of Idaho.

Marcie Carter is a citizen of the Nez Percé Tribe and a contributor to Writers on the Range, (writersontherange.org), a nonprofit dedicated to spurring lively conversation about the West.

Support Progressive Journalism. If you value In These Times, and if you believe in the movements and causes it supports, will you make a tax-deductible donation to support this work?