'Our Entire Democracy Is Now at Risk' Because of GOP Attacks, Warn 100+ Scholars

"We urge members of Congress to do whatever is necessary—including suspending the filibuster—in order to pass national voting and election administration standards." 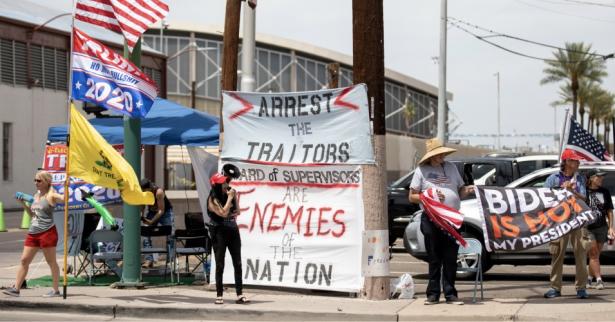 Protestors in support of former President Donald Trump gather outside Veterans Memorial Coliseum where ballots from the 2020 general election wait to be recounted on May 1, 2021 in Phoenix. ,Photo: Courtney Pedroza/Getty Images)

More than 100 scholars of democracy on Tuesday released a joint "statement of concern" calling on Congress to combat ongoing GOP attacks on voting rights and ensure fair and free future U.S. elections with federal legislation.

The scholars also criticize GOP lawmakers for pushing "what we consider radical changes to core electoral procedures in response to unproven and intentionally destructive allegations of a stolen election," adding: "Collectively, these initiatives are transforming several states into political systems that no longer meet the minimum conditions for free and fair elections. Hence, our entire democracy is now at risk."

New America senior fellow Lee Drutman, a leading organizer of the letter, told Washington Post columnist Greg Sargent that "we wanted to create a strong statement from a wide range of scholars, including many who have studied democratic backsliding, to make it clear that democracy in America is genuinely under threat."

"The playbook that the Republican Party is executing at the state and national levels is very much consistent with actions taken by illiberal, anti-democratic, anti-pluralist parties in other democracies that have slipped away from free and fair elections," Drutman explained.

The statement highlights that various experts have concluded the November election "was extremely secure and free of fraud," and that voters are worried about it because GOP officials, led by former President Donald Trump, "have manufactured false claims of fraud." The persistence of that "Big Lie" has generated growing fears of what's to come—with some political observers warning the last election was a "test run."

The scholars echo those warnings:

In future elections, these laws politicizing the administration and certification of elections could enable some state legislatures or partisan election officials to do what they failed to do in 2020: reverse the outcome of a free and fair election. Further, these laws could entrench extended minority rule, violating the basic and longstanding democratic principle that parties that get the most votes should win elections.

Democracy rests on certain elemental institutional and normative conditions. Elections must be neutrally and fairly administered. They must be free of manipulation. Every citizen who is qualified must have an equal right to vote, unhindered by obstruction. And when they lose elections, political parties and their candidates and supporters must be willing to accept defeat and acknowledge the legitimacy of the outcome. The refusal of prominent Republicans to accept the outcome of the 2020 election, and the anti-democratic laws adopted (or approaching adoption) in Arizona, Arkansas, Florida, Georgia, Iowa, Montana, and Texas—and under serious consideration in other Republican-controlled states—violate these principles. More profoundly, these actions call into question whether the United States will remain a democracy. As scholars of democracy, we condemn these actions in the strongest possible terms as a betrayal of our precious democratic heritage.

According to the scholars, "The most effective remedy for these anti-democratic laws at the state level is federal action to protect equal access of all citizens to the ballot and to guarantee free and fair elections."

They write that "a new voting rights law (such as that proposed in the John Lewis Voting Rights Act) is essential but alone is not enough. True electoral integrity demands a comprehensive set of national standards that ensure the sanctity and independence of election administration, guarantee that all voters can freely exercise their right to vote, prevent partisan gerrymandering from giving dominant parties in the states an unfair advantage in the process of drawing congressional districts, and regulate ethics and money in politics."

While expressing a preference for major democracy reforms that are bipartisan, the statement recognizes the "hyper-polarized political context" of the current moment, specifically pointing to congressional Republicans' recent refusal to create a commission to investigate a pro-Trump mob's January 6 attack on the U.S. Capitol.

"We urge members of Congress to do whatever is necessary—including suspending the filibuster—in order to pass national voting and election administration standards that both guarantee the vote to all Americans equally, and prevent state legislatures from manipulating the rules in order to manufacture the result they want," the scholars write. "Our democracy is fundamentally at stake. History will judge what we do at this moment."

One option is for the U.S. Senate to pass the For the People Act (pdf), a sweeping package of pro-democracy reforms that was approved by the House in March without any Republican support. Although Senate Majority Leader Chuck Schumer (D-N.Y.) has committed to holding a vote on the bill later this month, given the upper chamber's 50-50 split, sending to Biden's desk would almost certainly require first getting rid of the filibuster.

In his Post column about the scholars' statement, Sargent noted that "Sen. Joe Manchin III (D-W.Va.) is the most visible obstacle here. But an unknown number of other moderate Democrats are also reluctant to cross that Rubicon, and it's unclear how much effort Biden will put into making that happen."

Signatory Pippa Norris, a Harvard University political scientist and founding director of the Electoral Integrity Project, declared in a separate statement Tuesday that "the Senate filibuster has to go," pointing out that other legislatures have similar rules but they are often for constitutional amendments versus routine legislation.

"The Senate needs to act urgently to change its procedural rules to protect American democracy and then pass a comprehensive package of moderate reforms designed to address genuine concerns about electoral integrity and to protect voting rights in U.S. elections," Norris said.

The January 6 insurrection "was the warning bell," she added. "The 2022 midterm election stress test is fast approaching. This is not Chicken Little alarmism, folks. Alas, it's real."