"The idea this pandemic will be dealt with by a mixture of rich country charity and corporate goodwill is such nonsense," said one global justice advocate. "People's Vaccine now." 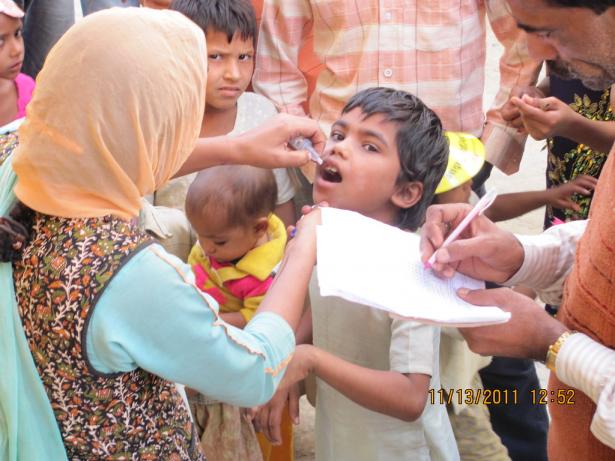 The White House announced Thursday its plan to donate 25 million excess Covid-19 vaccine doses to other nations—a plan progressives described as an "inadequate" response to the ongoing pandemic, urging the Biden administration to invest $25 billion to ramp-up global vaccine manufacturing.

According to he Associated Press, the U.S. "aims to share 80 million doses globally by the end of June, most through COVAX," the United Nations-backed program for global vaccine sharing. "Of the first tranche of 25 million doses, the White House said about 19 million will go to COVAX," with the remaining 6 million directed to "U.S. allies and partners."

"The donation of these few doses is welcome but deeply insufficient, and no substitute for a plan of scale and urgency to end the pandemic," Peter Maybarduk, director of Public Citizen's Access to Medicines program, said in a statement. "The U.S. needs to do more, much more."

PrEP4All, an organization of people who have been personally affected by the HIV epidemic and are fighting for universal access to life-saving medications, reminded President Joe Biden that "people are dying."

While the virus has officially claimed the lives of nearly 3.7 million people worldwide so far, the World Health Organization (WHO) estimated recently that Covid-19's true death toll is between six to eight million people.

Despite having billions of dollars that could be used to boost vaccine manufacturing and increase the pace of inoculation worldwide, the Biden administration "has barely used any of it," said PrEP4All.

25 million is woefully inadequate. @POTUS has $16 billion available for vaccine scale-up, more than enough to vaccinate the entire world in less than a year. The administration has barely used any of it.

Maybarduk concurred. "The U.S. contribution to global vaccine access has been woefully inadequate to date," he said. "Each day of delay means more lives lost."

Progressives praised Biden last month after he endorsed the India- and South Africa-led motion at the World Trade Organization (WTO) to suspend Big Pharma's coronavirus-related patents for duration of the pandemic.

While Biden on Thursday reiterated his support for temporarily waiving intellectual property barriers to increase the production of tests, treatments, and vaccines, the proposal for a waiver of the WTO's Agreement on Trade-Related Aspects of Intellectual Property Rights (TRIPS) is still being blocked by a handful of countries—mostly rich nations including Canada, the United Kingdom, and members of the European Union.

At the same time that Canada, the U.K., and the E.U. are artificially suppressing global vaccine supply by opposing the TRIPS waiver, these wealthy countries have "signed deals to get hundreds of millions of doses of Covid-19 vaccines and boosters over the next two years," the Wall Street Journal reported Wednesday.

Impoverished nations desperately clamoring for life-saving shots, meanwhile, have been told to rely on COVAX—which depends on donations from the very same countries gobbling up enough doses to last through 2023—even though public health advocates have stressed that the U.N.-backed program is not capable of meeting global needs.

"The idea this pandemic will be dealt with by a mixture of rich country charity and corporate goodwill is such nonsense," Nick Dearden, director of Global Justice U.K., said in response to news about the latest iteration of vaccine hoarding.

Rich countries lock down doses of Pfizer and Moderna doses well into the future. The idea this pandemic will be dealt with by a mixture of rich country charity and corporate goodwill is such nonsense. #PeoplesVaccine Now https://t.co/Fe1vxfVBdI

Currently, of the more than two billion shots that have been administered worldwide, just 0.3% have gone into the arms of people living in low-income countries, with people in high- and middle-income countries receiving 85% of the doses, according to the New York Times. The vaccination rates in North America (62%) and Europe (49%) are far higher than in South America (29%), Asia (24%), Oceania (13%), and Africa (2.5%).

This manifestation of global inequality, which critics have called "vaccine apartheid," has intensified the spread of Covid-19, particularly in South Asia, Latin America, and Africa. If present trends continue, experts say, most people in the Global South won't be vaccinated until 2024, which gives the virus more chances to mutate, endangering the lives and livelihoods of millions of people everywhere.

To avoid such a deadly delay, Maybarduk said, "the White House should quickly specify ambitious global production targets and help lead the international community in support of vaccine manufacturing."

Applauding Biden's decision Thursday to lift Defense Production Act ratings for several vaccines, Maybarduk said that "the Biden administration is at least stepping out of the way of global scale-up."

"Now we need the Biden administration to use similar power to accelerate the provision of raw materials worldwide," he added.

As Common Dreams has reported, a coalition of more than 60 progressive advocacy groups, led by Public Citizen, has called on Biden to establish a global vaccine production program to bring the Covid-19 pandemic to an end and prepare for future ones.

Last week, Public Citizen outlined how an investment of just $25 billion dollars—around 3% of what the U.S. spends on its military each year—would be enough to set up regional manufacturing hubs to produce eight billion coronavirus vaccine doses in less than a year.

"The U.S. government," Maybarduk said Thursday, "should invest $25 billion in urgent public vaccine manufacturing at sites worldwide to make eight billion doses of mRNA vaccine within a year's time and share those vaccine recipes with the world."