What could a labor radical with a doctorate in Marxian economics accomplish in the neoliberal “stop and frisk,” Bloomberg administration? The answer: reform policies he advocated, recalibrating poverty to the benefit of the poor, remain policy today. 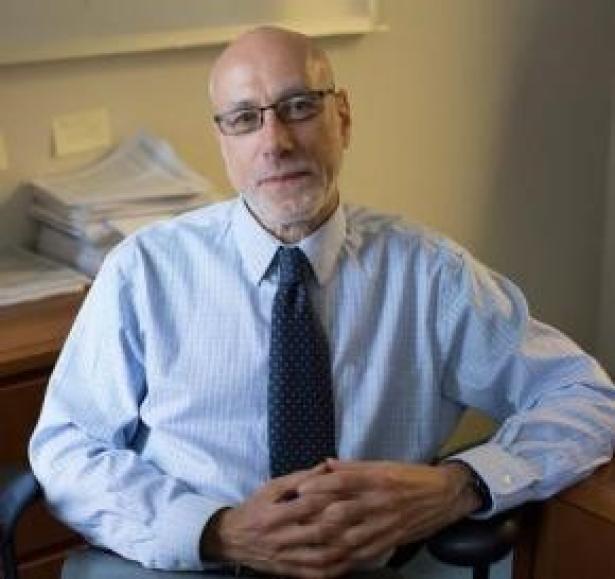 Mark Levitan in his final days as an Adjunct Professor at Hunter College’s Dept. of Urban Affairs and Planning.,

Even at 70 plus years of age, Mark Levitan was still climbing mountains, a diversion he cherished. Now at 73 he is gone. My dear friend and comrade died May 20 after losing a year-long battle with leukemia. His life’s trajectory was perhaps unpredictable but it was by any measure wholly remarkable. Beginning as a radical college student, Mark went on become a trade union militant until the mass layoffs in the auto industry laid him low. On the rebound, he trained as an economist working first for unions, then as a researcher at a leading New York City antipoverty agency. Later, he became instrumental in the way the city recalibrated, for the better, how poverty and unemployment were measured. His was a life worth living.

An obituary in the New York Times (May 21) credits his work even with influencing the Obama administration.

Working for the city meant being a researcher for the Bloomberg administration, a bizarre pairing at least, and one that the Times’ obit writer, Sam Roberts, commented on, characterizing Levitan as “an improbable recruit by the administration of Mayor Michael R. Bloomberg. Working for an unapologetic capitalist, he took a job in which he managed to practice some of what he had been preaching for most of his career as a socialist organizer and outside critic.”

Mark had another quality too often rare among those engaged in social change; he knew how to listen and ask pertinent questions. That was a quality British Marxist and coal miner Ken Coates, writing in an early issue of Socialist Register, believed was a prerequisite for being an effective organizer. As Coates put it, a radical “needs to know how to talk to a shepherd about sheep.” Just as important, “he [or she] has to know how to listen.” Mark excelled at both. He was also the first person I ever heard use the German/Yiddish expression Bolshevik Sitzfleisch (literally “butt meat” but figuratively “endurance” or “perseverance”) as a guiding principle.

The August 1972 issue of Workers’ Power, then a socialist biweekly focused in part on trade union democracy and labor rank and file upsurges, contains a statement Mark and I wrote—titled Two Radical America Editors Join the I.S. [International Socialists]. The statement, which refers to the then extant left history periodical, is redolent of what many radicals came to believe, that as good as the magazine and similar journalistic and propagating efforts were, they wouldn’t likely build a movement. As our statement read in part “the decision to take on an affiliated identity for people who have been politically autonomous is a difficult one. It means not being [solely, I would add today] satisfied with local organizing or theoretical work simply because it is safe. It means building an organization for class-wide struggle today.”

Like others around Radical America, we were influenced by the work of such non-orthodox Marxists as C.L.R James, James and Grace Boggs, and Martin Glaberman (the latter who once sent Mark and me into paroxysms of appreciative laughter when he defined “spontaneity,” a movement often upbraided as insufficient by Leninists, as “when someone else does the organizing”). But the lure of organizing workers under the direction of an organization centered on galvanizing blue-color workers who could take the fight to capital was too strong, and Mark left Boston for Detroit, where he soon was hired at the historic Dodge Main plant in Hamtramck, a Detroit suburb. I wouldn’t “industrialize” until 1977, five years after Mark, and into steel. We both lost jobs in the mass layoffs of the early ‘80s, but never regretted what the experience taught us. Neither of us joined another socialist organization until DSA. And long after it was formed in the early 1980s.

So what went wrong with the strategy of putting labor radicals, mainly former students, on the shop floor? It was the massive layoffs in heavy industry following the early 1980s economic crash. Mark’s terminal layoffs in auto and mine in steel put paid to our hopes. He became an economist of the first rank. After another stint as a graduate sociology student and picking up a journalism degree, I worked for unions as a staff writer. We both remained life-long critics of labor-management cooperation schemes and remained devotees of rank-and-file insurgencies. “Socialism from Below” was always our linchpin, a perspective currently articulated in the monthly Labor Notes, by numerous contributors to Jacobin and in left journals such as New Politics and Against the Current. The tricky part was and remains not so much affirming that vision as securing it, especially when capital starts the game with a winning hand and a dirty deal.

In late 2007, less than a year after taking his post as the Bloomberg administration’s director of poverty research for the city’s new Center for Economic Opportunity (CEO), Mark assumed responsibility for coordinating and writing up the Center’s efforts to track poverty in a way that measured the poverty rate fully and fairly. Interviewed in a Q & A about his work by City Limits, then as now one of New York’s savviest periodicals and web sites, the interview focused on how Levitan and his crew “track poverty and indicators of well-being among the CEO’s target populations,” and demonstrating how previous poverty estimates seriously understated both financial deprivation levels and misread the laggard range of public benefits. New measures of “poverty and well-being” were drastically called for.

As Mark told the interviewer, “If you conceive of poverty as being a measure of income adequacy, then there are two things you need to pay attention to. One is, what’s your definition of resources – what counts as income? Second, what’s the yardstick that you’re measuring income against? And we feel that the official measure is flawed in both respects.”

Mark and his team made history, rescaling poverty calculations and marking perhaps the only thing Bloomberg’s administration in three terms in office did right.

Readers may wonder what a labor radical with a doctorate in Marxian economics from the left-of-center economics department at the New School for Social Research could accomplish being posted in the neoliberal “stop and frisk,” rich-man Bloomberg administration. The answer is he succeeded brilliantly and did it graciously. The reform policies he advocated, which recalibrated poverty to the benefit of the poor, are city policy today.

On reflection, it would have been interesting if Mark had gone a step farther in writing the kind of participant-observer expose that would bring alive what it was like succeeding at doing good in a bureaucracy and for the likes of a Bloomberg, no less. Was it all without pitfalls and regrets? He can no longer tell us.

As I write, Mark’s family is doubtlessly busy with final preparations, and it may be an impertinence I think to ask them to fact check my memory, addled as it is by my own cluttered life. I haven’t seen his now grown son since he was a mischievous pre-teen. His wife Gay Semel, Mark’s 44-year-long partner, is another erstwhile comrade I would see only at the occasional DSA meeting in a New York City chapter broken into eight distinct branches claiming thousands of members. Add the coronavirus threat that made hunkering down at home required and seeing a dear friend in the flesh impossible. Now he is gone, and there really can only be closure in remembering the good times. And there were many good times.

So here is one old insurgent with a host of his own illnesses making sense of the loss of an old comrade of the revolutionary road who avoided Covid only to succumb to cancer, the great killer before which even the coronavirus pales.

No matter. Mark took his skills and put them to work for people who needed them most. The memory of Mark Levitan and his impact will always be for those who knew him as someone who was always “presente.” That presence is already missed.

Michael Hirsch is a New York-based labor and political writer and a New Politics editorial board member.  Hirsch also serves as a Portside moderator.

Please donate to New Politics to allow us to continue bringing you independent, sharp, and provocative political analysis.

You can make a tax-deductible contribution by clicking here.