The Fog of History Wars

History is politics by other means, and we who care about it have to fight this war better and more strategically ourselves. We need history that can get us marching but also render us awed by how much there is to learn. 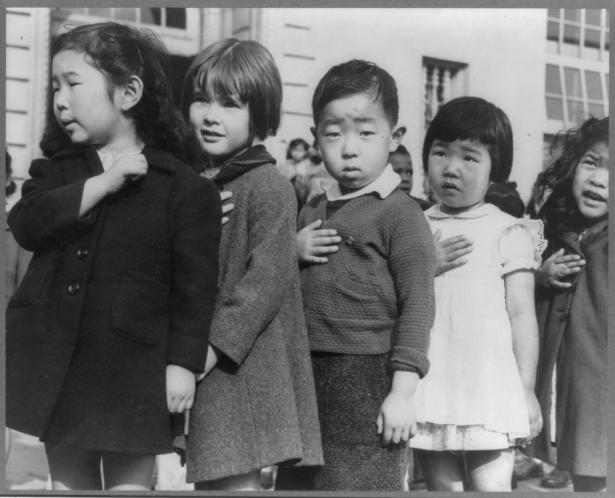 Pledge of Allegiance by Dorothea Lange, 1942,

Once again, Americans find themselves at war over their history—what it is, who owns it, how it should be interpreted and taught. In April, the Department of Education called for a renewed stress, in the classroom, on the “unbearable human costs of systemic racism” and the “consequences of slavery.” In response, Senate Minority Leader Mitch McConnell issued a formal letter, demanding more “patriotism” in history and calling the Democrats’ plan “divisive nonsense.” Like all great questions of national memory, the latest history war has to play out in politics, whether we like it or not. This is especially true as we limp, wounded, from the battlefields of the Trump era, when facts were nearly rendered irrelevant.

History wars follow patterns. The subjects at their core usually carry visceral meaning for large swaths of the public. The disputes quickly invoke curricula, creeping into school boards and state legislatures with increasing stakes. The combatants then employ a kind of existential rhetoric, with all sides declaring surrender unacceptable. Political teams are chosen, and the media both fuels and thrives on the contestation. Authorities, whether in academia, libraries, or museums, try to fight for up-to-date research and interpretation. The politics of knowledge and the emotional attachments to country threaten to sweep up nearly all before them. Finally, someone declares victory, whether by creating or removing a monument, cancelling or curating an exhibit, or writing a book about a triumph of historical engagement. “Good” history can be both a result and a casualty of these wars.

Some of these battles never quite end. (The endurance of the Lost Cause ideology, which argues that the South fought not for slavery but for sovereignty, is one example.) But the broader problem is that, in the realm of public history, no settled law governs. Should the discipline forge effective citizens? Should it be a source of patriotism? Should it thrive on analysis and argument, or be an art that emotionally moves us? Should it seek to understand a whole society, or be content to uncover that society’s myriad parts? The answer to all of these questions is essentially yes. But this is where the history wars, old and new, merely begin. We call them wars because they matter; nations have risen and fallen on the success of their stories.

Two recent history wars offer cautionary tales. One arrived in the mid-nineties, when a debate flared in the media over the National Standards for History. The Standards were a colossal project: the country’s first attempt at establishing a nationally recognized set of criteria for how history should be taught. Initially funded by the George H. W. Bush Administration, the venture took around three years and two million dollars to complete, and involved every relevant constituency, including parents, teachers, school administrators, curriculum specialists, librarians, educational organizations, and professional historians. Yet, when the Standards were published, in 1994, a big-tent effort transformed into a ferocious political fight. Many historians entered the public arena for the first time during this debate, and droves of us have never left.

Generally, historians were no match for the right-wing assault on the Standards, which one conservative think-tank writer likened to propaganda “developed in the councils of the Bolshevik and Nazi parties and successfully deployed on the youth of the Third Reich and the Soviet empire.” Lynne Cheney, then a fellow at the American Enterprise Institute, blasted the Standards in the Wall Street Journal as “politically correct” and full of “politicized history.” (A few years earlier, as the chair of the National Endowment for the Humanities, Cheney had granted five hundred and twenty-five thousand dollars to help fund the project.) Radio host Rush Limbaugh accused historians of depicting America as “inherently evil,” and contended that the Standards should be “flushed down the sewer of multiculturalism.” The media swarmed to get Cheney debating celebrated historians such as Joyce Appleby, Eric Foner, and Gary B. Nash, who was one of the Standards’ lead authors. Critics often complained that the criteria too frequently mentioned Harriet Tubman, at the cost of eliding figures such as George Washington.

If such critics had read the Standards carefully, they would have known that the suggestions were merely guidelines, and fully voluntary for school districts. But the Senate, caving in to vicious op-eds and conspiracy theories about cabals of liberal academic historians, voted to repudiate the project, claiming that it showed insufficient respect to American patriotic ideals. The debate left an important legacy. As Nash and his co-authors wrote in “History on Trial,” a 1997 book on the controversy, curricula are often mere “artifacts” of their time, and necessarily vulnerable to “prevailing political attitudes” and “competing versions of the collective memory.” Nations have histories, and someone must write and teach them, but the Standards remain a warning to all those who try.

A similar tension was at the heart of a controversy at the Smithsonian Air and Space Museum, which in 1993 began to plan an exhibit on the dropping of the atomic bomb. The show had especial significance to the American military community. As Edward Linenthal and Tom Engelhardt write in “History Wars: The Enola Gay and Other Battles for the American Past,” the stakes were no less than “how the premier achievement of American airpower—arguably the one instance in which strategic bombing, not an army invasion or a navy blockade, triumphantly ended a major war—would be treated at the most popular museum in the world.” Complicating this question was the duty, for historians and the museum, of interpreting the world’s only use of nuclear weapons on a civilian population. In the fifty years after Hiroshima and Nagasaki, President Truman’s decision to use the bomb had undergone several reconsiderations, based on new evidence, by scholars and by some generals of the Second World War.

For Martin Harwit, the Smithsonian’s director, the challenge was daunting: How should the United States, which won a two-front war against Fascism, reconcile its triumph with its legacy of mass destruction? The Air Force Association, along with several veterans’ groups and congresspeople, believed that the museum needed to show the enormous American sacrifice in the Pacific War, from the Battle of Midway to Guadalcanal. This “patriotic” approach argued for a focus on the crew of the Enola Gay, the aircraft that had dropped the bomb. Harwit, along with a council of advisers, spent several months writing and rewriting the exhibit’s script, aiming to appease both sides. Word emerged early that the exhibit would depict Japanese civilian death and suffering, including the horror of radiation.

The Air Force Association and its allies would have none of it. The museum continued to tweak its plans, hoping to satisfy the demands of veterans who insisted that this was their story; it ought not be “hijacked” by liberal historians. Complexity and nuance died in the rubble of a media storm. As Linenthal wrote, the “commemorative” and the “historical” voices could never be reconciled. Historians under pressure—Harwit included—began to resign from the project, and prominent senators and congressmen joined the military in its condemnations. The American right, for all its complaints about liberal bias, wins more than its share of these battles.

As for the exhibit, it ended up being a meagre affair. It displayed the fuselage of the Enola Gay, commemorated the crew, and honored the mechanics and technicians who restored the plane’s machinery. No broader story of the decision to drop the bomb appeared, nor was there any discussion of that decision’s long-term consequences. When I visited the exhibit shortly after it opened, in 1995, I sat in the anteroom and filled out several postcards of reaction, fuming that the fuller context of such an event could not be told in a democracy like the United States. Memory, in this case, was more powerful than history.

Today, as we allow ourselves to collapse once more into arguments about interpretive versus patriotic history, we should know that we have done this before. Like medical practice, history is revised generation after generation, driven by new evidence, fresh questions, and present-day imperatives. When Senator Tom Cotton calls the 1619 Project—the Times Magazine’s argument for reorienting the whole of American history around the thread of slavery—a form of “anti-American rot,” we should condemn both his ignorance and his politics. But hypocrisy is not merely a moral condition; it is a strategy.

History is politics by other means, and we who care about it have to fight this war better and more strategically ourselves. We will not win by constantly telling the public that they need to see all of American experience in a “reframing” of slavery and racism. We need to teach the history of slavery and racism every day, but not through a forest of white guilt, or by thrusting the idea of “white privilege” onto working-class people who have very little privilege. Instead, we need to tell more precise stories, stories that do not feed right-wing conspiracists a language that they are waiting to seize, remix, and inject back into the body politic as a poison. The Republicans, across the country, who wish to ban teaching about slavery merit all the condemnation we can muster. But moral hand-wringing will not suffice. Historians must write and speak up in the clearest language, in prose our grandmothers can read. We need history that can get us marching but also render us awed by how much there is to learn. Slavery, as personal experience and national trial, is a harrowing human tragedy, and like all great tragedies it leaves us chastened by knowledge, not locked within sin or redemption alone.

In his new book, “Last Best Hope: America in Crisis and Renewal,” the writer George Packer captures our dilemma. “America is neither a land of the free and home of the brave nor a bastion of white supremacy,” he writes. “Or rather, it is both, and other things as well. . . . Neither Sinful America nor Exceptional America, neither the 1619 Project nor the 1776 Report, tells a story that makes me want to take part. The first produces despair, the second complacency. Both are static narratives that leave no room for human agency, inspire no love to make the country better, provide no motive for getting to work.” We can debate whether Packer undervalues the 1619 approach, or whether he accounts for the sheer level of willful ignorance in the 1776 Commission report, Trump’s misadventure in “patriotic” history. But, as impossible as the politics of history may seem, a genuine democracy not only tolerates the reinterpretation of its past but thrives upon it.

David W. Blight is the Sterling Professor of History at Yale University and the author of Frederick Douglass: Prophet of Freedom.

Immerse yourself in the world of politics, business & technology, humor, or fiction with a subscription to The New Yorker.