June is Pride Month – a time set aside to honor the Stonewall uprising, which launched the movement to end discriminatory laws against LGBTQ people – and to remember the many important cultural and legislative victories since that pivotal 1969 summer 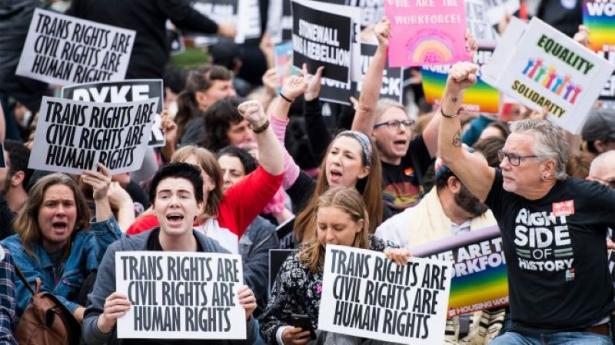 Protesters block the street in front of the Supreme Court in Washington, D.C., on Oct. 8, 2019, as the court hears arguments on whether gay and transgender people are covered by a federal law barring employment discrimination on the basis of sex., Bill Clark // CQ-Roll Call // Southern Poverty Law Center

This year, the celebration occurs under the cloud of more than 125 anti-LGBTQ bills that have been introduced in state legislatures, many targeting children who identify as transgender by denying them access to lifesaving medical treatment, banning them from participating in sports or using the restroom. This is up markedly from last year when more than 40 such bills were introduced.

In fact, 2021 has set a record for the number of anti-trans legislative efforts.

It’s important to understand that the bulk of these laws are copycat bills developed and pushed by known anti-LGBTQ hate groups rather than legitimate need or public concern. These usual suspects have played a role in previous anti-equality fights, like North Carolina’s 2016 “bathroom bill,” a failed effort The Associated Press said could cost the state $3.76 billion over 10 years.

Idaho’s HB 500, the first anti-transgender sports bill to be passed through any state’s legislative chamber and be signed into law in 2020, targets children and was written by the Alliance Defending Freedom (ADF), which the Southern Poverty Law Center has designated as an anti-LGBTQ hate group. Already this year, Alabama, Arkansas, Florida, Mississippi, Montana and Tennessee have enacted similar laws, with more expected to follow before the end of the legislative season. And Arkansas has become the first state ever to enact a ban on medical treatments for transgender youth, a law also pushed by ADF.

The SPLC designated ADF as a hate group after its support of recriminalizing consensual sex between LGBTQ adults and its defense of state-sanctioned sterilization of trans people.

These efforts also go hard against public opinion: Two-thirds of Americans oppose these types of bills, according to a recent PBS NewsHour/NPR/Marist College survey. But after the Supreme Court struck down marriage equality bans in 2015, these groups turned to separating the “T” from LGBTQ in hopes of solidifying their base and entrenching hate against a lesser-known and less understood group.

Tragically, it’s a tactic that’s feeding violence against transgender people. According to the Human Rights Campaign, last year was the deadliest on record – at least 44 transgender and gender non-conforming people were violently killed. Black transgender women continue to be disproportionately affected by lethal violence.

Amid such ignorance and hatred, it is all the more important to celebrate Pride Month by embracing and uplifting our transgender and nonbinary community members. Here are a few suggestions for celebrating Pride Month and supporting the ongoing fight for LGBTQ rights: