The workers laboring outside in this extraordinary heat are on the front lines of the climate crisis. 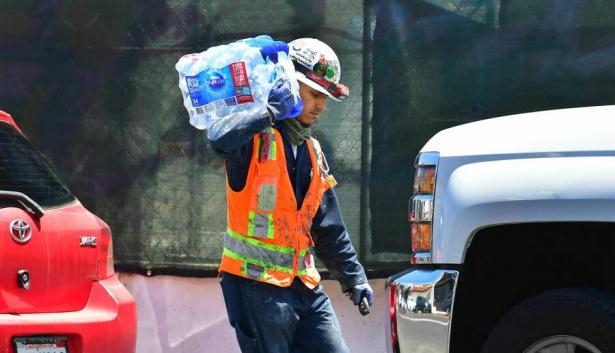 A construction worker carries a 24-pack of bottled water over his shoulder on June 14, 2021 in Los Angeles, ahead of an early season heat wave.,Frederic J. Brown AFP via Getty Images

The end of June saw temperatures soar all around the United States, with historic heatwaves in the Pacific Northwest and excessive heat advisories, watches and warnings elsewhere. The heat is not just uncomfortable, it’s deadly, buckling roads and melting bridges, with temperatures climbing over 120 degrees in Death Valley, California and British Columbia.

While the 100 million computer workers in this country are more likely to be able to work safely indoors, other urgent and necessary work must continue outdoors, no matter the severity of the weather. The entirety of the working class is (or will be) affected by climate change, but it’s farm workers, letter carriers, construction workers, sanitation workers and other outdoor workers who are unable to escape to air conditioning, and are on the front lines of the environmental crisis. This clarifies the fight against climate change as one not just for environmentalists: Rising temperatures are a workplace safety issue. Relatedly, there is growing awareness among climate activists that workers’ rights and the future of the climate are inextricably linked. Continuing to connect these two existential issues is our best shot at a livable world in which we can all work safely and with dignity.

Between 1992 and 2017, at least 815 workers in the U.S. were killed and more than 70,000 were injured from heat stress injuries. It’s likely that the true number of workers hurt or killed due to extreme heat is much higher than reported to the Occupational Safety and Health Administration (OSHA). Many workers who labor outside — particularly agricultural workers and construction workers — are undocumented or otherwise vulnerable and precarious, and may not know to report illnesses to OSHA. And of course, their employers are likely to misclassify a heat-related death. As temperatures continue to rise year after year, we can guess that the number of heat stress injuries and deaths will rise too.

On June 29, the United Farm Workers (UFW) slammed reports of heat-wave-related illnesses and deaths as ​“entirely preventable,” called on Washington Gov. Jay Inslee and Oregon Gov. Kate Brown to protect farm workers by issuing emergency heat standards. (At least 63 people have died in Washington and Oregon since the heatwave began.) Even in perfect weather, farm workers do physically demanding labor for very low wages and no benefits. And according to Centers for Disease Control data from 2008, farmworkers already were perishing from heat at a rate of 20 times other civilian workers. Now temperatures have climbed to well over 100 degrees in the Pacific Northwest, and a farmworker in Oregon was killed by the heat on June 26. UFW rightly calls heat protections for workers ​“a matter of life and death.”

And while farm workers may be among those most vulnerable to the effects of climate change, they are not the only workers organizing for safety in our changing environment. After a member of the Communications Workers of America (CWA) died after installing phone service for a customer in 100 degree heat in 2011, the union began negotiating over heat stress workplace standards. An International Union of Painters and Allied Trades local that represents political, nonprofit and campaign workers in the Pacific Northwest fought for heat and smoke safety to protect canvassers in their most recent collective bargaining agreement, which was signed in January 2021 after successive smoky summers due to multiple wildfires.

Even those who work primarily inside have started organizing around these issues. Library workers in New York City bargained for a clause in their 2015 to 2020 contract entitled ​“operation of the library in the event of extreme temperatures,” requiring a temperature and humidity indicator on each level of the buildings, and compensatory time for staff who continue working in weather above 85 degrees and 44 percent humidity.

As buildings get older with no federal investment to retrofit them, and as summers get hotter and hotter, there will be more pressure on electrical grids, potentially resulting in power outages. We can expect that even computer workers will be expected to work without air conditioning and in dangerous conditions. Amazon, run by the richest man in the world, forced warehouse workers in Washington to work in near-90-degree heat, because the company wasn’t equipped to deal with the current heat wave. (This is not the first time Amazon has allowed their workers to suffer in the heat—multiple workers have collapsed from heat-related causes.)

Democrats in the House and Senate have introduced legislation to require OSHA to create and enforce standards to protect workers in extreme temperatures. (Currently OSHA has no specific standards around working in high-heat environments.) The legislation, entitled the Asunción Valdivia Heat Illness and Fatality Prevention Act, is named for a 53-year-old farmworker who died after picking grapes for 10 hours straight in 105 degree heat in 2004. The act will require OSHA to establish measures like paid breaks in cool areas, access to water, limitations on time in the heat, and emergency response for illnesses caused by the heat. It will also ask that employers provide training for employees on how to recognize the potential risk factors of working in extreme heat, and ways to respond to symptoms if and when they arise.

While this legislation is important and timely, most workers in this country lack the true ability to safely advocate for themselves in the workplace. Thanks to our backwards labor laws, union density hovers around 11% nationwide, even though unions’ approval ratings are in the clear majority. If workers want to be in charge of their own health and safety, it’s imperative that we pass the Protecting the Right to Organize (PRO) Act, which will allow workers the ability to unionize without fear of retaliation. (Disclosure: This author has been involved in organizing to pass the PRO Act.) Unionized workplaces are safer than non-union workplaces: They are 30% more likely to face an inspection for a health and safety violation, because union members are more likely to know their rights and have the ability to fight for them. (Unionized workplaces are also much more likely to have health and safety committees, which exist for the sole purpose of ensuring the workplace is safe.) And of course, unions are why we even have OSHA, thanks to the leadership of beloved and dearly remembered labor leader Tony Mazzocchi.

Environmentalists, long seen as either opposed to workers or just apathetic to their plight, have begun to realize that without a strong working-class movement, there’s no real hope of fighting climate change. And with Biden’s deeply disappointing infrastructure legislation, we’re going to need a base of millions to push for a much more aggressive plan to fight climate change. That’s why the Green New Deal Campaign Committee of the Democratic Socialists of America went all in on pushing for the passage of the PRO Act. Unions don’t just protect members’ health and safety in the workplace, they have the ability to turn regular people into political actors with the skills and tools to fight for a dignified life both on and off the job. As workers feel the growing effects of climate change at work and at home, they’ll need to fight their employers for health and safety protections, and they’ll also need to go to battle with the politicians and fossil fuel executives who have allowed temperatures to rise so drastically.