The Empire Strikes Back at the Left in Buffalo and Cleveland

Today, the second-largest cities in New York and Ohio are battlegrounds between activists fighting for progressive change and establishment forces determined to prevent it.

July 4, 2021 Norman Solomon CounterPunch
Printer friendly
The Empire Strikes Back at the Left in Buffalo and Cleveland Published July 4, 2021 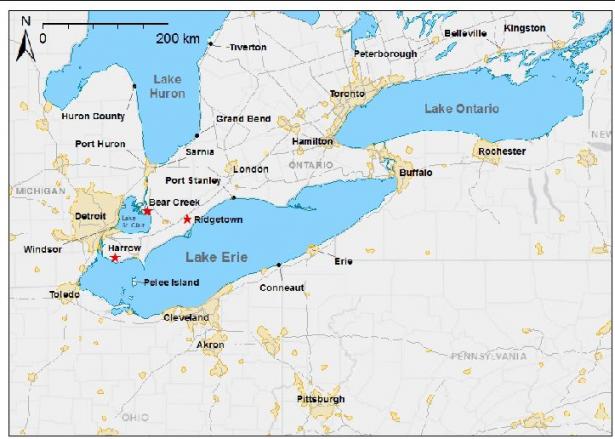 The two biggest cities on the shores of Lake Erie are now centers of political upheaval,

The two biggest cities on the shores of Lake Erie are now centers of political upheaval. For decades, Buffalo and Cleveland have suffered from widespread poverty and despair in the midst of urban decay. Today, the second-largest cities in New York and Ohio are battlegrounds between activists fighting for progressive change and establishment forces determined to prevent it.

For Buffalo’s entrenched leaders, a shocking crisis arrived out of the blue on June 22 when socialist India Walton won the Democratic primary for mayor, handily defeating a 15-year incumbent with a deplorable track record. “I am a coalition builder,” Walton said in her victory speech that night. But for the city’s power brokers, she was a sudden disaster.

“This is organizing,” Walton said as rejoicing supporters cheered. “When we organize, we win. Today is only the beginning. From the very start, I said this is not about making India Walton mayor of Buffalo — this is about building the infrastructure to challenge every damn seat. I’m talking about committee seats, school board, county council. All that we are doing in this moment is claiming what is rightfully ours. We are the workers. We do the work. And we deserve a government that works with and for us.”

To the people running City Hall, the 38-year-old victor seemed to come out of nowhere. Actually, she had come out of grassroots activism and a campaign that focused on key issues like “food access,” “pandemic recovery,” education, climate, housing and public safety. And for corporate elites accustomed to having their hands on Buffalo’s levers of power, there would not be a GOP fallback. Mayor Byron Brown had appeared to be such a shoo-in for a fifth term that no Republican bothered to run, so India Walton will be the only name on the November ballot.

Alarm sirens went off immediately after election night. The loudest and most prominent came from wealthy (net worth $150 million) real-estate developer Carl Paladino, a strident Trump supporter and former Republican nominee for governor, who became notorious in 2016 for racist public comments about Michelle and Barack Obama. Walton’s victory incensed Paladino, who made it clear that he vastly preferred the black incumbent to the black challenger. “I will do everything I can to destroy her candidacy,” Paladino said, and he urged fellow business leaders in Buffalo to unite behind Brown as a write-in candidate.

In tacit alliance with Paladino while keeping him at arm’s-length, Brown announced on Monday evening that he will mount a write-in campaign to stay in the mayor’s office. Brown cited among his mayoral achievements “the fact that the tax rate in Buffalo is the lowest it’s been in over 25 years.” Then he began scaremongering.

Such attacks, with McCarthyite echoes of Trumpism, are likely to be at the core of Brown’s strategy for winning the general election. But he’ll be in conflict with the formal apparatus of his party in Buffalo. After the write-in campaign announcement, the chair of the Erie County Democratic Party issued an unequivocal statement about India Walton, “to strongly affirm once again that we are with her, now and through the general election in the fall.” It added: “Last Tuesday, India proved she has the message and the means to move and inspire the people of Buffalo. It was a historic moment in Western New York politics. The voters heard her message and embraced her vision for the city’s future, and we look forward to working with her and her team to cross that final finish line on November 2.”

Two hundred miles away, in northeast Ohio, the clash between progressives and corporatists has been escalating for several months, ever since Rep. Marcia Fudge left a congressional seat vacant when she became President Biden’s HUD secretary. Early voting begins next week, and the district is so heavily Democratic that the winner of the Aug. 3 primary is virtually certain to fill the vacancy this fall.

On Tuesday, the No. 3 Democrat in the House, Rep. Jim Clyburn, went out of his way to be emphatic that he doesn’t want the frontrunner in the race, progressive stalwart Nina Turner, to become a colleague in Congress. Though nominally endorsing Turner’s main opponent, Shontel Brown, the clear underlying message was: Stop Turner.

Clyburn went beyond just making an endorsement. He provided some barbed innuendos via an interview with the New York Times, which reported comments that say something about Clyburn’s self-concept but nothing really about Turner. “What I try to do is demonstrate by precept and example how we are to proceed as a party,” he said. “When I spoke out against sloganeering, like ‘Burn, baby, burn’ in the 1960s and ‘defund the police,’ which I think is cutting the throats of the party, I know exactly where my constituents are. They are against that, and I’m against that.”

In fact, Democrats are overwhelmingly in favor of programs being championed by Turner, none more notably than Medicare for All, a proposal that Clyburn and many of his big funders have worked so hard to block. “Clyburn has vacuumed in more than $1 million from donors in the pharmaceutical industry — and he previously made headlines vilifying Medicare for All during the 2020 presidential primary,” the Daily Poster pointed out on Wednesday.

The corporate money behind Clyburn is of a piece with the forces arrayed against Turner. What she calls “the commodification of health care” is a major reason.

In mid-June, Turner “launched her television spot entitled ‘Worry,’ in which she talks about how her family’s struggle to pay health care bills led her to support Medicare for All,” the Daily Poster reported. “The very next day, corporate lobbyists held a Washington fundraiser for Turner’s primary opponent, Shontel Brown. Among those headlining the fundraiser was Jerome Murray — a registered lobbyist for the Pharmaceutical Researchers and Manufacturers Association, which has been backing a nationwide campaign to reduce support for Medicare for All.”

Whether Clyburn’s endorsement will have significant impact on the voting is hard to say, but it signaled that high-ranking Democrats are more determined than ever to keep Turner out of Congress if they possibly can. His move came two weeks after Hillary Clinton endorsed Brown, who has also received endorsements from the chair of the Congressional Black Caucus, Rep. Joyce Beatty, and the chief deputy whip of House Democrats, Rep. Pete Aguilar. On the other hand, a dozen progressive members of the House have endorsed Turner, including Alexandria Ocasio-Cortez, Ro Khanna, Rashida Tlaib and Jamaal Bowman, as well as Sen. Bernie Sanders.

Carmen Yulín Cruz, the former mayor of San Juan, Puerto Rico — who, like Nina Turner, was a national co-chair of the Sanders 2020 presidential campaign — is a strong supporter of Turner for Congress. This week, summing up the fierce opposition from power brokers who want to prevent a Turner victory, Cruz used words that equally apply to the powerful interests trying to prevent India Walton from becoming the next mayor of Buffalo: “They’re afraid of a politician that can’t be bought.”

Norman Solomon is executive director of the Institute for Public Accuracy, where he coordinates ExposeFacts. Solomon is a co-founder of RootsAction.org.

CounterPunch’s mission is to help readers make informed assessments – vital for a healthy, democratic society – on the public issues of the day.  We do this by publishing alternative, left-leaning reporting, commentary, and essays that you won’t find in the mainstream press. We also carry out our mission by publishing non-fiction books.