This is a sensitive portrait of the American civilian who was executed for allegedly passing atomic secrets to the Soviet Union. There are striking similarities between the poisonous atmosphere of the cold war and that of contemporary politics... 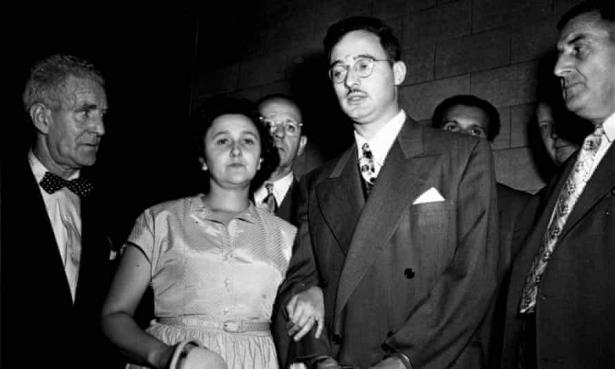 Ethel and Julius Rosenberg during their trial for espionage in New York.,Photograph: AP // The Guardian

The case of Ethel and Julius Rosenberg, the young Jewish American couple executed in June 1953 at the height of the cold war for allegedly passing atomic secrets to the Russians, has weighed heavily on the US political and cultural conscience for 70 years. They were the first civilians to be charged and put to death for conspiracy to commit espionage in peacetime, and the case has long been judged, including by many of those on the political right, as the US’s ugliest mistake of the cold war.

Meanwhile, fiction has made rich play with the strange truths and metaphors of the stories swirling around this “stubbornly mundane” couple. Sylvia Plath’s The Bell Jar famously opens with the line: “It was a queer, sultry summer, the summer they electrocuted the Rosenbergs …’’ But it is EL Doctorow’s The Book of Daniel, published in 1971, told from the perspective of the clever, restive elder son of the slain couple (the Isaacsons in the novel) that still stands as the most inventive evocation of the story’s deeper political meanings and human consequences. Anne Sebba was first introduced to the tragedy by Doctorow’s “highly fictionalised but desperately dramatic version of events”, a “pocket sized paperback” that she devoured when she was a young mother living in New York in the 1970s. She became fascinated by “what can happen when fear, a forceful and blunt weapon in the hands of authority, turns to hysteria and justice is wilfully ignored”.

The case continues to polarise opinion to this day, and reading this book it is only too easy to see why. There are striking similarities between the poisonous atmosphere of the cold war and that of contemporary politics, and particularly Trump’s America: the official lies, the raw misogyny, the hounding of the radical left and racial and ethnic minority people, the disregard for, and twisting of, the legal process, the cowardice of so many moderate, mainstream politicians. (Neither Truman nor Eisenhower found the courage to defy press and public hysteria around the case and commute the death sentences of the Rosenbergs.) The case is littered with reprehensible characters, from J Edgar Hoover to Roy Cohn, who at 23 was the junior lawyer on the prosecution team, rising to prominence as chief counsel on the Army-McCarthy hearings in 1954 and later lawyer to, and general fixer for, the young Donald Trump. Cohn, who died in 1986, is now widely reviled as a corrupt bully, a man who despite being gay and Jewish persecuted both gay people and Jews throughout his career. During an early crisis in his presidency, Trump is reported to have bellowed: “Where is my Roy Cohn?”

At the time of the case, many believed that both the Rosenbergs were innocent of all the charges against them. Then the 1995 release of decoded transcripts of messages between Soviet handlers and their US recruits – the Venona project – confirmed that Julius, an engineer in a strategic army laboratory, did pass secrets during the war, although arguments still rage about the significance of the material he secured for the Russians. The case against Ethel remains, in Sebba’s words, “ambiguous”. Venona provided no conclusive evidence that she worked for the KGB; she had no code name, for example, although, as Sebba recognises, she may have known about aspects of her husband’s work and approved of his motives. Neither is a capital offence in a democracy in which action alone is legally punishable, and freedom of thought is protected. Instead, Ethel was primarily convicted on the false testimony of her younger brother David Greenglass, a spy working at Los Alamos where the atomic bomb was being made, who was spared the death penalty by turning on his sister and brother-in-law. Greenglass, who served nine and a half years, while his wife was never charged, later confessed that he had lied to the trial when he said he witnessed his sister typing up secret information for Julius to transmit. In 2016, the Rosenbergs’ late middle aged sons – unsuccessfully – petitioned the outgoing President Obama to exonerate their mother.

Those who choose to judge this biography as the product of a writer gone soft on totalitarianism or espionage fail to grasp its true heart. Sebba makes clear her own distaste for communism, and her explicit mission is human rather than political: it is to “extrapolate” Ethel the woman from the whole notorious, sordid story. In doing so, she brings us a woman, rather like Plath’s heroine, suffocated by the “madness that incarcerated so many women in different ways in the early 1950s”.

Ethel Greenglass was born in 1915, the only girl of a poor, Lower East Side Jewish family. Her mother, Tessie, was “a bitter woman whose affection such as it was all went to the boys in the family”, and her father too weak in character to stand up for his clever and artistic daughter. The determined young Ethel did well at school despite numerous obstacles – at 13 she was diagnosed with scoliosis (curvature of the spine) – and single-mindedly developed her passion for opera singing and acting. Working as a clerk in a shipping company, a still timid young Ethel took the lead in a 1935 strike against poor wages and working conditions, and became increasingly drawn to the small but growing world of US communism. Her politics deepened after she met the handsome young Julius Rosenberg, three years her junior, with whom there was an immediate and powerful sexual bond.

For its adherents, communism was an entire social as well as ideological world, but Sebba usefully reminds us how official US attitudes to the Soviet Union dramatically oscillated over a relatively short period. Reviled for the 1939-41 Soviet-Nazi pact, Stalin’s Russia was embraced as a heroic, sacrificial partner from 1941 to 1945, only for the US to become paranoid about the possibility of the Soviet Union developing its own atomic weapons, particularly after the onset of the Korean war in 1950. This was the political context that drove the hysteria of the Rosenberg case.

Ethel’s true preoccupations during the war years were not political but personal. Motherhood triggered within her a parallel and intense psychic life. She longed to be a good mother to her sons – Michael, born in 1943, and Robbie, born in 1947 – enrolling in parenting classes at New York’s avant-garde New School. Always seriously short of money, the couple scraped together enough for Ethel to see a child psychotherapist and then a psychiatrist, Saul Miller, who visited her in prison, and with whom she fell into a deep and despairingly dependent love. Right up to the last weeks of her life, Ethel fought for an inner freedom from the consequences of the corrosive neglect of her birth family, and to confirm a sense of her own intrinsic, human value.

Ethel’s backstory makes her apparent strength in the face of intense official and public pressure all the more striking. The Rosenbergs’ trial in 1950 for conspiracy to commit espionage was a travesty of justice. The judge colluded with a malign prosecution to paint her as a “fully fledged partner” in acts of espionage and to undermine her legitimate use of the fifth amendment. She refused to inform on her husband or to renounce her political beliefs. It did not help her either, Sebba observes, that she remained stony faced and shabbily dressed throughout the trial.

Ethel stayed faithful to the things she believed and to the people she loved, whatever the consequences

After their conviction there was growing public pressure to commute the Rosenbergs’ death sentences, but it was not enough to save them. While Julius retained a naive belief in official clemency right to the end, Ethel was convinced that they would die, and worked to protect her children as much as she could in the face of their parents’ imminent, and terrible, fate. Her final letters to her children, and third-party accounts of their last prison visits, are heartbreaking. “Showing her sons dignity, confidence and courage in the face of adversity was Ethel’s mantra and the source of what little strength she retained by the end.”

Sebba has dug deep beneath this famous and archetypically male story of spying, weapons and international tensions to give us an intelligent, sensitive and absorbing account of the short, tragic life of a woman made remarkable by circumstance. Betrayed by so many in her own life – from her mother, to her brother, to her country – the most important thing was that she stay faithful to the things she believed and to the people she loved, whatever the consequences. In holding to this fateful path, she emerges as a stubbornly courageous figure, a woman who towers above the parade of morally grubby, self-seeking and misogynistic figures who conspired to destroy her.

[Melissa Benn is a founder of the Local Schools Network. Her latest book is Life Lessons: The Case for a National Education Service]