Brazilians Take to Streets to Demand Removal of Jair Bolsonaro 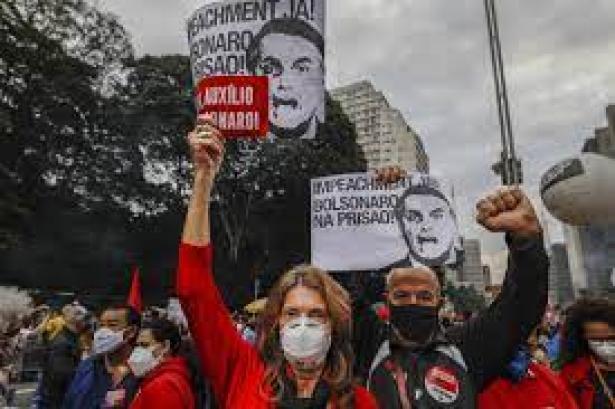 Huge crowds of protesters have returned to the streets of Brazil’s biggest cities to demand the removal of a president they blame for more than half a million coronavirus deaths.

Tens of thousands of demonstrators hit the streets of Rio de Janeiro on Saturday morning as calls for Jair Bolsonaro’s impeachment intensified after allegations that members of his government had sought to illegally profit from the purchase of Covid vaccines.

“The people have awoken,” said Benedita da Silva, a 79-year-old congresswoman and veteran of the Brazilian left, as she joined the rally.

“I’m here because we absolutely have to get this monster out of power and reclaim Brazil,” said Magda Souza, a 64-year-old dissenter, as she marched through downtown Rio with her husband, José Baptisa. “We’re surrounded by barbarism,” Souza added as a police helicopter circled over the throng.

Souza wore a bright red T-shirt calling for the return of Bolsonaro’s leftwing antagonist, the former president Luiz Inácio Lula da Silva, who recently stormed back on the political scene after his political rights were restored and is expected to run for the presidency next year. But many at the demonstration said they were not members of Brazil’s left and simply wanted rid of a far-right leader they accused of condemning thousands of their fellow citizens to death with his chaotic – and some now suspect corrupt – response to coronavirus.

On Friday, a supreme court judge ordered an investigation into whether Bolsonaro had failed to act after being alerted to suspicions of high-level corruption involving the procurement of millions of Covid vaccines from the Indian pharmaceutical company Bharat Biotech. According to the official count, more than 522,000 Brazilians have lost their lives to coronavirus, second only to the US , with the South American country’s epidemic still far from being controlled.

Patricia Ribeiro, a 47-year-old registrar, said she had never attended a street protest before this, but had come to pay tribute to her brother, Pedro Ribeiro, who died in March after catching Covid and spending eight days on a ventilator.

“I blame the government for my brother’s death,” she said. “They behave as if our lives are worth nothing, as if human life was worthless.”

“He had so many dreams,” Ribeiro added of her brother, a singlefather who was about to graduate from university and leaves two orphaned children.

Daniel Melo, an 18-year-old student, came to remember his 86-year-old grandmother, Conceição, who also died of Covid. “She went to hospital and never came home,” Melo said, adding that he blamed Brazil’s “genocidal” president for failing to alert citizens to the dangers of coronavirus – a disease Bolsonaro has dismissed as a “little flu”.

“He wanted to kill everyone,” Melo claimed.

Many protesters waved Brazil’s yellow and green flag – a symbol used by Jair Bolsonaro’s far-right movement – in an effort to reclaim the flag from his followers.

“It isn’t their flag, it’s the Brazilian flag and we are Brazilians. Brazil belongs to all of us. We are the children of this nation. We are patriots, just as they claim to be,” said André da Silva, a leftist activist from a social group called Movimento Favela Ação who was among those carrying the Brazilian flag.

Paulo Betti, a celebrated actor and director, was another who came clutching Brazil’s green and yellow jack. “We’re here to honour the dead and to declare: ‘We are alive!’” the 68-year-old said, attacking Bolsonaro’s assault on the Brazilian Amazon.

“We cannot allow this destruction to continue,” said Sílvia Buarque, awell-known actor who said Bolsonaro needed to be immediately removed from office. “This pandemic has convinced me that we cannot wait to vote him out [in 2022].”

Anti-Bolsonaro protests were reported to have taken place in many of Brazil’s most important cities, including Belém, Recife, São Paulo and Brasília, as well as European cities including London, Barcelona and Dublin.

“The primary objective is to bring down Bolsonaro,” said Maurício Machado, a 43-year-old waiter who came to the Rio rally wearing a face shield inscribed with the words: “Genocidal Bolsonaro. Biological threat.”

Guilherme Boulos, a prominent leftist and one of the organisers of the São Paulo rally, said the Covid corruption allegations had added to already profound public anger aganist Bolsonaro. “For the first time I think impeachment is a real possibility,” Boulos said, celebrating the fact that rightwingers were now joining the protest movement.

Political observers are skeptical about Bolsonaro’s imminent demise, pointing to the opposition of Arthur Lira, the president of Brazil’s lower house, to impeachment. Lira would need to approve the start of impeachment proceedings and at Saturday’s demos, the politician – who is a member of the powerful political bloc propping up Bolsonaro – found himself in protesters’ crosshairs. “Arthur Lira: an accomplice to genocide,” read one banner.