"No Senate rule supersedes people's constitutional rights," said the Democratic senator from Georgia. And shame on us if we're more committed to a Senate rule than we are to the principles of democracy," Senator Raphael Warnock added.

Sen. Raphael Warnock (D-Ga.) speaks to reporters after a meeting with members of the Texas House Democratic Caucus at the U.S. Capitol July 14, 2021 in Washington, D.C.,

Senator Raphael Warnock of Georgia applauded Texas Democrats on Wednesday for leaving their state in an effort to thwart a GOP attack on the franchise and said federal lawmakers must make the exodus worthwhile by passing robust voting rights legislation—even if it means overhauling Senate rules to do so.

"Voting rights is not just a political issue, this is a moral issue. Because the vote, in essence, is really about your voice—and your voice is about your humanity," Warnock told reporters after meeting with Texas state Democrats who traveled to D.C. to demand action from members of Congress.

"I want to thank these Texas legislators for coming up, because in a real sense they are fighting for our humanity," continued the Democrat from Georgia, where Republicans recently passed a sweeping voter suppression bill. "They're trying to make sure that the voices of the people are not squeezed out of their own democracy... So I submit that failure is not an option. We have to pass voting rights no matter what. We have to pass voting rights this Congress. No Senate rule supersedes people's constitutional rights."

Last month, Senate Republicans deployed the chamber's archaic filibuster rule to block debate on the For the People Act, a sweeping and popular bill that would expand ballot access and stymie the hundreds of Republican-authored voter suppression bills advancing in state legislatures across the country. In its current form, the filibuster effectively requires 60 votes for most bills to pass the Senate.

In an interview with Axios on Wednesday, Warnock said that "voting rights is bigger than the filibuster."

"And shame on us if we're more committed to a Senate rule than we are to the principles of democracy," he added. 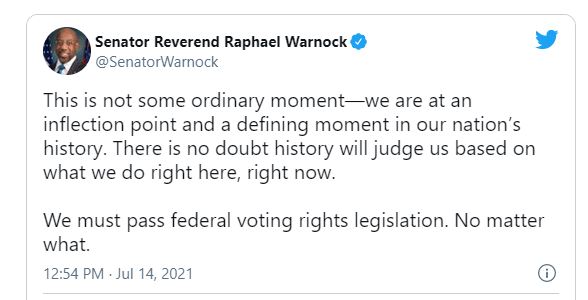 On Monday, Democrats in the Texas state House left town in a coordinated attempt to stop their Republican counterparts from passing legislation that would further restrict ballot access by imposing new voter ID requirements and banning drive-through voting sites, among a slew of other changes.

The Democratic lawmakers hope to remain out of Texas until the state's special legislative session expires in less than a month, which would further delay passage of the GOP's voter suppression bill.

In an effort to call attention to the importance of national election reforms to counter GOP attacks on voting rights at the state level, many of the Texas Democrats traveled to the nation's capital to hold public events and meet with key senators to discuss the issue.

"Our commitment in the House Democratic Caucus is that we’re going to stay out [of Texas] until the session is over to kill this bill," Texas House Democratic Caucus Chair Chris Turner (D-101) said during a press conference Wednesday. "And we're going to use the intervening time to shine a harsh national spotlight on the Republicans' voter suppression efforts, and use that pressure to encourage and urge and implore Congress, and specifically the U.S. Senate, to pass the For the People Act and the John Lewis Voting Rights Act."

But as the Washington Post reported, a meeting with Senate Majority Leader Chuck Schumer (D-N.Y.) earlier this week left some of the Texas Democrats "pessimistic about whether their foray to Washington will make a difference."

Texas state Rep. Senfronia Thompson (D-141) told the Post that neither Schumer nor other members of Congress made any new promises to overcome Republican obstruction and advance a federal voting rights bill.

Earlier this week, President Joe Biden delivered a speech pillorying state-level Republicans for their assault on the right to vote—"Have you no shame?" he asked—and promising to fight "vigorously" to protect ballot access nationwide.

But Biden did not mention the legislative filibuster, which can be weakened or repealed with a simple-majority vote. Several Democratic senators, most prominently Sens. Joe Manchin (D-W.Va.) and Kyrsten Sinema (D-Ariz.), have said they would not vote to change the filibuster rule, and Biden has not publicly pressured them to reverse their position for the sake of approving voting rights legislation.

With state-level redistricting set to get underway throughout the country, progressive advocacy groups are warning that the window for federal action on voting rights is rapidly closing. As The Intercept reported earlier this year, Republicans are looking to "gerrymander their way back to the majority," a ploy that could succeed without Senate passage of the For the People Act, which would curtail partisan gerrymandering. The U.S. House passed the bill in March without a single Republican vote.

"The time to act is now—before gerrymandered congressional districts are drawn, effectively disenfranchising millions of Americans," Progressive Democrats of America said in a statement on Tuesday. "With bold decisive action, we can defeat the right-wing assault on democracy."