labor Workers Are Being Crushed by Governors’ Unemployment Benefit Shutoffs

Republicans are cutting off unemployment benefits at a time when huge numbers of workers still desperately need them — and the Democrats aren’t putting up a fight over it. 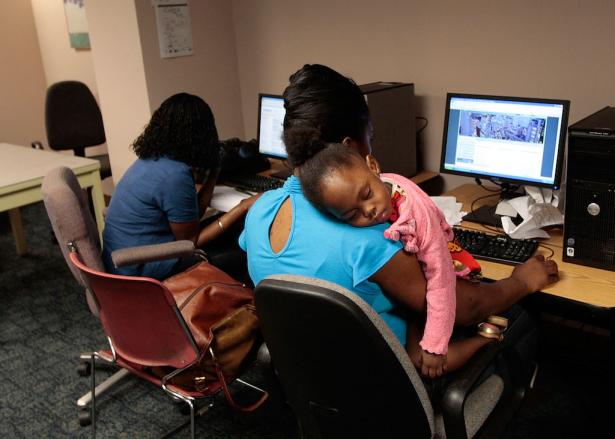 Many Americans have reported being unable to return to work due to childcare needs or health problems. , Chris Hondros / Getty Images

The federal government’s unemployment assistance program became a “lifeline” for Susan Hardy when the pandemic made it impossible to find work as an oil and gas title researcher, a job she held as a contractor. Hardy, seventy-one, has six grandchildren living with her and relied on the $724 a week she received in benefits to take care of them and support her son, who was denied unemployment benefits.

At least, she relied on the money until West Virginia governor Jim Justice (R) announced that beginning on June 19, the state would end its participation in federal unemployment programs enacted during the pandemic to encourage people to go back to work. As an independent contractor, Hardy was receiving Pandemic Unemployment Assistance (PUA), a federal program created last March as part of the Coronavirus Aid, Relief and Economic Security (CARES) Act to provide unemployment insurance for workers like Hardy, who don’t normally qualify for jobless aid.

Now, Hardy is at a loss. “If I needed $10 worth of gas right now, I can’t get it,” she said, adding that she has also maxed out her credit cards. “I used all the savings that I had just to maintain the household.”

Hardy is one of more than four million people who stopped receiving pandemic-related jobless aid during the past two months due to decisions by twenty-five Republican governors and one of their Democratic counterparts.

The governors said they ended the supplemental benefit programs to help businesses struggling to find workers as more companies fully reopened from the pandemic.

“West Virginians have access to thousands of jobs right now,” Justice said when he announced the cut-off. “We need everyone back to work. Our small businesses and West Virginia’s economy depend on it.”

Hardy was one of many workers who wrote to Justice’s office and asked him to reconsider his decision to end the benefits early. The Daily Poster obtained over two dozen such emails via public records request. According to these appeals, the pandemic-related unemployment benefits weren’t simply a reason for people to avoid going to work. Instead, the aid was the only thing keeping them afloat during unprecedented times — and cutting off that support was simply punishing.

“With me caring for six grandchildren, plus my age, I can’t go out and work at McDonald’s, or another restaurant, or in a warehouse,” Hardy said in an interview with the Daily Poster.

As she put it in her email to the governor’s office, “This unemployment is our lifeline.” She said she never received a response.

While President Joe Biden allowed governors to cut off benefits without putting up any fight, workers have now won lawsuits to block the unemployment cut-offs in two states and are suing in several more. AFL-CIO chief economist William Spriggs wrote last week that the Biden Labor Department “should have been a party to defend workers” in the lawsuits.

The war on jobless aid began on May 4, when Montana governor Greg Gianforte (R) announced that the state would cut off federal unemployment benefits at the end of June.

“Montana is open for business again, but I hear from too many employers throughout our state who can’t find workers,” Gianforte said in a statement announcing the end to the benefits. “Nearly every sector in our economy faces a labor shortage.”

The governor’s announcement catalyzed a movement among GOP governors across the country, who similarly declared their authority to prevent their residents from receiving benefits under the various federal COVID-related unemployment programs established by Congress last year.

“This labor shortage is being created in large part by the supplemental unemployment payments that the federal government provides claimants on top of their state unemployment benefits,” South Carolina governor Henry McMaster (R) wrote to the state’s labor department.

Biden and his team pushed back on the idea that the federal benefits were to blame for a sudden shortage of workers, but they quickly changed course, with White House press secretary Jen Psaki ultimately saying that Republican governors “have every right to” reject the pandemic unemployment money.

That’s not the whole story: twenty-two governors decided they would stop paying the PUA assistance for self-employed workers. As Sen. Bernie Sanders (Ind.-VT) pointed out at the time, “Congress did not grant states the ability to strip PUA benefits away from vulnerable workers.”

Sanders told Biden’s labor secretary Marty Walsh that he had an obligation “to ensure this aid gets to workers.” Instead, an unnamed Biden administration official told CNN: “There is nothing we can do.”

This spring, as more Americans were allowed to get vaccinated and states started loosening restrictions on businesses, companies and industry groups quickly began to complain of a labor shortage.

After a jobs report in early May showed that hiring was lagging far behind economists’ projections, Republican officials, the US Chamber of Commerce, and business owners called on the federal government to end the enhanced unemployment benefits, repeating the line that the benefits were deterring people from taking jobs.

But there are plenty of reasons why people may not have raced back into the workplace when businesses started reopening.

US Census surveys have consistently found that millions of Americans are still afraid of contracting or spreading COVID, while many people are handling new care responsibilities due to the pandemic, such as taking care of children without day care services or relatives who need help.

A survey last month from the jobs website Indeed found the most common reasons people cited for not urgently searching for work was not unemployment benefits, but rather fear of COVID and care responsibilities.

According to one analysis of census data by Arindrajit Dube, an economist at the University of Massachusetts, Amherst, states saw no uptick in employment in the two to three weeks after benefits were cut off. However, in that same time period, people in the states where benefits were cut off did report more economic hardship, measured by difficulty paying usual household expenses.

Another study from Indeed similarly concluded that ending the benefits had not encouraged people to return to work. Other reports found that cutting off benefits may have contributed to a small increase in employment in those states.

Many West Virginians who wrote to the governor’s office explained that they had been unable to return to work due to childcare needs or health problems. Others said they couldn’t find any work in their field and didn’t believe they could make enough money to support themselves if they took a minimum-wage job.

“By you choosing to end the federal programs early, you are going to cause those of us who truly need this money to end up penniless because we cannot take restaurant jobs getting only 15 hrs a week with no benefits and min wage pay!” one woman wrote on May 14.

She added: “I am in kidney failure and when COVID hit my self employment took a huge hit, and because of my illness I cannot subject myself to working out in the public. I have been trying to find a work-from-home job and haven’t been able to.”

Multiple emails to Justice referenced the fact that many job postings in their area have been for fast-food restaurants, which pay far below what they were making before the pandemic.

“I’m unsure where you get your numbers from, but I’m encouraging you to look at a local job site and see how many jobs are available besides fast food,” one person wrote, adding: “You’re punishing us and forcing us to work low-wage jobs in a pandemic that’s still ongoing — while you sit in your fancy resort.” (Justice owns the luxury Greenbrier hotel.)

“There isn’t enough jobs out there, the jobs don’t pay enough, we have to travel a long way to the job’s location and the job doesn’t pay enough to do so, or we just can’t find a job,” another West Virginia resident wrote. “I have put in over 60 applications, myself, in the last 2 months. Out of all of the applications I have put in, I have not been hired or offered a job from any of the places I have applied to.”

Worker Victories in the Courts

As governors around the country moved to cut off federal unemployment programs, the Biden administration has repeatedly trotted out anonymous officials to say their hands are tied, and there’s nothing they can do to help people — even those on PUA, the program for self-employed workers.

“We don’t have the legal authority,” an unnamed staffer told CNBC in early June.

While Biden and his team have pleaded powerlessness, workers have already won lawsuits in two states to prevent their governors from cutting off the federal unemployment benefits.

“By prematurely deciding to stop administering these federal benefits, Indiana has violated the clear mandates of Indiana’s unemployment statute — to secure all rights and benefits available for unemployed individuals,” the lawsuit argued.

Indiana sought a stay to avoid reinstating the federal unemployment benefits, but an appeals court denied that request, and the state said it would restart the payments soon. On Tuesday, Holcomb formally appealed the Marion County judge’s order to restart the unemployment payments.

In Maryland, workers filed a class action lawsuit on July 1 arguing that Republican governor Larry Hogan’s decision to cut off the federal unemployment benefits violated state laws governing the administration of unemployment programs. They also questioned whether Hogan had the authority to suspend PUA payments.

Last week, a Baltimore Circuit Court judge issued a preliminary injunction blocking the benefit shutoff, finding that the “personal magnitude of the harm associated with losing benefits for plaintiffs and other individuals currently receiving them is greater than the purely fiscal impact on the state of being required to continue to administer these benefits.”

Judge Lawrence Fletcher-Hill also concluded the plaintiffs would likely succeed in their claim that state laws require the Maryland labor secretary to make use of all available federal unemployment benefits.

A Hogan spokesperson said the governor and his labor secretary “fundamentally disagree” with the judge’s decision, but would not appeal.

Workers have filed similar lawsuits in Oklahoma, Texas, and Ohio, and an activist in Florida is getting ready to sue her state’s governor, too.

In the meantime, Hardy has been left scrambling. Her frustrations have been exacerbated by the fact that while her benefits were cut off, the state has been offering millions in prize money to encourage people to get vaccinated, as part of its Do It For Babydog COVID-19 vaccine lottery.

“I don’t even know what my grandkids are going to have for dinner tomorrow, but West Virginia is giving the money away right and left,” said Hardy. “That was a huge insult.”

Julia Rock is a contributing writer for the Daily Poster.

Andrew Perez is a writer and researcher living in Maine.

Our new issue, “The Working Class,” is out in print and online soon. Subscribe today to get it.