"As a doctor I can tell you: Your eyes, your ears, and your teeth are connected to your body. I did not have to go to medical school to tell y'all this, but apparently I do have to tell Congress this." 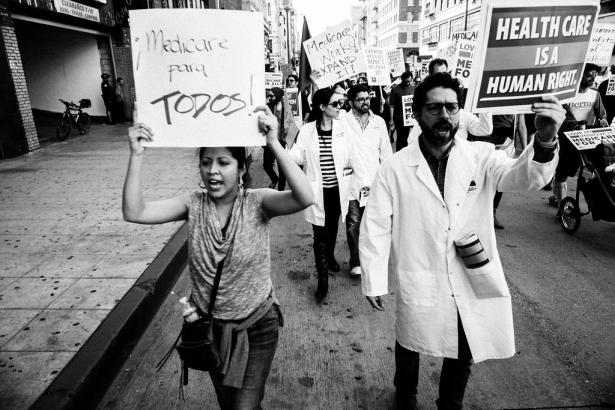 "Medicare for All Rally" by mollyktadams,licensed under CC BY 2.0

"Now, as a doctor I can tell you: Your eyes, your ears, and your teeth are connected to your body," Dr. Sanjeev Sriram, an adviser to the advocacy group Social Security Works, said during a rally on Capitol Hill. "I did not have to go to medical school to tell y'all this, but apparently I do have to tell Congress this."

"These things are not luxury items. Your teeth are not luxury items," Sriram continued. "We can make Medicare cover dental care when we start making changes and stop making excuses. The 56th anniversary is as good as any other occasion to expand Medicare to cover more people, to do the work that has not been done for generations."

The groups' petition specifically demands that Democrats in Congress prioritize:

"We can't let Congress pass up this chance to transform our healthcare system for the better," the document reads. "Tell the House and Senate to include a plan for strengthening Medicare in a final reconciliation package!"

The petition delivery came after Senate Democratic leaders agreed to include a substantial expansion of Medicare coverage in a recently unveiled $3.5 trillion budget reconciliation proposal. But, as it stands, the measure would not lower the program's eligibility age from 65 to 60, a move that would extend the program's coverage to 23 million people.

In a virtual speech to the activists gathered in Washington, D.C. on Friday, Rep. Pramila Jayapal (D-Wash.) argued that Congress now has a "historic opportunity" to build on Medicare, which currently covers roughly 62 million people.

Jayapal, the chair of the Congressional Progressive Caucus, is calling for a both a lower Medicare eligibility age and the inclusion of dental, hearing, and vision coverage in the forthcoming reconciliation package.

"I'm also pushing to go further. Now more than ever, we need to guarantee healthcare for everyone, as a human right," said Jayapal, the lead House sponsor of the Medicare for All Act of 2021. "Healthcare without co-pays, private insurance premiums, deductibles, and other out-of-pocket costs. We need Medicare for All. In fact, we needed Medicare for All yesterday, when nearly 100 million people were uninsured or underinsured in the richest nation on the planet."

Supporters of Medicare expansion, including the activists who demonstrated on Capitol Hill Friday, are urging Congress to fund the new benefits by allowing Medicare to directly negotiate prescription drug prices with pharmaceutical companies—which it is currently barred from doing under federal law. A recent Government Accountability Office (GAO) study commissioned by Sen. Bernie Sanders (I-Vt.) found that people in the U.S. pay two to four times more for prescription drugs than the residents of other rich countries.

"It is time to end the international disgrace of Americans paying the highest prices in the world, by far, for prescription drugs," Sanders said in virtual remarks at Friday's rally. "The time is now, more than 50 years later, to fully realize the vision of what Medicare is supposed to be about."

Medicare is 56 years old today. It’s past time to strengthen and #ExpandMedicare by:

While some Medicare recipients receive dental, vision, and hearing coverage through more expensive Medicare Advantage plans, Medicaid, and employer-sponsored retiree plans, millions of seniors are left without such benefits each year.

According to a recent analysis by the Kaiser Family Foundation (KFF), around 24 million Medicare recipients did not have dental coverage in 2019.

In an op-ed for The Hill on Friday, Social Security Works president Nancy Altman wrote that "it makes no sense to exclude hearing, dental, and vision benefits from a program designed for seniors."

"Congressional Democrats are currently in the midst of crafting a reconciliation package that can, and should, include all of these benefit expansions," Altman added. "Strengthening and expanding Medicare is smart politics for any Democrat that wants to win reelection in 2022. More importantly, it's the morally right thing to do."