From Nationalisation of Banks in 1969 to Privatisation Agenda Now

The essence of neoliberalism is to promote classical capitalism and remove the State from its role as regulator and controller, and create a huge increase in income and wealth inequality. 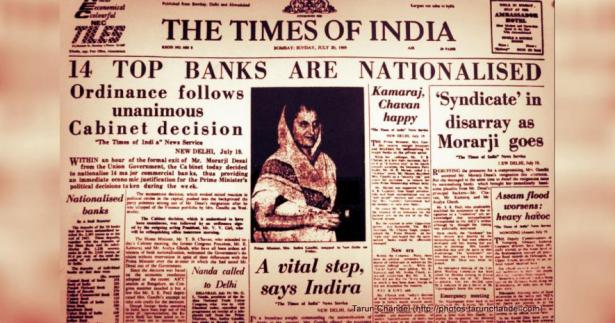 On July 19, 1969, as many as 14 major banks were nationalised in the country. Today, after 52 years, there is some talk again of privatising the nationalised banks, which naturally raises the question: why were banks nationalised at all?

Bank nationalisation was neither a socialist measure, as many progressive Congress men claimed at the time, nor was it some minor routine measure of trivial importance that made so little difference to the capitalists that they couldn’t care less, as many critics of it belonging to the extreme Left had suggested then.

True, Rudolf Hilferding, the well-known Marxist economist and author of Der Finanzkapital, a work that was extensively used by Lenin in developing his theory of imperialism, had argued that the nationalisation of half a dozen top German banks would break the back of German capitalism; but that was just unwarranted optimism. Unless the nationalised banks are used differently from the way they are used under capitalism, simply nationalising them would not break the back of capitalism; and for that to happen the programme of nationalisation would have to be far more sweeping in scope, much beyond just taking over six banks.

From this fact, however, it is erroneous to conclude that it makes no difference to the capitalists whether banks are nationalised or not: impairing the ability of monopoly capitalists to use the enormous financial resources garnered by banks is clearly a setback for them that they fiercely resist.

In the Indian context, bank nationalisation was an integral part of the dirigiste strategy that India, in common with several other Third World countries, had followed after decolonisation. The dirigiste strategy, in fact, had grown out of the anti-colonial struggle in countries where the leadership of the bourgeoisie over this struggle could not be shaken off.

The post-decolonisation development strategy, therefore, was not aimed at building socialism but at building capitalism that was relatively autonomous of imperialism, and, for that reason sufficiently broad-based domestically. For this, it had to protect, and promote to a degree, peasant agriculture and petty production, instead of encroaching upon them and destroying them as is the usual practice under capitalism.

In other words, while this development strategy was not aimed at building socialism, the capitalism it was helping to build was not classical capitalism either. The chief hallmark of this strategy was relative autonomy from metropolitan capital and a degree of protection of petty production and peasant agriculture against encroachment from the capitalist sector existing outside of it, even as a capitalist tendency consisting of an admixture of peasant and landlord capitalism develops within it.

For effecting all this, a significant involvement of the State was entailed in the process of development as an investor, regulator and controller. Because of its difference from classical capitalism, various names were used for this strategy, from Jawaharlal Nehru’s term “building a socialistic pattern of society” to Michal Kalecki’s term “intermediate regime”.

The crucial point is that any move towards classical capitalism would have entailed a sacrifice of the relative autonomy of the development strategy vis-à-vis metropolitan capital. It would have meant a grossly inegalitarian trajectory, closely enmeshed with imperialism, which would have sabotaged the process of nation-building that was a desideratum of the anti-colonial struggle.

Bank nationalisation, though effected somewhat later than the enunciation of this strategy, was crucial for it. Since credit represents command over capital, the social, geographical and sectoral distribution of credit is a key determinant of the nature of the development trajectory that a country is following. Under a dirigiste regime, therefore, as distinct from classical capitalism, since the State has a crucial role in regulating capitalism, and petty production and peasant agriculture are protected while relative autonomy is maintained vis-à-vis metropolitan capital, the control over credit disbursement becomes a key policy instrument which can be wielded only with the nationalisation of banks. The government of India, in fact, experimented with “social control over banks” for a while as a means of regulating the distribution of credit, but the ineffectiveness of such “social control” persuaded it to nationalise banks as the only effective means of regulation.

The bank nationalisation of 1969, followed later by a second round of nationalisation of smaller private banks, had a profound impact: it made institutional credit available to agriculture and petty production, loosening the hold over the peasantry of the old moneylenders; it spread the network of banking all over the country. And it sought to build a wall between production and speculation, thereby ensuring that credit was not used for speculative activities as is common under classical capitalism.

True, the better-off sections of the peasantry got the lion’s share of the credit; but the social distribution of institutional credit became much wider than before, in fact wider than anywhere ever in the capitalist world. And the Green Revolution, which, whatever reservations one may have about its ecological consequences, freed India from the clutches of “food imperialism” practiced by metropolitan powers, could not have occurred without it.

The dirigiste strategy, however, was undermined by the global ascendancy of international finance capital, with which the Indian big bourgeoisie got closely integrated and abandoned its project of following a trajectory relatively autonomous of the metropolis.

The essence of neoliberalism is to promote classical capitalism with its spontaneous immanent tendencies. This means encroachment upon petty production and peasant agriculture, a removal of the State from its role as regulator and controller, and an immense increase in income and wealth inequality.

The massive peasant distress reflected in a spate of peasant suicides, the withdrawal of the State from its role as provider of essential services, like education and healthcare, and the rise in the share in national income of the top 1% of the population from 6% in 1982 to 22% in 2013-14 (the highest in a century) are all indicators of this. The demand for privatisation of banks is a part of this agenda.

As neoliberalism has advanced, its agenda has become more and more explicit and brazen. The attack on labour rights carried out under the cover of the pandemic reflects this, as do the three farm laws, whose net effect would be to decimate peasant agriculture by opening it up to capitalist encroachment.

In fact, every major economic step taken by the Narendra Modi government, from Goods and Services Tax, to demonetisation, to the farm laws, has been aimed against the petty production sector and has sought to carry forward the process of primitive accumulation of capital, in accordance with the neoliberal agenda.

The privatisation of banks will play exactly the same role, of withdrawing whatever little institutional credit was going to agriculture (the denial of such credit to agriculture has been going on for some time anyway under the neoliberal regime), and of ensuring that the process of decimation of peasant agriculture gathers accelerated pace.

The effects of such decimation will not remain confined to the economic sphere alone. We mentioned earlier that the dirigiste regime was integral to the project of nation-building that was conceived as part of the anti-imperialist struggle. In countries like ours, classical capitalism, while inflicting primitive accumulation of capital will never succeed in absorbing the displaced petty producers into the active army of labour. Even in Europe this had not happened, but mass emigration to the “New World” had prevented a social crisis.

Opposition to this process of primitive accumulation of capital, which must include opposition to the three farm laws and to the privatisation of nationalised banks, is of paramount importance, if India is not to join the ranks of “failed” post-colonial States queuing up as supplicants before their former imperial masters.