Let us help Cuba become what its revolution has promised rather than try to mold it to some specious image in which profit obliterates justice and equality. 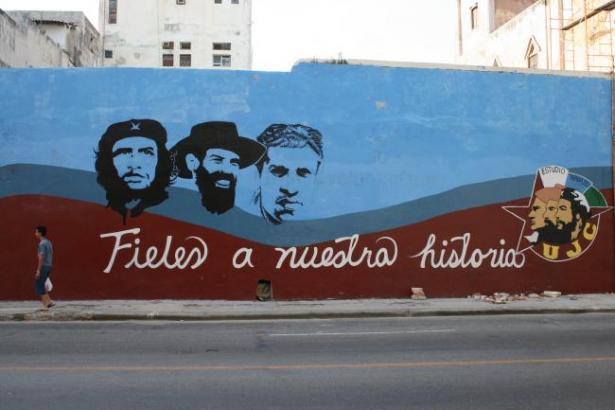 A mural with the words "faithful to our history" in Havana., Vincent Pollard, Flickr

The recent protests in Cuba, especially those on July 11, 2021 have provoked consternation in some and hope in others. The protests, which began in the Havana suburb of San Antonio de Los Baños, the eastern city of Palma Soriano, and quickly spread nationwide, are the first examples of visible large scale discontent since the demonstrations that took place in 1994 at the height of the economic crisis brought on by the Soviet Union’s collapse.

By and large, the “news” reflects entrenched positions. Corporate media publishes opinion pieces about a people bravely seeking freedom and treats these protests as if they are the beginning of the end of the Cuban revolution. The virulent Right screams about fake disappearances and invented torture, while remaining silent about countries such as Colombia and Nicaragua where such horrors are actually being perpetrated. Meanwhile, acritical sectors of the Left deny any sort of official violence or justify it in the name of the revolution’s survival. None of these lenses reflect the real story. Unsurprisingly, the most factual and complete accounts come from Cubans who live in the country and have for years contributed to constructing its revolution.

A Cuban who resides in Cuba, a Cuban who is part of the vast diaspora, or a foreigner defending a particular political position: each of these placements has its lens.

It has been 40 years since I’ve lived in Cuba and, although I visit frequently, I know it makes a difference that I am not there on the ground right now, experiencing current events for myself. When reading the variety of interpretations that have emerged over the past several weeks, it is important to take into account not only the writer’s political position but where she or he lives. A Cuban who resides in Cuba, a Cuban who is part of the vast diaspora, or a foreigner defending a particular political position: each of these placements has its lens. And in a country that has surprised us for so long, any opinion may be nothing more than a snapshot of the moment.

The Cuban government’s response to the mass demonstrations set a disturbing tone for their immediate aftermath. President Díaz-Canel went to San Antonio de los Baños hoping to calm the crowd as Fidel Castro had so often been able to do. But Díaz-Canel misjudged the protest’s importance and temperature. Phrases such as “the streets belong to the revolutionaries” and “we are prepared for anything” met genuine discontent with thoughtless dogmatism. To say that this was a poor response is an understatement. Inside as well as outside of Cuba criticism came swiftly.

Díaz-Canel apologized, and the Cuban government announced conciliatory measures on July 14 in an attempt to address the people’s legitimate concerns. The changes, which included lifting some taxes and import limits on medications and food, announcing changes to the state sector’s salary scale, and loosening some restrictions on food rationing, may be all that are possible given the country’s dire economic situation. However, they probably won’t be enough to placate long frustrated demands.

The Cuban Communist Party has demonstrated its ability to remain in power through decades of crises. And those of us who know and love the revolution fear that the focus on survival at any cost will leave us with a situation that is far from the one envisioned by the revolution’s creators. I speak as someone who experienced the revolution’s glory years: nationalized natural resources, newly acquired literacy, free education and healthcare, almost full employment, an equitable distribution of food and other necessities, a legal system with real input from people who discussed new law at neighborhood meetings, extraordinary promotion of the arts and sports. Cuba also developed programs of international solidarity and disaster relief beyond anything carried out by much wealthier countries. While the rich nations offer their surplus, what Cuba offers often means sacrifice for its own population. During the decade (1969-1980) I lived and raised four children there, these achievements weren’t statistics but the day-to-day reality.

In the midst of tremendous economic and social stress, follow-through has not materialized or been too slow.

Cuba’s reality today is one in which education and healthcare are still free and universal, but also one in which important constitutional changes and party promises aimed at producing a more equitable society have been enacted in word only. In the midst of tremendous economic and social stress, follow-through has not materialized or been too slow.

It isn’t unusual for politicians to promise more than they can produce. It happens on a daily basis in the United States and in most of the world’s countries. But in Cuba, where a genuine people’s revolution created mechanisms for transparency and change, this contradiction is not acceptable. Not to the old timers who remember what life under the Batista dictatorship was like, and not to the youth who, like youth everywhere, demand justice and demand it now.

In Cuba, the list of challenges seems endless. On top of the extreme economic problems brought on by 62 years of blockade and a difficult transition from a socialist system to one that can function in today’s world, Covid-19 is out of control. The country’s excellent biochemical industry has developed two proven vaccines, Soberana (91.2 percent efficacy) and Abdala (92.28 percent efficacy) and is attempting to vaccinate its entire population. But even with Cuba’s organizational expertise, a shortage of syringes—one outcome of the blockade—has rendered this a slow process. The severity of the pandemic has also devastated tourism, putting an additional strain on the country’s economy. A long-awaited consolidation of the monetary system has been rocky. In July, a major power plant suffered a breakdown, causing frequent blackouts. Scarcities became more acute. Tropical storm Elsa was another blow. Many Cubans are frustrated beyond their ability to wait for incremental change.

Over the past decade Cuba has foolishly cracked down on artists and others whose work has protested the status quo, creating the current complex situation. Despite this pattern of repression, authoritative voices from inside Cuba—including Andrés Perdomo Guanche, Jorge Fornet, Arturo Arango, Margarita Alarcón, and Víctor Heredia, to name just a few—are attempting to situate the protests in context.

La Tizza, an independent Cuban news source that describes itself as “a venue for thinking and making socialism,” in its July 15 editorial wrote: “Those who came out to protest the State and socialism in Cuba were ordinary people….Those who continue to read Cuba as if the Caribbean were the Baltic are excitedly sharing via social media images of Berlin or Prague at the moment of European socialism’s demise. They don’t know that the Cuban Revolution won’t melt like some merengue because it’s never been made of merengue. Not because it hasn’t been sweet, but rather because it’s also had its moments of bitterness, which up to now we’ve been able to transform into strength.”

The La Tizza editorial goes on to describe protests not between the people and the state but between two groups of people with two very different social projects. One group, victim of capitalist propaganda, has given up on its dream of a just society. The other is unwilling to relinquish the revolutionary aspirations it has nurtured for generations, the legality of a socialist constitution ratified by democratic referendum, or the idea of a nation of peace, social justice, and national dignity exemplified by a revolution resting on tarnished laurels rather than opening new pathways to the future.

Beloved singer-songwriter and truth-teller Silvio Rodríguez asks, “who are the comrades responsible for the fact that, after two Communist Party congresses and what is set forth in the Constitution, what needs to change hasn’t changed? Who,” he asks again, “in the upper echelons of government? I want names and positions. And I want to hear what they have to say for themselves.”

Marcia Leiseca, one of the founders of Casa de las Américas, who even at an advanced age is still active in cultural work, writes, “it’s time to speak, to exercise opinions and offer ideas.…We must establish a dialogue with young people, encourage their participation in a new present and future. What happened on July 11 has been manipulated by the extreme Left and the extreme Right, the former blaming the unjust blockade and outside interference, overstating the resultant vandalism and absolving us of all responsibility. The latter exaggerates what took place, invents horrors such as disappearances, torture, and violation of human rights.”

Cuba is at a crossroads, and how the current crisis is handled may well determine the revolution’s survival.

Cuba is at a crossroads, and how the current crisis is handled may well determine the revolution’s survival. The U.S. government needs to repeal its blockade and stop the overt and covert operations designed to destroy the revolution. Cuba’s leaders must issue verifiable lists of detainees and name and punish those officials who beat protestors or otherwise failed to follow Cuba’s own civil guarantees.

Cuba is rightly indignant that the United States continues to interfere in its internal affairs. An analysis of social media bots shows that many, although not all, of the protests are being organized and funded from outside the country, by U.S. government agencies and rightwing Cuban forces. During the protests, people received repeated messages claiming that provincial governments had fallen to the demonstrators and urging people to join a victorious situation that didn’t exist. This is understandably a sore point in a country that has endured attacks from the United States throughout the history of its revolution. I hope the Cuban government will begin to answer the protests with dialogue rather than repression.

Before July 11, dissent in Cuba was sporadic and limited to specific social groups or isolated experiences of censorship or repression. On that day, they were larger and more comprehensive. Thousands have protested excessive government control. I believe they should be heard.

I also believe that the Cuban government has a responsibility to issue information about incidents of violence on both sides, make available lists of those currently being detained, and name and punish police and other officials who have gone against the country’s own constitutional guarantees of freedom of assembly and dissent. At the same time, I think it is worth noting that Cuba is a nation of eleven million. The recent protests are far from constituting a tipping point.

I urge people on all sides to think about how extraordinary it is that a tiny island 90 miles from U.S. shores has been able to survive for more than half a century against every sort of covert and overt attack. Let us help Cuba become what its revolution has promised rather than try to mold it to some specious image in which profit obliterates justice and equality.

Margaret Randall is a feminist poet with a long history of social activism in Mexico, Cuba, and Nicaragua, as well as the United States. In Mexico, she co-founded the bilingual journal, El Corno Emplumado. She has received many awards, most recently the Poet of Two Hemisphere Prize (Quito, Ecuador 2019) and the 2020 George Garrett Award given by AWP.

Editors’ Note: This piece forms part of NACLA’s continuing coverage and analysis of recent protests in Cuba, their evolving aftermath, and the wide-ranging responses they have elicited from left circles in the Americas and beyond. To read other pieces in the series, click on the titles below.