labor The DNA of a True Labor Movement Leader: A Day in the Life of AFL-CIO President Rich Trumka

For the labor movement, Rich Trumka’s death is a huge loss. His leadership qualities are a reminder of what the movement will so desperately need to move forward. 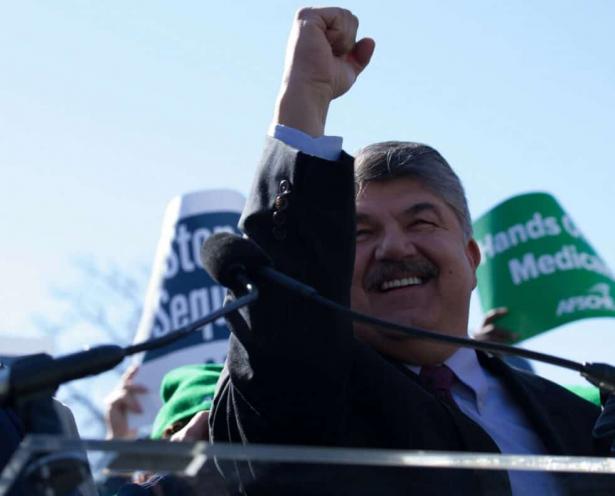 Since the unexpected death of AFL-CIO President Richard Trumka on August 5,  many who knew and worked with Rich have posted tributes focusing on a variety of leadership roles that he took on: in the Western Pennsylvania mines as a young health and safety committee chairman; in the Mineworkers for Democracy’s struggle to save that union; in the famous Pittston strike against one of America’s most vicious corporate employers; in the international arena where he demonstrated the connections between South African apartheid and the impact on miners around the world; in the first contested AFL-CIO election campaign where, with John Sweeney and Linda Chavez-Thompson, he sought to revitalize the American Labor Movement; in iconic anti-racism speeches he gave on behalf of presidential candidate Barack Obama and in the aftermath of the Michael Brown killing in Ferguson; and in key intiatives he created and implemented while leading the AFL-CIO not only in the Federation’s political, legislative, and organizing programs, but also its civil rights, immigration, and community partnership work as the  American labor movement’s representative of all working people.

In my experience working with Rich over some 22 years, first as  AFL-CIO General Counsel and then as his Executive Assistant and Chief of Staff, I witnessed the leadership qualities needed to take on all of these critical roles.

And this was indeed fortunate, as it also became apparent just how vitally the labor movement needed such a combination of experience, talents, and leadership skills.

Thus, rather than focusing on any one particular example of his  leadership, I offer the following vignettes, describing a rather typical set of meetings that Rich had over the course of approximately one day, in the early days of his AFL-CIO presidency.

First, an early breakfast meeting with a building trades leader at the Hay Adams Hotel, across the street from the AFL-CIO’s headquarters building. I don’t recall the subject of the meeting. I do recall that during the course of the breakfast at least seven or eight members of the Hay Adams waitstaff (including two supervisors) came to the table to thank Rich profusely for voluntarily intervening in a bitter labor dispute they had had some time earlier with the hotel, saving their jobs and their long-term job security.

Next he was off to the White House, where he met with President Obama’s then-Chief of Staff, Rahm Emanuel. The Affordable Care Act had been recently signed into law, and various implementation questions had emerged affecting affiliate unions in different ways, mostly relating to the Act’s impact on union health plans and excise tax issues.  Affiliates expected Rich to address their concerns. Rich knew he had to advocate solutions in one sector that would not aggravate the problems in another sector. He understood and had mastered the technical issues, and made significant progress.

From there Rich rushed back to the office for a visit with Chicago Tribune Labor Reporter Steve Franklin. In theory, just a social drop by. Almost an hour later, after Rich delivered a comprehensive update on the state of the labor movement and the economy, both nationally and in Chicago (!), and offered a history lesson on US and foreign strikes (Franklin had authored a highly respected book on strikes against three large US corporations), Rich apologized and ushered his guest out, not wanting to keep his next meeting waiting.

This next one was with Bhairavi Desai, the dynamic leader of the New York Taxi Workers Alliance who had brought down from New York several taxi drivers – Bangladeshi and Pakistani immigrants –to discuss how even without formal employer recognition their organization was acting as a union and effectively bargaining with the City. Soon they would expand geographically and become the National Taxi Workers Alliance, by which time Rich’s support would pave the way for the AFL-CIO to grant the first national charter ever to be given to a worker-rights organization that did not yet have official union status.

Trumka left the taxi workers to take a call with Elizabeth Warren, soon to become one of his favorite Senators. Warren at the time was building support for a Consumer Finance Protection Board and seeking to get the new agency included in the Dodd-Frank Act that was gaining steam in Congress. She saw Rich, who was deeply immersed in the Wall Street reform legislation,  as a critical force in its passage. To be sure, he promised Warren that he was completely supportive and would have her back on this and in general. He meant it, she knew it, and it mattered – a lot.

Much of the afternoon was spent in a series of meetings and calls concerning the American Federation of Government Employees’ (AFGE’s) campaign to organize some 44,000 TSA airport screeners. Rich had convinced the union that with organizing needed in small and large airports all over the country, there was an active role for the Federation to play in support of the campaign. Accordingly, Rich was on the phone with AFL-CIO State Federation leaders in numerous states urging them to prioritize this campaign, to coordinate with local AFGE leadership, and to enlist local central labor councils in their states to become involved.

At one point during these meetings he took a break to attend an all-staff meeting in the AFL-CIO’s headquarters that featured a presentation by the building engineers and maintenance staff explaining how the building functions – how its systems operate physically. Rich intended simply to sit in for a few minutes, but he soon found himself on the stage, discussing the nuances of the operations with the same level of detail as the engineers, themselves, did. And they loved it.

The final meeting of the day took place at around 5 pm — hosting a visit from Juan Somavia, the Director-General of the International Labor Organization (ILO). Somavia, in Washington for other meetings, clearly believed he was simply paying a short, perfunctory courtesy call on the then-relatively new President of the AFL-CIO, whom he had not met before. Half an hour later, as Rich more than held his own with Somavia, a former professor of economics, in discussions ranging from complex matters of international finance, to labor’s issues with the World Trade Organization, to the constraints of tripartism at the ILO, Somavia — who had come with no notepad — started scrambling for pieces of paper to write down Trumka insights. After more than an hour, with his aides repeatedly signaling that he was late for his next meeting, the Director-General apologized profusely for having to leave, asking when they could next continue the discussion.

When I try to think of one Trumka quality that stands out, it’s impossible. What was so special about Rich — and so critical to his ability to simultaneously serve and lead the labor movement — was the whole package. Indeed, one glaring omission from the broad skill set seen in the vignettes above was his mastery as an orator and chief spokesperson for the labor movement.  When he spoke, people listened. He commanded respect, not for Rich Trumka but for the working people he represented.

Rich was an incredibly fast learner, very smart and highly strategic. He was a sponge, who once briefed, rarely needed notes — whether his target audience was the waitstaff at the local hotel restaurant, one of the sharpest U.S. Senators to hold office, a prize-winning national journalist through whom he consciously moved the  labor movement’s message, or the Director-General of the U.N.’s international labor agency. For staff called upon to brief Rich on complex matters of substance, engaging with him was intellectually fascinating. Typically staff came away from these meetings gleaning as much new information as they imparted.

For the labor movement, Rich Trumka’s death is a huge loss. With the enormous amount of unfinished business that was still on his plate, his leadership qualities are also a reminder of what the movement will so desperately need to move forward, and what the Federation will require both to service its affiliate unions in their daily concerns  and at the same time to generate the creativity and solidarity necessary to achieve a voice for all workers.