Cuomo's Departure Is an Opportunity for the Left

It cannot be overstated how much of an obstacle Cuomo, once a popular and inordinately powerful executive, was to the progressive movement in New York. His successor, Kathy Hochul, will have to gravitate to the left, where New York voters are. 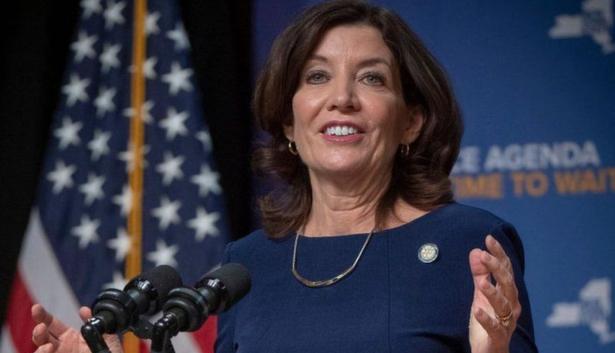 In less than one week, Andrew Cuomo will no longer be governor of New York. This is not a sentence I ever quite believed I would write, but it is very much true. Cuomo has filed for retirement, readying to collect a $50,000-a-year pension. He may dream of running again, with nearly $20 million in his campaign account. But for now, he will have to slink away in disgrace, and give way to the next governor of New York.

Her name, of course, is Kathy Hochul and she very much, at first glance, shares Cuomo’s politics. She was first added to Cuomo’s ticket in 2014, when she ran with him for lieutenant governor. She offered gender and regional balance, as a Buffalo area native, but was not in any form an ideological counterweight. She was there because Cuomo, seeking his first re-election, wanted a Democrat who would never threaten or diverge with him on any policy questions. Over the last seven years, she has been a loyal soldier, never challenging Cuomo in public. She functioned largely as his emissary to smaller events throughout the state that he would never attend, traveling extensively in the mode of another well-regarded hustler, Chuck Schumer.

By now, Hochul’s political history is known—there are no surprises, no hidden twists. In 2007, Governor Eliot Spitzer appointed Hochul to the position of Erie County clerk, where she promptly made a name for herself aggressively opposing Spitzer’s push to give driver’s licenses to undocumented immigrants. Spitzer was ultimately far ahead of his time. Hillary Clinton opposed Spitzer, as did a young, conservative congresswoman from upstate New York named Kirsten Gillibrand. Hochul emerged from the vanishing right-wing of the Democratic Party, appealing to social conservatives who, in a less polarized era, could still back Democratic candidates. In 2011, after the married Republican Congressman Chris Lee resigned over soliciting a woman on Craigslist, Hochul ran as the Democratic candidate in a special election to fill a seat that had been in GOP hands for decades. Hochul won an upset victory, benefiting from candidates on the Republican and newly-created Tea Party ballot lines splitting votes.

As a congresswoman, Hochul predictably operated to the right of the national party. She was supportive of slashing funding to Medicaid and was one of a few House Democrats to vote to hold Attorney General Eric Holder in contempt of Congress over the AFT gunwalking scandal. In 2012, she narrowly lost re-election to Republican Chris Jacobs. In that race, she proudly touted her endorsement from the National Rifle Association.

Hochul did not always spurn the left flank of the party. Having lived through the hollowing out of Buffalo, once an industrial powerhouse, she was a staunch critic of free-trade agreements. She never repudiated Barack Obama’s Affordable Care Act. After leaving Congress, and before she joined Cuomo’s ticket, Hochul was hired by M&T Bank as a Vice President of Government Relations. During her 2014 campaign, Robert G. Wilmers, then the billionaire CEO of M&T bank, contributed $19,000 toward her election. By the time of that campaign, she had repudiated her old views on undocumented immigrants.

In 2018, Hochul struggled to win re-election against Jumaane Williams, then a city councilman. Williams, despite raising less than $1 million and assembling a relatively thin campaign operation, netted almost 47 percent of the vote. A Black politician from Brooklyn, Williams crushed Hochul there and beat her decisively in the white, liberal precincts of Manhattan. Williams also ran strongly in a few increasingly progressive rural counties in New York, including Columbia County. Running with the support of the Working Families Party and the Democratic Socialists America on a ticket with actress Cynthia Nixon, Williams was a candidate unabashedly to Hochul’s left. Throughout the summer, he assailed Hochul for too closely aligning with Cuomo, who had recently seen his closest aide, Joe Percoco, convicted on corruption charges. Hochul could not say, in 2018, how she differed from Cuomo at all. “This state is better served when you have the two executive officials, the governor and lieutenant governor, working in partnership,” she said.

And yet, as New York’s first female governor, she represents the best opportunity the Left has had in more than a decade—at least since the early days of the Spitzer administration. It cannot be overstated how much of an obstacle Cuomo, once a popular and inordinately powerful executive, was to the progressive movement in New York. No Democratic executive in America was more hostile to their aims. No Democratic executive in America dared to so brazenly prop up Republicans in his own state. For almost a decade, Cuomo blocked Democrats in Albany from passing stronger tenant protections, allowing developers and landlords to drive hundreds of thousands of working-class tenants from their homes. He underfunded public universities and public schools. He dithered for years on pushing the Dream Act through the legislature. He allowed New York to have some of the worst campaign finance and election laws in the country. Through it all, he took special delight in attempting to crush progressives, trying and failing repeatedly to completely destroy the Working Families Party.

All of that is over. Not because Hochul is going to emerge as some kind of secret socialist—no one believes this, me included—but because she is going to behave like a conventional, center-left Democrat. Yes, the same woman who took the NRA’s endorsement and battled against driver’s licenses for the undocumented is going to govern like some mix of Jay Inslee, Gavin Newsom, Phil Murphy, and Gretchen Whitmer.

Most politicians migrate to where their party and voters are. At times, this is lamentable, but now it will work to the Left’s benefit. The neoliberal ascendance has ended; Third Way politics, for now, is no more. We are in a world where Joe Biden is the most progressive president of the last 40 years and Chuck Schumer, the Senate majority leader, is gravitating further and further to the activist left. Both of these politicians have taken deplorable votes: for the Iraq War, for financial deregulation, for punitive sentencing. It can be argued Biden and Schumer helped create many of the crises we confront today. At the same juncture, they are acting very differently now. The voters are different, the mood is different, and they are reacting to what is before them.

There is another model for Hochul: Kirsten Gillibrand. Gillibrand’s brief tenure in the House very much resembled Hochul’s. An Albany area Democrat, Gillibrand belonged to the Blue Dog coalition and campaigned vigorously against amnesty for undocumented immigrants. Like Hochul, she opposed granting them driver’s licenses and embraced guns, winning a 100 percent rating from the NRA. Once Gillibrand became a U.S. senator, she raced to her left, in a bid to be in lockstep with where the Democratic Party was headed. All of this is cynical, of course, and very much self-serving, but it is also democracy in action. New York did not want a Blue Dog senator. By the latter half of the 2010s, Gillibrand was one of the most liberal members of the Senate, even co-sponsoring Bernie Sanders’ Medicare for All bill.

It is not hard to imagine Hochul shedding her past entirely. She is much more conciliatory than Cuomo. She is not vindictive. She is largely well-liked. In the early days of her transition, she has already met with Williams, her former opponent. Cuomo would never have met with, let alone issued a joint statement with, the progressives who challenged him in 2014 and 2018. A new era, in every way, is here.

But more important than what lies in Hochul’s heart is what already exists in her head. She’s ambitious enough to already announce, unlike the bumbling David Paterson, she’s prepared to seek a full term as governor. She is more seasoned than many other politicians in her position; winning a swing House district is not easy. Unlike Gillibrand, she will probably lack the clout, regionally or nationally, to dissuade primary challengers. When she’s on the ballot in June 2022 for the Democratic primary, there will probably be other prominent challengers with her, including Letitia James, the state attorney general. Hochul will not have it easy. And that will mean she’ll have to build alliances.

It’s not clear Hochul has any outward contempt for the Left. Perhaps, deep down, she is the same Eric County clerk who railed against undocumented immigrants, the same right-leaning congresswoman who bagged the NRA endorsement. But the banal truth is that none of that really matters anymore. Hochul will be governor, with many more constituencies to appease. She is serious about winning next year. That drive to tamp down opposition will mean negotiating with and even handing victories to progressive politicians. Hochul cannot win re-election without a stronger performance in the vote-rich Black and Latino neighborhoods of New York City and the gentrifying, progressive quarters that are fast becoming crucial battlegrounds. She needs to be a governor for the five boroughs. Progressive and socialist power overwhelmingly resides there.

Hochul will be running for re-election next year during her first legislative session, her first budget negotiating season. Cuomo relished March in Albany, when budgets were rushed to fruition. Unrelated bills would be jammed into the budget at the last minute, with no public oversight. Cuomo exploited every constitutional power of his office to realize whatever retrograde priority he sought, like granting sweeping legal immunity to nursing homes and hospitals during the pandemic. The state legislature, more often than not, was cowed.

Hochul, campaigning for governor, cannot afford to behave in the same way. She needs votes. She needs to be seen as an ally of leftist legislators like Julia Salazar, Jessica Ramos, Zellnor Myrie, and Gustavo Rivera—or at least not draw their wrath. The progressives in the legislature, in turn, will have far more leverage to make demands of Hochul. If the new governor has a primary from her left, what better way to tamp it down than signing a bill greatly increasing funding to CUNY and SUNY? What better way to take the wind out of a challenger’s sails than preside over a popular, historic legislative session?

Cuomo was able to marshal the twin powers of capital and organized labor to repeatedly thwart the Left. Hochul will not have the years in power to command such machinery. Labor might like her, but could also hunt out other candidates. Real estate and Wall Street elites will fund her as the incumbent while hedging their bets elsewhere. Hochul could very well end up a much better governor than Cuomo. She simply won’t be as dominant. The young progressives who flooded Albany in 2019 and 2020 are gaining the experience to match their gumption. Their demands, in the new administration, will carry much more weight. Hochul must keep as many friends as she can in Albany. She will take their phone calls and emails. Election season demands it.

Ross Barkan is a contributor to the Nation and a Guardian columnist. His debut novel, Demolition Night, was published in 2018. You can subscribe to him on Substack.