Liz Shuler will serve as the nation’s top union official until summer 2022, when the AFL-CIO’s 50-plus affiliates can gather for their annual convention to vote on a permanent successor. 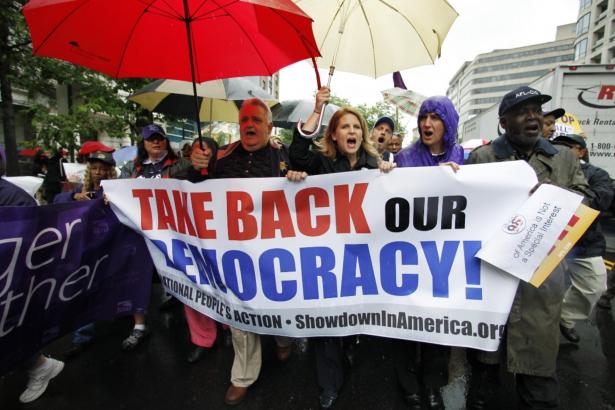 The AFL-CIO’s executive council voted Friday as expected to appoint Liz Shuler as the federation’s president following the unexpected death of Richard Trumka.

Shuler is the organization’s first female leader, a historic moment for organized labor in the U.S. She will serve as the nation’s top union official until summer 2022, when the AFL-CIO’s 50-plus affiliates can gather for their annual convention to vote on a permanent successor.

Shuler — who confirmed she will run for reelection in 2022 — said in an interview she hoped her appointment "signals that the labor movement is modernizing, and open to reflecting the change that's happening with our country," adding that "it is time for women to step up into leadership.

"That's what I hope to reflect: the hard work, dedication of women all across this country and workplaces who are toiling behind the scenes and also leading strikes and picketlines, and for them to see their rightful place in this movement," she said.

"We have the most diverse leadership team in the history of the AFL-CIO," Shuler said. "It's a huge day."

Shuler’s confirmation comes at a crucial time for the federation and its 12 million members. With the union membership rate about half what it was in the 1980s, the organization is at a crossroads: Leadership must decide whether to maintain Trumka’s near-laser focus on passing the pro-union Protecting the Right to Organize Act, or to step into a broader role in support of the labor movement by pouring resources into building membership.

Shuler does not see advocating for legislation and expanding membership as mutually exclusive, she said.

We can walk and chew gum at the same time," she said. "We have to be in the halls of power, and we have to be out in the streets."

On Capitol Hill, Schuler said the so-called PRO Act will be a "major focus." The AFL-CIO will also continue to work to pass the bipartisan infrastructure bill and try to ensure its priorities are included in Democrats' separate $3.5 trillion budget reconciliation plan.

"We want labor standards attached to make all of these investments with our tax dollars work for working people," she said. "And so we have to make sure that those jobs are good jobs and give people the opportunity to come together collectively in a union."

Shuler, who was unopposed, had the formal backing of AFT, AFSCME and IAM, some of the federation's largest affiliates. All highlighted her ability to build consensus and to continue the status quo.

"Shuler offers both strength and stability to our movement," AFT President Randi Weingarten, who seconded Shuler's nomination, said in a statement this week. "She thinks big but never misses a detail, she builds consensus, and she leads with great kindness and humility."

Weingarten, who was on Zoom for the vote, said in a text the mood in the room was "happy and inspired" following Shuler's election.

"The most important thing we could be focusing on is unity," Shuler said. "We have these 56 different unions around the table with different ideas and perspectives and cultures and opinions, and it's our job to unify that into a force that's undeniable for the rights and protections of working people in this country. We know that we can do that."

Shuler’s first job in labor was as an organizer for the International Brotherhood of Electrical Workers in 1993. She eventually worked her way up to become a lobbyist for IBEW and, later, executive assistant to its president, before Trumka named her his running mate in 2009.

The Guardian reported in 2019 that Trumka and Shuler were asking union presidents if they would support her as the federation’s next president. Trumka, officials said, would step down — but only if Shuler had enthusiastic enough backing to take over.

"They were a great team," AFL-CIO spokesperson Tim Schlittner said in an interview earlier this month. "It's been more than a decade of just a close partnership; they've been in lockstep for all these years."

The two "really were tight," Schlittner added. "Not just as friends and partners, but as far as their vision for the labor movement."