labor The 9 to 5 Movement: How Women Got Angry, Got Organized and Made Labor History

As the economy opened up to women a half century ago, one in three working women was an office employee. As the clerical workforce grew by leaps and bounds, so did a sense of injustice among the women, leading to the founding of the 9 to 5 Movement.

December 27, 2022 Ellen Cassedy teenvogue.com
Printer friendly
The 9 to 5 Movement: How Women Got Angry, Got Organized and Made Labor History Published December 27, 2022 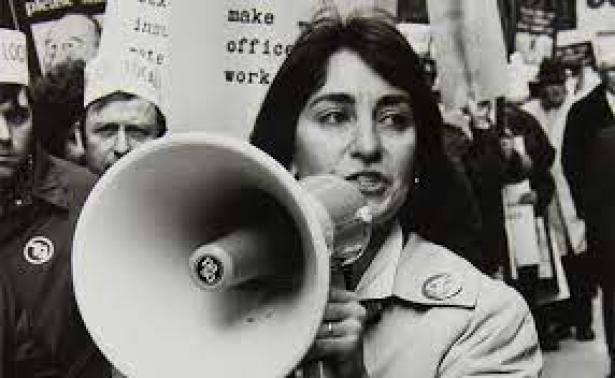 Karen Nussbaum, a founder of the 9 to 5 Movement, marches for equal pay in the 1970s.,Walter P. Reuther Library, Archives of Labor and Urban Affairs, Wayne State University

On a cold December morning in 1972, 10 women office workers fanned out across downtown Boston to pass out the first issue of “The 9 to 5 Newsletter.”

“We keep Boston’s businesses and institutions running smoothly,” the activists asserted. “Without us, they would grind to a halt. Yet we are underpaid and undervalued.”

Before long, the rallying cry of “Raises and roses!” could be heard throughout the country.

The 1980 hit movie 9 to 5, starring Jane Fonda, Lily Tomlin, and Dolly Parton, was inspired by this burgeoning movement of women office workers, as was Parton’s toe-tapping anthem, “9 to 5,” with its uplifting promise: “The tide's gonna turn and it's all gonna roll your way.”

My friend Karen Nussbaum and I, both college-educated secretaries, were key organizers of the crusade that began in Boston, one that combined ideas from the civil rights, feminist, and labor movements. Now, 50 years after our project started, we’re hoping to share it with a new generation. We are featured in a new documentary airing on Netflix, 9 to 5: The Story of a Movement, by Julia Reichert and Steven Bognar. I also wrote a new book, Working 9 to 5: A Women’s Movement, a Labor Union, and the Iconic Movie, which includes a foreword by Fonda. The film and book both tell how the 9 to 5 movement united women across race, class, and age divides, won millions of dollars in back pay and raises from corporate titans, formed a women-led union affiliated with the Service Employees International Union (SEIU) — and made countless bosses get their own coffee.

The film and book also remind us that women have always played an important role in each era of union organizing, bringing new ideas and new energy to the battle for workplace democracy.

Today, a new wave of labor organizing is in full swing. Workers are rising up on a scale not seen in decades. This includes baristas, workers in retail, fast food, warehouses, tech, childcare and home care. Domestic employees, grad students, congressional aides, and even minor league ballplayers. And a recent Gallup poll finds that 71% of Americans — including 74% of women and 68% of men — support unions, the highest level since 1965.

It may seem as if today’s new organizing has materialized out of nowhere. But we shouldn’t be surprised. Throughout US labor history, we’ve seen wave after wave of organizing by previously unrecognized groups of workers.

At the turn of the 20th century, it was women in the garment industry: Many were young, immigrant women; teenagers crowded into low-paying jobs in factories and sweatshops in New York and other cities. In 1909, in what became known as the Uprising of the 20,000, they walked out together in a massive strike. Two years later, in the Triangle Shirtwaist fire, 146 workers died as a result of unsafe conditions and a locked exit door in their factory. The deaths gave huge visibility to the women’s cause, and public pressure led state legislators to adopt some of the first workplace safety laws.

The young women’s activism led to better wages and hours, galvanized the International Ladies Garment Workers Union, and breathed new life into the labor movement, as male officials saw that women could indeed organize. The garment women’s signature song, “Bread and Roses,” features the haunting line, “Hearts starve as well as bodies; give us bread but give us roses.”

In the 1930s and '40s, when male auto workers pioneered the new tactic of the sit-down strike, a brave “women’s auxiliary” of workers’ wives, sisters, and daughters faced off with cops outside the factories and kept the strike in the news. The strikers’ victories helped inaugurate a new social contract between labor and management that lifted millions of workers — women included — out of poverty and into the middle class.

By the early 1970s, however, that contract had begun to fray. Workers felt the squeeze of stagnating wages and rising inflation. The next several generations of young people grew up expecting to be worse off than their parents.

It was at this point that millions of women began pouring into the workplace, many of them into what became known as the “pink-collar ghetto” — low-wage jobs with little mobility. Influenced by the Civil Rights and feminist movements, they wanted rights and they wanted respect.

In the newly configured economy, one in three working women was an office employee. As the clerical workforce grew by leaps and bounds, so did a sense of injustice among the women whose job it was to type, file, staple, mimeograph, and photocopy.

Women office workers were tired of low pay, discrimination, and training men to be their supervisors. A half-century before the #MeToo movement, they wanted an end to sexual harassment and the whole host of petty indignities they were subjected to. As one woman put it, “We are referred to as ‘girls’ until the day we are retired without pension[s].”

Other women workers organized too. The 1970s saw efforts such as Stewardesses for Women’s Rights, the Coal Employment Project, Wages for Housework, an organization for sex workers called COYOTE, the Coalition of Labor Union Women, and more. Female teachers, janitors, nurses, and other hospital workers organized for better pay and respect.

Many of these efforts met ferocious opposition from union-busting employers. Nonetheless, the wave of organizing that began in the 1970s led to important progress. Issues that had once been considered personal matters became matters of policy. Influenced by the growing activism, the federal government barred pregnancy discrimination and sexual harassment through key legislation and Supreme Court rulings. “Help Wanted Male” and “Help Wanted Female” ads vanished from the newspapers. Professional and managerial jobs opened up for college-educated women.

Unions — such as the American Federation of State, County, and Municipal Employees, the American Federation of Teachers, the Communication Workers of America, the United Auto Workers, the Teamsters, and the Office and Professional Employees International Union — invested new resources in organizing women, and discovered that union drives in women-dominated workplaces, especially those with a high percentage of Black women, were more likely to succeed. And women workers reaped the benefits. Women in unions are paid more than their non-union counterparts, and collective bargaining narrows the pay gap between men and women in the same or similar jobs, according to the Economic Policy Institute.

Now, once again, workers are on the march.

Today’s workers face some of the same old problems — and new ones too. Low-paying, dead-end jobs are still with us, and women and people of color are most likely to remain stuck in them. Nowadays, it can take not one, not two, but several jobs to support a family. The 24/7 job, second-by-second computerized monitoring, a relentless work pace, the lack of predictable hours, paid vacations, sick days, and pensions: All of this can make it harder to be a worker in today’s economy than it was 50 years ago.

Of course, these problems can also be energizing. As union organizers often say, “The bad boss organizes the workers.”

Persistent income inequality and the push for racial justice that took off in the wake of George Floyd’s murder have contributed to today’s organizing surge. And the pandemic shined a new light on the importance of “essential workers,” including hospital and grocery employees, and helped foster a new consciousness and sense of pride among these workers.

As with previous waves of organizing, some of today’s new worker activism takes place inside established unions and some occurs outside. The Amazon Labor Union is not affiliated with a major union, for example, but union drives among workers at more than 250 Starbucks locations have been aided by the SEIU. Workers at Microsoft, REI, Apple, Google, Trader Joe’s, and other major employers are organizing.

Other contemporary workers’ rights initiatives include Coworker.org, the Fight for $15, One Fair Wage, the National Domestic Workers Alliance, and 9 to 5 is still reaching out to women in every state. The 9 to 5 union offshoot, SEIU Local 925, has grown to represent workers in education from early learning through higher education, in local government, and nonprofits.

Women now head major unions, including Mary Kay Henry of SEIU, Sara Nelson of the Association of Flight Attendants-CWA, Randi Weingarten of the American Federation of Teachers, Becky Pringle of the National Education Association, Crystal Dunn of the US Women’s National Team Players’ Association, and Liz Shuler, who earlier this year was elected the first female president of the 12.5-million-member AFL-CIO, the largest US union federation. They and other women leaders have helped push the labor movement to prioritize pay, workplace safety, and benefits, plus issues such as flexible schedules, paid sick time, minimum staffing levels, mental health, and sexual harassment at work.

Adding wind to the sails of today’s organizing efforts is the outspoken support of President Joe Biden, who has stated, “When unions win, workers across the board win. That’s a fact. Families win, community wins, America wins. We grow.”

As the current wave of worker activism continues to gather force, the words of an old union song come to mind:

"Freedom, freedom is a hard-won thing.
You’ve got to work for it, fight for it,
Day and night for it,
And every generation’s got to win it again."