film Candyman’s Yahya Abdul-Mateen II: ‘Black People Are So Much More Than Our Trauma’

After wowing in Watchmen, the Emmy-winning actor is starring in a reboot of the timely 90s horror. ‘I want to inspire others to be magical,’ he says 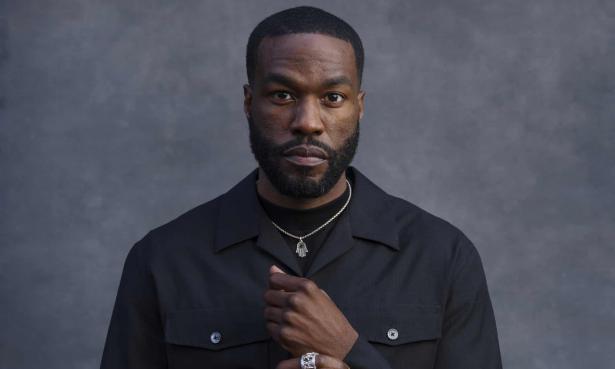 Say his name: Yahya Abdul-Mateen II. Maybe repeat it five times into a mirror? Whatever it takes: commit it to memory because Yahya Abdul-Mateen II is a name you’ll need to know. This summer he’s starring in the new Candyman movie. It’s a terrifying, timely reimagining of the urban legend about the hook-handed, sweet-toothed bogeyman, who is conjured any time some fool recites his moniker into a reflective surface.

“I do appreciate when someone takes the time to learn to pronounce my name,” says Abdul-Mateen II. The 35-year-old actor is the second Yahya Abdul-Mateen, after his late father, who took the name when he converted to Islam. The Arabic pronunciation includes the “h” sound, but Abdul-Mateen II is used to hearing it both ways: “In school I was always ‘Ya-ya’. At home I’m ‘Yahya’. If I go to the masjid [mosque] or the corner store I’m ‘Yahya’ and ‘Ya-ya’.” He laughs. “As long as people know it and it’s associated with the right things, then I’m usually all right.”

Candyman is something that he’s happy to be associated with, even if its arrival has been a long time coming. The film – featuring Abdul-Mateen II’s first lead role – was originally slated for a June 2020 release but got pushed back due to Covid-19. “I had so many expectations for 2020!” he says. “I was gonna have my movie come out, and go and do The Matrix, and I was going to take the second half off to travel the world!” It didn’t quite work out like that, obviously. “But at the same time, everybody was safe, y’know? And I think the anticipation for this film has done anything but die down.”

Indeed, as one of very few horror classics to feature a significant and complex Black lead, the following of the original Candyman has only grown since its 1992 release. The names attached to this new incarnation bring with them a fresh wave of excitement: Jordan Peele is a producer and co-writer, Nia “The Marvels” DaCosta directs, and character actor of the moment Colman Domingo (Zola, Fear the Walking Dead) plays a pivotal role. Plus, every kid who’s ever attended a sleepover has heard tell of the Candyman. Abdul-Mateen II, who is the youngest of six, recalls playing a Candyman-themed game in front of the bathroom mirror with his sisters. “No one was brave enough to get up to five. We’d get to four before someone found a clever way out.”

The character’s iconography has come to overshadow the story of the original film: a Black artist named Daniel Robitaille was brutally lynched – a beehive was involved – in 19th-century Cabrini-Green and returns to wreak bloody vengeance on the present-day Chicago housing project. “Some people remember the project [Cabrini-Green], some remember the long coat,” says Abdul-Mateen II. “Everyone remembers the hook and the bees.”

Abdul-Mateen II grew up in a New Orleans project with its own Cabrini-Green-style story of municipal neglect followed by demolition and redevelopment. His family moved to West Oakland, California, where he studied architecture at Berkeley and later worked as a city planner in San Francisco, before heeding the call of his acting vocation. It gave him a deeper appreciation of Candyman’s underlying themes.

“I definitely think the neighbourhood researcher part of my brain prepared me,” he says. “The first thing that I did when I got to Chicago was walk around [what used to be] Cabrini-Green.” Like his character, Anthony, he took along a camera and notebook to the now redeveloped section of the city’s North Side. “And there were no Black people there, like none. It was amazing to just imagine the people who have been turned into ghosts in this place where they are from. For some of the older residents there still, they’ve been other-ised on their own property. It has to be a strange and an eerie feeling.”

Gentrification is a theme in the original movie, but the 2021 Candyman delves deeper into its contradictions and nuances, revisiting many of the same real-life locations – or rather, what’s left of them – and centring a hip, smart Black couple. He’s Anthony, an up-and-comer on the Chicago art scene; she’s Brianna (Teyonah Parris), a dynamic gallery curator. And while the 1992 film’s protagonist was a white graduate student (Virginia Madsen) who gingerly visited the projects to research her thesis, these guys have moved into a loft-style Cabrini-Green apartment without much understanding of the area’s dark past. Candyman will soon provide a history lesson, of course. What happens when people are made to feel unwelcome in their own communities?

Candyman was born out of a shared sense of purpose with Jordan Peele. After Abdul-Mateen II auditioned unsuccessfully for Get Out, Peele cast him in his 2019 follow-up, Us, and kept him in mind for bigger things: “I look up to him because he is an artist, a director, who has a mission,” says Abdul-Mateen II. “People wanted him to do comedy and he said: ‘No, I want to do horror and I want to tell the stories that I care about, through the horror genre.’ It takes a lot of guts to do that.”

Had Candyman been released last summer as planned, it would have preceded Abdul-Mateen II’s role in the SAG award-winning ensemble cast of Aaron Sorkin’s The Trial of the Chicago 7. He gave a haunting performance as Black Panther Party co-founder Bobby Seale, who was bound, gagged and denied counsel during the 1969 political show trial. But arriving after that film, Candyman feels like the culmination of this and all his other roles, combining the thrills of popcorn cinema with a thoughtful re-examination of this turbulent half-century in the US.

You might first have seen him in Baz Luhrmann’s 70s-set Netflix series The Get Down. That seemed like his big break but it was cancelled after just one series. There followed small roles in the 2017 movies Baywatch and The Greatest Showman, then slightly bigger roles in Black Mirror and Aquaman (2018). At the first script read, the part of Cal, the handsome and supportive husband to police office/vigilante Angela Abar, in HBO’s Watchmen seemed like another supporting role, but Abdul-Mateen II decided to do it anyway: “It was the chance to work with Regina [King, who plays Angela], honestly,” he says. It was only after several weeks of shooting that his character’s hidden layers and personas were revealed – not least in scenes that called for full-frontal, blue-skinned nudity.

Watchmen was soon acclaimed as a sophisticated superhero thriller and critique of fascist ideology, while Abdul-Mateen II went on to win the Emmy for best supporting actor.

“It doesn’t hurt at all to have an Emmy on the table when I’m in negotiations for projects,” he notes. But he doesn’t credit the award with his changing approach to selecting roles: “I think, Emmy or not, I would have still come to the place where I am now: just making sure that I have time to live a life, so that I can find inspiration to bring back into my work.”

Abdul-Mateen II has since filmed roles in action flicks such as the Mad Max prequel, Furiosa, the Michael Bay-directed heist film Ambulance and the top-secret new Matrix instalment (“I wish I could tell you about it … But I dug it!”), all requiring him to maintain his now famously buff physique. He was a student athlete, running hurdles at Berkeley; perhaps he enjoys the opportunity to train? A weary grimace suggests otherwise. “We’re in a space in film where you’ve got to work out, and look good and get the muscles,” he says with a sigh. “I’m still waiting on that ice-cream role: the role where I can sit back and watch TV and eat ice-cream and that’s gonna be my preparation!”

If he’s looking to put his beefcake days behind him, however, Candyman won’t quite do it. Tony Todd in the original film was a kind of romantic antihero – murderous, yes, but sexy with it – a sexiness that Abdul-Mateen II skilfully reprises thanks to his Men’s Health cover-model looks. Still, he classes Candyman alongside his more overtly political work as a career landmark: “I think, after doing Watchmen, The Trial of the Chicago 7 and my experience on Candyman, I really did enjoy being a part of conversations around social change and representation of Black people in film.”

Nor does he feel this revelation should limit him to 1960s-set political dramas or abject depictions of slavery: “Trauma has been, obviously, a very, very real, visceral part of the Black experience in America, but we’re so much more than our trauma. What about joy? And love? And what about magic and hopefulness and possibility? And the everyday mundane? Those are equally the stories that I care about bringing into the world, and that I plan to produce and develop.”

He won’t be doing it alone. First on his slate is The Scent of Burnt Flowers, a six-part TV adaptation of the debut novel by Blitz Bazawule, who co-directed Beyoncé’s 2020 visual album, Black Is King. Abdul-Mateen II will star in and exec-produce, with Bazawule also attached to write, direct and exec-produce. Bazawule, like Peele before him, is the kind of like-minded collaborator with whom Abdul-Mateen II seeks to surround himself: “I’m working on building my tribe of creatives – writers, directors, actors, producers and the like – so that we can figure out collectively what it is we want to say.”

Like the erstwhile architect he is, Abdul-Mateen II also knows how to think big and sketch out a detailed plan: “Seeing superhuman or magical roles and narratives being inhabited by African-American actors – it’s really awesome to be a part of that. Creatives see it, executives see it, but, most importantly, the community sees it, you know? We can inspire others to be magical – in their creative process but also in life as well.” Combine that vision with the kind of leading man energy that will always find its way to top billing, and even a global pandemic couldn’t knock him off his trajectory.

Candyman is in cinemas from Friday 27 August