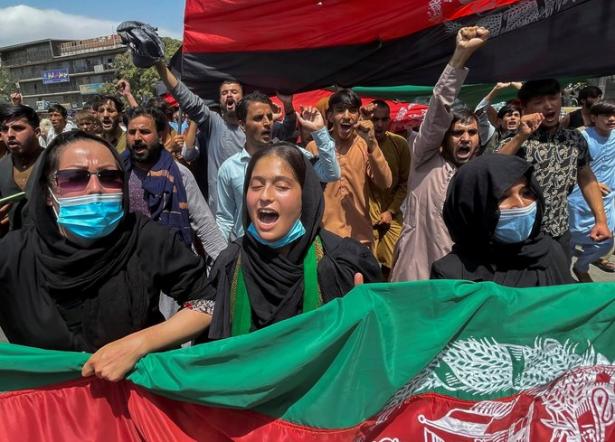 Flying the flag, defying the Taliban in Kabul. Credit, REUTERS/Stringer.

[The authors are youth climate activists from Sweden, Mexico, Bangladesh and Kenya, working with the international youth-led Fridays For Future movement.]

Last week, some of the world’s leading climate change scientists confirmed that humans are making irreversible changes to our planet and extreme weather will only become more severe. This news is a “code red for humanity,” said the United Nations secretary general.

It is — but young people like us have been sounding this alarm for years. You just haven’t listened.

On Aug. 20, 2018, one child staged a lone protest outside the Swedish Parliament, expecting to stay for three weeks. Tomorrow we will mark three years since Greta Thunberg’s strike. Even earlier, brave young people from around the world spoke out about the climate crisis in their communities. And today, millions of children and young people have united in a movement with one voice, demanding that decision makers do the work necessary to save our planet from the unprecedented heat waves, massive floods and vast wildfires we are increasingly witnessing. Our protest will not end until the inaction does.

For children and young people, climate change is the single greatest threat to our futures. We are the ones who will have to clean up the mess you adults have made, and we are the ones who are more likely to suffer now. Children are more vulnerable than adults to the dangerous weather events, diseases and other harms caused by climate change, which is why a new analysis released Friday by UNICEF is so important.

The Children’s Climate Risk Index provides the first comprehensive view of where and how this crisis affects children. It ranks countries based on children’s exposure to climate and environmental shocks, as well as their underlying vulnerability to those shocks.

It finds that virtually every child on the planet is exposed to at least one climate or environmental hazard right now. A staggering 850 million, about a third of all the world’s children, are exposed to four or more climate or environmental hazards, including heat waves, cyclones, air pollution, flooding or water scarcity. A billion children, nearly half the children in the world, live in “extremely high risk” countries, the UNICEF researchers report.

This is the world being left to us. But there is still time to change our climate future. Around the world, our movement of young activists continues to grow.

In Bangladesh, Tahsin Uddin, 23, saw the impacts of climate change in his village and other coastal areas and was moved to action. He is passionate about climate education and has created a network of young journalists and educators to spread awareness, all while organizing cleanups of waterways teeming with plastic waste pollution.

In the Philippines, Mitzi Jonelle Tan, 23, has had to complete her homework by candlelight as typhoons raged outside and wiped out her community’s electricity. She told us there were times she was afraid of drowning in her own bedroom as water flooded in. Now she is leading youth in her country to respond to the aftermath of those typhoons and other hazards through sharing food, water, clothes and support with the most affected communities.

In Zimbabwe, Nkosi Nyathi, 18, is worried about a potential food crisis if weather patterns continue. Heat waves made school a challenging experience for him and his peers. Now he speaks to leaders from around the world to demand the inclusion of young people in decisions that affect their future.

The fundamental goal of the adults in any society is to protect their young and do everything they can to leave a better world than the one they inherited. The current generation of adults, and those that came before, are failing at a global scale.

The Children’s Climate Risk Index reveals a disturbing global inequity when it comes to the worst effects of climate change. Thirty-three countries, including the Central African Republic, Chad, Nigeria and Guinea, are considered extremely high-risk for children, but those countries collectively emit just 9 percent of global carbon dioxide emissions. The 10 countries with the highest emissions, including China, the United States, Russia and Japan, collectively account for nearly 70 percent of global emissions. And children in those higher-emitting states face lower risks: Only one of these countries, India, is ranked as extremely high-risk in the UNICEF report.

Many higher-risk countries are poorer nations from the global south, and it’s there that people will be most impacted, despite contributing the least to the problem. We will not allow industrialized countries to duck responsibility for the suffering of children in other parts of the world. Governments, industry and the rest of the international community must work together to reduce greenhouse gas emissions, as 195 nations committed to do in the Paris Climate Agreement of 2015.

We have less than 100 days until the U.N. Climate Change Conference, also known as COP26, in Glasgow. The world’s climate scientists have made it clear that the time is now — we must act urgently to avoid the worst possible consequences. The world’s young people stand with the scientists and will continue to sound the alarm.

We are in a crisis of crises. A pollution crisis. A climate crisis. A children’s rights crisis. We will not allow the world to look away.

If Not Us, Who? features studies on the new class-conscious feminism and labour struggles during the COVID-19 pandemic, and reports from France, the US, Germany, Japan, Chile, Brazil, Colombia, Israel, Iraq, Iran, the Philippines, Russia, Argentina, Spain, Indonesia, South Korea, and more.

Jagmeet Singh’s proposed policy would tax anyone making over $210,000 at 35 per cent per year. It would also slap the super-rich — anyone with over $10 million in wealth — with the one per cent wealth tax on anything over that amount.

Millions of young women across the African continent have found a common voice for community building, organizing, and mobilization, taking advantage of the steady increase of internet penetration and the proliferation of cheaper smartphones.

Police clash with protesters demanding the resignation of PM Prayuth Chan-ocha. ‘We’ll keep coming back’, vow protesters, but the army-backed leader is giving no ground and the casualties are mounting.

The governments of British Columbia, Canada and the Haida Nation announced a new framework agreement that recognizes the nation’s inherent title and rights across the archipelago of Haida Gwaii, which translates to “islands of the people” or “islands coming out of concealment.”

A national strike in late April sparked a mass movement against entrenched inequality and police repression, drawing thousands of people to the streets. Over the last few months, protesting Colombians have formed popular assemblies to demand change in their communities and beyond.

In recent years authorities have arrested countless environmental protesters, whistleblowers and concerned citizens. A sector is working quietly and fearfully to navigate a government hypersensitive to any criticism.