film Candyman Comes For the Privileged

In director and cowriter Nia DaCosta’s new Candyman, the body count mostly includes those who repeat the practices of systemic cruelty and racism that led to his lynching and other hateful deaths. 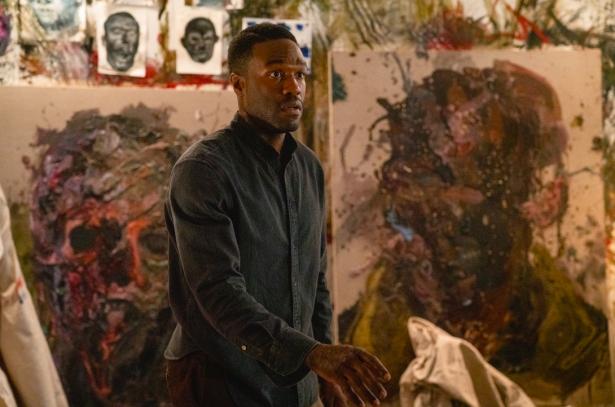 The frightening thing about Candyman is that you bring him on yourself. In the mythology of this horror saga, the victim literally dares the vengeful spirit of a murdered Black man to appear by saying his name five times in front of a mirror. In director and cowriter Nia DaCosta’s new Candyman, the body count mostly includes those who repeat the practices of systemic cruelty and racism that led to his lynching and other hateful deaths.

The bloodthirsty spirit with a hook for a hand and a swarm of bees crawling all over him killed indiscriminately in the original 1992 film. DaCosta’s new Candyman, which picks up the same story nearly three decades later, makes the murderous urban legend more of a seeker of rough justice. His victims aren’t necessarily racists—they might have even voted for Obama for a third term if they could have. But they are also the exploiters who profit off Black suffering. They are the gentrifiers, the cultural appropriators, the wrongful accusers, and even the shallow microaggressors. Candyman has room on his hook for all of them.

DaCosta laughs nervously when asked about adding a sense of righteousness to her supernatural monster. “Oh man, well, I can never condone cold-blooded murder…” she says. “I mean, being rude to a guy isn’t an excuse to be killed.” But she also concedes: “We definitely wanted there to be some form of imperfect catharsis in the way that Candyman operates.”

After all, horror isn’t about making the punishment fit the crime; it’s about taking things to symbolic extremes. The slasher genre in particular has always been about the high price people pay for low behavior. In Candyman the transgressions that get the hook are of the bigoted and selfish variety.

Yahya Abdul-Mateen II (HBO’s Watchmen) stars as an artist who pulls inspiration from the Candyman legends for his new series of paintings and installations. He learns that once such rage is unleashed, it is impossible to control—and sometimes it consumes the innocent as well. “I did want to avoid that sort of binary feeling like everyone who got killed deserved it,” DaCosta says. “To me it was more, violence begets violence, and the violence touches everyone.”

The original film, just like the Clive Barker short story that inspired it, was about a folklore academic (Virginia Madsen) who runs afoul of the spirit while investigating the meaning behind some haunting inner-city graffiti. Race wasn’t specified in Barker’s story, but in the movie the researcher was white and most of the residents of the neighborhood were Black—among them a young mother played by Vanessa Williams, who reprises her role in the new movie. (“Shh!” she says in the trailer after hearing the name “Candyman” just once. “Don’t. Don’t say that.”)

DaCosta has clear affection for the earlier adaptation, but there were some things about it that bothered her. “What struck me about the original film was how he mostly was preying on his own community,” she said. “In expanding the legend and creating a bigger story about racial violence as a whole, it definitely shifted us away from, you know, seeing people in the hood getting killed. Part of that was wanting to flip on its head what happened in the [1992] film.”

So yes: This Candyman stands for something, which is why DaCosta and her cowriters and producers, Jordan Peele and Win Rosenfeld, added a new dimension to the lore. The vengeful spirit is actually many spirits—many different innocent Black lives that were taken through violence—now manifesting in the form of Daniel Robitaille (played by Tony Todd in both films), a Black man who was tortured in the 1800s by a mob that cut off his hand, replaced it with a hook, and drenched him in honey to be stung to death by bees.

“Candyman’s about lynching—period. That’s what it’s about, that’s the core evil that brought this demon to us. It’s very standard horror storytelling,” DaCosta told Vanity Fair last year for a feature on the power of Black horror storytelling. “But when you’re going to talk about lynching, you can’t just say, ‘It’s a horror movie’ and move on. For me, it was really important to very carefully balance the humanity and real life with the horror and the genre.”

It’s a brutal subject that must be explored delicately. Some Black horror films and TV shows have faced a backlash for going too far and exacerbating trauma rather than alleviating or reckoning with it—most notably the Amazon series Them, about unspeakable things that happen to a Black family in a murderous white neighborhood.

DaCosta uses the abstraction of shadow puppets to depict the worst of the violence against the innocent Black people whose unjust and infuriating demises fuel the Candyman rage-spirit. Her personal guideline was simple: The more a death in the film paralleled a tragedy that actually happens, the more DaCosta felt an obligation to abstract it. “It’s about racial violence, it’s about that trauma. So you can’t shy away from it or pretend it’s not there. But I felt a responsibility to do it with respect and acknowledgment,” she said.

Confronting agonizing real-life subjects requires sensitivity, says Tananarive Due, a Vanity Fair contributor who teaches a course on Black horror at UCLA. She also has written her own frightening novels (The Good House, The Between) and cowrote an episode of Peele’s Twilight Zone. A champion of Candyman, Due also credits Peele’s Monkeypaw Productions for the appropriate depictions of Black trauma in his films, Get Out and Us.

“They’re exploring horror stories through a Black lens. They’re entertaining on the surface, but there’s also a lot of depth,” Due says. “And they go out of their way to avoid bloody, violent images against Black people. It’s not that they’re not violent. It’s not that Chris [Daniel Kaluuya’s character in Get Out] didn’t get bloody. Sure, he got bloody. I mean, hell yeah, Lupita [Nyong’o] got bloody in Us. But there’s a very big difference between that and, say, if DaCosta had chosen to lean into a flashback of what happened to the original Candyman with his lynching, where it’s in our faces.”

Even when it’s done with good intentions, DaCosta agrees that going too far is alienating to Black audiences rather than empowering. Abdul-Mateen’s painter in her Candyman is actually an example of what happens when artists don’t fully understand the pain they’re recreating. “I’ve sat in the movie theater and seen depictions of Black people getting brutalized in order to inform or educate, or to tell a story. And I’ve been so hurt by it, frankly,” she says. “And so I knew going into this, I wanted to be really clear about the line between the real-world traumas and then the fun sort of horror trauma.”

Once again: DaCosta is not advocating death-by-angry-ghost for anyone. Her movie is about being aware—being careful about how you conduct yourself and what you put out into the world, since eventually it will come back to you.

While the Candyman spirit does occasionally spare the innocent Black bystander, there are plenty of people of color in the story who invoke his wrath. Abdul-Mateen’s artist character, Anthony McCoy, gets pulled into the maelstrom, as does his girlfriend, Brianna Cartwright (WandaVision’s Teyonah Parris), a gallery director whose success has allowed her to live a life of wealth on the ruins of others in their now upscale Chicago neighborhood—whether she realizes it or not. They’re not bad people, but they have massive blind spots, and DaCosta’s story demands her characters examine themselves. “The mirrors absolutely metaphorically have that meaning,” she says.

What they see reflected back may determine their fates. “Candyman is so much about identity, especially for Anthony in this movie. It’s sort of a weird, terrible coming-of-age story for him,” DaCosta says. “Brianna, who’s bought this amazing apartment in the development that’s happened around Cabrini-Green after the towers have been demolished, is also a part of this wave of gentrification.”

Another key character, William, a neighborhood old-timer played by Colman Domingo, has lived virtually his whole life in the shadow of Candyman, since his own actions as a boy led to the violent death of a man who had done nothing wrong. Still, that boy unwittingly caused another lynching. He has been haunted ever since, in more ways than one.

“Young William is a perfect example of what happens when members of the community or witnesses become unknowing accomplices to murder when they call the police,” Due says. “William, as a child, screaming out and carrying that burden of conscience is actually a very real thing. He’s a part of the mythology from the time he’s a kid, just because he was a bystander who got startled.”

One difference between these characters and Candyman’s other victims is that these three people are trying, in their own ways, to make amends. “Everyone in the movie has this sort of base pain, this wound," DaCosta says. "And everything they do throughout the film is their way of trying to heal it, to varying disastrous degrees.”

The others—the exploiters, appropriators, and aggressors who attract Candyman’s attention—don’t have the same excuse. They may not deserve the full force of what happens to them, but there is a cost for the wrongs they’ve done. And Candyman believes in taking much more than an eye for an eye.