labor Redefining Work to Save the Planet

We upended our lives during the pandemic, but our response to what we know is happening to the planet has remained business-as-usual. 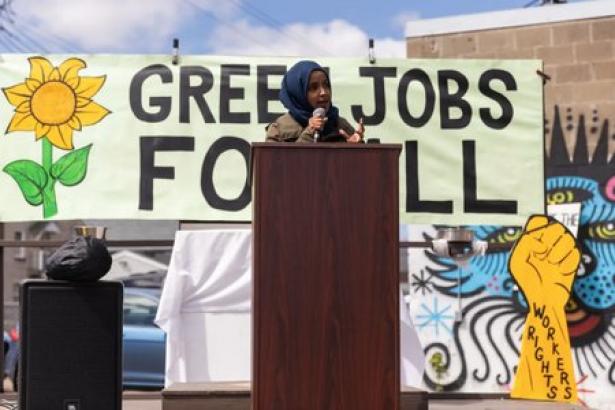 All summer, fed-up employees across the United States have been refusing to work. From frustrated food service employees to exhausted factory line workers, they are banding together to push back against punishing schedules, precarious conditions and unresponsive management.

Despite these workers being lauded as “essential” at the onset of the pandemic, major news outlets have been more interested in billionaires’ private space-race than in covering, say, Western farm pickers’ petition to OSHA for extreme-heat protections or the Teamsters’ drive to unionize Amazon workers nationwide.

Meanwhile, the urgency of climate change is only growing more intense. And, with so many workers across the country struggling against subsistence wages and conditions, the prospect of organizing a society-wide response to meet the emissions reductions outlined in the latest IPCC report still seems far off. We upended our lives during the pandemic, but our response to what we know is happening to the planet has remained business-as-usual.

Government can and should assume a much larger role, coordinating industries and reshaping markets to address our urgent threats while guaranteeing better, more humane and socially beneficial work for all. This is precisely why the demand for a Green New Deal was never limited to energy transition alone: it was also tied to quality of life issues such as raising the minimum wage and providing universal health care access.

The term evokes a broader realignment between labor, government and the private sector — as occurred during the Great Depression — that would unleash the nation’s untapped potential. If our red-hot summer of wildfires, heatwaves and labor confrontations underscores anything, it’s to drive home the wisdom of the Green New Deal.

To climate groups including the Sunrise Movement, along with House progressives, the program is an important downpayment towards a Green New Deal. They know that redirecting labor toward urgently-needed green and care work, broadly popular among voters, can provide much-needed alternatives to the unrewarding roles many Americans face in today’s economy.

The scope and seriousness of the Civilian Climate Corps is still uncertain — Biden’s proposal only provided for up to 20,000 jobs for young people, at most. At its peak in 1938, meanwhile, the New Deal-era Works Progress Administration put three million Americans to work building roads, bridges and housing.

Learning from the pandemic, we must also look to redefine our relationship to work, more broadly. Here again, New Deal-era achievements like the 40 hour work week should be our guiding inspiration. Reducing the workweek from 40 hours to 32, for example, has been shown to help lower carbon emissions; it’s a model that’s already being tested, with positive results, in Iceland and Spain. Other measures, such as a universal basic income or a social guarantee for essential services like housing and health care, should also be considered.

The climate emergency forces us to permanently shift how we think about economic prosperity. There’s no more runway for “business as usual”; our real work now is to rapidly and equitably pull back from the planetary brink. By redefining the role of work, we can unleash our collective talent and ingenuity and realign the economy toward the common good.

Jared Spears is a writer whose articles and essays on work and ecology have recently appeared in Public Seminar, Society + Space, and elsewhere.

Rather, we depend on people like you. Reader support makes up more than half of our budget, Your support allows us to dig deep on the stories that matter most.