California Attempts to Rein in Exploitation of Truck Drivers 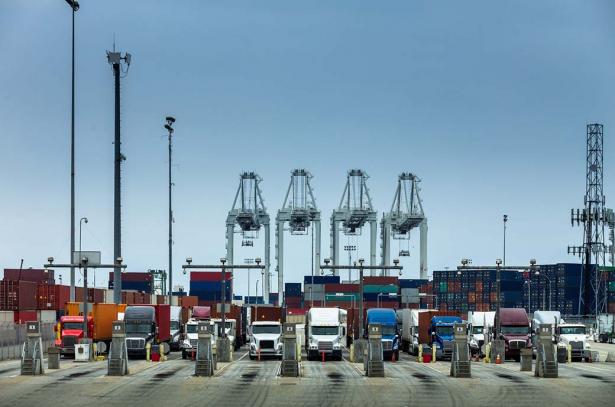 Like many truck drivers delivering goods from the ports of Long Beach and Los Angeles to big retailers throughout Southern California, Juan Carlos Giraldo has a contract job, and it looks decent at first glance. His primary employer, Container Connection, pays a flat fee of $300 for a round trip from a port to a Walmart warehouse in Mira Loma. With no traffic or wait times, the trip takes four hours, which means Giraldo can make 10 round trips a week. In the best case scenario, he earns $3,000.

But the best case scenario usually doesn’t happen. Long waits at the port are routine, because his dispatcher doesn’t let him know when a shipment is ready to load. If Walmart doesn’t have an empty container ready to bring to the port, he earns half of his round-trip fee: $150. As a contract worker, Giraldo is responsible for insurance on the company truck and goods, which is $180 per week. Fuel averages $300-$400 a week, also out of his pocket. He has to cover health insurance for himself and his family and fund his own retirement. He has no disability benefits, which is risky in a job requiring manual labor. He is essentially paying to work, and if the company doesn’t give him any assignments, “I will have negative income that week,” Giraldo told Capital & Main through an interpreter.

Giraldo, a father of four, wants to be an employee, and says Container Connection has misclassified him and other drivers as independent contractors. The California Employment Development Department (EDD) also determined that Giraldo should be an employee. As for why he doesn’t go to another company, Giraldo says it wouldn’t make a difference. “Most companies operate on the contractor model and not many opportunities to be an employee. They have rigged the system for themselves.”

Container Connection, which delivers goods to Southern California retailers including Walmart, Ross Dress for Less and for brands Toyota, Whirlpool and Hanes, has a long record of worker misclassification judgments and findings of labor rights violations. It is also the object of an April 14 strike honored by ILWU dockworkers. Giraldo himself was part of a Cal OSHA complaint in March, saying the company failed to protect its workers from COVID-19. Neither Container Connection, nor its parent company, Universal Logistics Holdings, responded to requests for comment.

By classifying workers as independent contractors, rather than employees, companies can avoid the cost of unemployment and other taxes, as well as workers’ compensation insurance.

Container Connection is not the only company in drayage (ship-to-warehouse) trucking accused of routinely skirting labor laws at ports in California and elsewhere in the U.S. A 2017 USA Today series and a short video documented misclassification that resulted after the ports implemented new clean truck requirements, leading the truckers to become what the reporters call “modern-day indentured servant[s].” A report on the trucking workforce by the UC Berkeley Labor Center estimated that nearly a quarter of California truck drivers are misclassified as independent contractors, a practice that deprives the state of tax revenue and threatens California’s ambitious climate goals. And a white paper by the BLS Monthly Labor Review  earlier this year highlighted significant variations in wages among all truckers and declared the trucking market “broken.”

By classifying workers as independent contractors, rather than employees, companies can avoid the cost of unemployment and other taxes, as well as workers’ compensation insurance. Trucking companies also don’t have to pay contract truckers for lost time waiting at the ports for shipments, or cover their insurance for lost or damaged cargo. Companies can be fined by the state for misclassification, but they factor penalties into the cost of doing business, critics say.

Three bills up for a vote this week in the California Legislature aim to prevent three aspects of what advocates call exploitation of port drivers. Sponsored by the BlueGreen Alliance, Teamsters, the Los Angeles Alliance for a New Economy (LAANE) and other workers’ rights groups, the bills would give trucking companies less incentive to misclassify full-time drivers as contractors. (Disclosure: The Teamsters are a financial supporter of this website.)

The first bill, SB 338, introduced by state Sen. Lena Gonzalez (D-Long Beach), was created to strengthen a 2018 law that created a blacklist of trucking companies accused of misclassifying employees. That law made retailers contracting with these companies liable for classifying their drivers like Giraldo as independent contractors rather than employees. But it also allowed alleged violators ample time to appeal before appearing on the blacklist, according to Scott Cummings, a law professor at UCLA with a specialty in local government law.

“Courts take up the matter, but the trucking industry has the money to play the long game,” Cummings says. “Proving misclassification is time consuming and backward looking. Lawsuits don’t transform the industry.”

Cummings, who authored a book on the L.A. ports campaign, says SB 338 is designed to place legal responsibility on the “most powerful economic actors in the retail chain,” the retailers who are receiving the goods. The reason, he and other industry critics say, is that many smaller trucking companies have a habit of going out of business and returning under another structure before they’re hit with fines. And, if they’re ultimately fined for violations, they keep doing business as usual.

“Widespread worker misclassification has left drivers without a safety net. It is not enough to just say we value essential workers — our legislation must match our rhetoric.”

A second bill, AB 794, introduced by Assemblymember Wendy Carrillo (D-Los Angeles), directs the California Air Resources Board (CARB) to develop workforce standards that trucking companies must meet if they want state incentives for buying low emission vehicles.  A third bill, SB 700, would, as its author, state Sen. María Elena Durazo (D-Los Angeles) says, minimize the incentive to misclassify drivers by making trucking companies cover payroll taxes for unemployment insurance, not the driver. Bringing up the havoc wreaked on truckers by COVID-19, Durazo said, “Widespread worker misclassification has left drivers without a safety net. It is not enough to just say we value essential workers — our legislation must match our rhetoric.” SB 700 makes trucking companies, rather than the drivers, pay for payroll taxes for unemployment insurance.

Deregulation Led to a “Sea of Sharks”

The trucking industry generally and the drayage industry specifically has run on an “independent owner-operator” system for decades. A white paper written by the Los Angeles Alliance for a New Economy (LAANE) concludes that, even when courts side with drivers in worker misclassification claims — which they routinely do — trucking companies rarely change their practices.

“Trucking (companies) factor fines into the cost of doing business,” says Jessica Durrum, director of LAANE’s Our People Our Port campaign. Durrum points out that misclassifying drivers as independent contractors hurts taxpayers, too, “because some companies are not paying payroll taxes, and it hurts good companies swimming in a sea of sharks.”

The industry didn’t always treat drivers this way. Through the 1970s most truckers were unionized, and most companies that employed them were Fortune 500 companies. The industry functioned like a utility, according to Steve Viscelli, a lecturer in economic sociology at the University of Pennsylvania.

Viscelli, who embedded himself in the industry and actually drove a truck, published his experiences in a book. He says the industry has, for decades, been in a race to the bottom. “We saw big turnover in drivers, like 100% in a year,” he said. “Companies have average stays of six months.

“In the 1970s drivers went home every night. Now they live out of the truck.”

Not every trucking company takes the low road in classifying truckers. Some are voluntarily hiring drivers as employees, possibly responding to an industry-wide labor shortage.

What changed was deregulation, starting with the Motor Carrier Act of 1980. The Federal Aviation Administration Authorization Act of 1994, or AAAA, mandated that no state can pass laws affecting the pricing of any motor carrier, effectively tying the hands of state and local lawmakers across the country wishing to change wage and labor laws affecting truckers. The Ninth Circuit Court of Appeals has temporarily stopped the state’s sweeping employment law, AB 5, from applying to California truckers, citing federal laws prohibiting wage changes. Part of the Port of Los Angeles’ Clean Truck Program — the part mandating that trucking companies make all their drivers employees — was struck down by the Ninth Circuit Court of Appeals in 2011, saying AAAA prohibited changing worker classification.

According to Viscelli, industry deregulation increased volatility and inefficiency.

“We hear the big lie that deregulation results in more efficient use of labor,” he says. “No, it shifts costs of inefficiency onto workers, because there is no incentive for schedulers to be efficient.” An example of that is when drivers like Giraldo wait for hours — unpaid — at the port for a shipment to be ready.

Both Viscelli and Cummings believe the trio of bills making their way through the Legislature, especially the one strengthening accountability for retailers using trucking companies that violate the law, will help curb worker misclassification. But they agree that tweaking AAAA at the federal level is necessary for widespread industry change. Viscelli advocates a federal floor for trucking wages and the ability for states to go above it. Cummings said that the three trucking bills in Sacramento would help, but the best solution would be to amend AAAA to let cities and states set labor standards for truckers.

Unfortunately, there’s no effort in Congress to change federal regulations affecting trucking employment and wages. Meanwhile, state courts — and, possibly, the Supreme Court — will continue clarifying the line between federal law and efforts by states and cities to pass new laws. California’s AB 5, which, ironically, was written after the state Supreme Court determined that a trucking company had misclassified its workers, cannot be enforced until the U.S. Supreme Court weighs in.

Even critics of the industry point out that not every trucking company takes the low road in classifying truckers. Some are voluntarily hiring drivers as employees, with benefits, possibly responding to an industry-wide labor shortage, which Viscelli says is more of a retention shortage. “We have three times the number of workers we need, but they have been burned. After decades of treating (truckers) badly, the industry is surprised that they aren’t eager to come back to work.”