Covering up wrongdoing in the name of unity and as a strategy against the junta will only ensure that past injustices are perpetuated and that military rule will live on indefinitely. 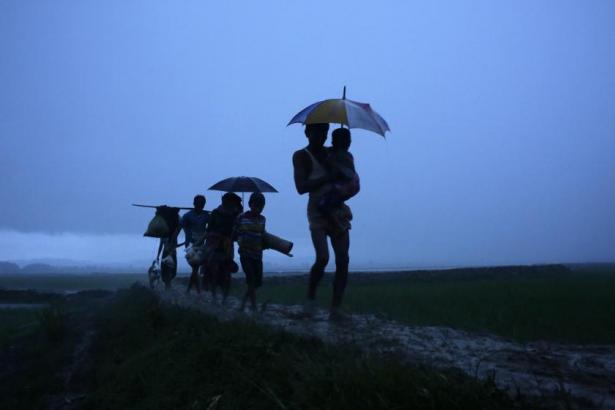 A family of Rohingya refugees arrives in Bangladesh after fleeing Myanmar military attacks in September 2017 , EPA-EFE

The formation of Myanmar’s National Unity Government (NUG) by elected members of parliament, ethnic and civil society leaders, and representatives of the Civil Disobedience Movement and General Strike Committees of the Spring Revolution was a historic moment. For the country’s diverse communities, it offered real hope that a genuine federal democracy—one that guarantees and protects their rights— can be established. As a moral as well as a political guide, the NUG must therefore transparently communicate to the people of Myanmar what and who it stands for.

To live up to its historic role, the NUG must now face the lack of justice and accountability that have allowed the Myanmar military to commit grave crimes against ethnic communities, including the Rohingya, for decades. For far too long, the military has acted with total impunity.

The last decade has seen the enactment and maintenance of racist, Islamophobic, and misogynistic legal frameworks that have served to enable the military’s most egregious abuses. The four “Race and Religion Protection Laws” adopted in 2015 built on the 1982 Citizenship Law to enshrine deeply discriminatory attitudes against a segment of the population; together with the empowerment of extremist Buddhist nationalists, they laid the groundwork for the incitement of anti-Muslim violence and the Myanmar military’s “clearance operations” against the Rohingya in 2017.

The genocide of that year went beyond the horrific crimes routinely committed by the military in ethnic areas for decades. More than 800,000 Rohingya were systematically murdered, raped and expelled from their homeland and a system of apartheid was created in which those who remained in Myanmar were confined to internment camps.

When it was in power, the National League for Democracy (NLD) remained silent in the face of the military’s grave crimes, particularly those committed against the Rohingya. Rather than cooperating with international mechanisms to hold the military accountable, the ruling party defended the generals at hearings held by the International Court of Justice. It even intentionally avoided using the term “Rohingya”, in line with state attempts to erase Rohingya identity. The NLD government did not repeal racist laws, despite having the capacity to do so with their parliamentary majority.

The culpability of the previous NLD government needs to be addressed head on. Covering up wrongdoing in the name of unity and as a strategy against the junta will only ensure that past injustices are perpetuated and that military rule will live on indefinitely.

We have seen some signs of hope. The NUG has adopted a policy paper on the Rohingya that is a positive start in acknowledging their rights, ending systemic efforts to oppress and exclude them, and recognizing the atrocity crimes that they have faced. It is encouraging that the NUG has moved towards achieving justice and accountability by working to become a party to the Rome Statute. However, more concrete steps must be taken.

It is precisely because the military has never faced any significant consequences for its crimes against the Rohingya and other ethnic groups that it is now able to inflict horrific atrocities against the rest of the population. Justice and equality for the Rohingya will serve not just the Rohingya alone, but also all the other peoples of Myanmar.

This is the moment for the NUG to start building the foundation for an inclusive, federal, and democratic Myanmar. The NUG’s declaration that it will grant the International Criminal Court jurisdiction to prosecute crimes dating back to 2002, made in response to calls from Myanmar civil society organizations and the international community, is a welcome move. The NUG must continue on this path towards ratifying the Rome Statute of the International Criminal Court and support the Court’s procedures in order to bring the perpetrators of serious crimes to account.

The NUG and the Committee Representing Pyidaungsu Hluttaw (CRPH) should use their power now to repeal racist laws such as the 1982 Citizenship Law and the four “Race and Religion Protection Laws”. These laws are not only racist and xenophobic, but also perpetuate gendered discrimination and violence and violate the rights of children, while subscribing to the misogynistic and patriarchal system fostered by decades of military rule.

The NUG must listen to the voices of all the people of Myanmar, including those of the Rohingya and other ethnic and religious minorities—and particularly those of the victims and survivors of crimes committed by the Myanmar military. More importantly, it is vital that the Rohingya are included in the NUG’s political processes as we work towards dismantling institutionalized systems of oppression and discrimination built and entrenched by the military. This will be essential as we reimagine an inclusive and transformative future for Myanmar that guarantees and respects the humanity and human rights of all.

As the Myanmar military has waged a nationwide campaign of terror against the country’s people, solidarity with the Rohingya has been displayed on protest banners, on social media, and in comments by public figures. On August 25, the anniversary of the start of the military’s 2017 campaign against the Rohingya, members of Myanmar civil society plan to release an open letter calling for the restoration of their rights and for the military to be held accountable for its crimes. In this way, we can begin to imagine a Myanmar that derives strength from its diversity, rather than from notions of ethnic supremacy.

The NUG must act as a beacon for this future Myanmar and take concrete actions to demonstrate its political will to ensure and guarantee the equal rights of the Rohingya. They must also recognize that the crime of genocide was committed by the military against the Rohingya in 2017 and fully cooperate with international accountability mechanisms to seek justice for the victims and survivors.

Only by doing so can the NUG ensure that when democracy is restored in Myanmar, it will be able to foster a just and peaceful society based on federal principles, inclusivity, human rights, and human dignity that we can all belong to and be proud of and keep nurturing for future generations to come.

Khin Ohmar is a Burmese activist and founder and chairperson of Progressive Voice, a Myanmar human rights organisation. As a student activist in 1988, she took part in organising the 8-8-88 pro-democracy uprising in Myanmar.

Thinzar Shunlei Yi is a youth advocate and activist. She works with a grassroots political coalition called ACDD. She has advocated publicly against the junta since the coup and is currently running a global campaign called #Sisters2Sisters, which promotes solidarity for Myanmar women in the revolution.

Myanmar Now is an independent news service providing free, accurate and unbiased news to the people of Myanmar in Burmese and English.

Independent media is under attack in Myanmar... help us hold the powerful to account. DONATE NOW